It was cold and white and looked not unlike a refrigerator for guinea pigs. It had far too many buttons. It stalled for an annoying millisecond when flipping between pages. There was no way I would ever be able to suspend my disbelief and fully enter the world of a book. And then, somewhere over Georgia, I changed my mind. 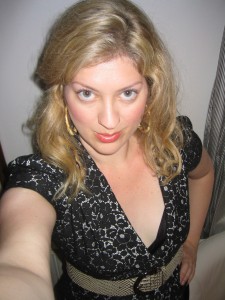 I never expected this to happen. Back in 2000, when the Powers That Be at the Radcliffe Publishing Course decreed that e-books were on their way, I threw up a little bit in my mouth. It couldn’t be! Nothing could compare to ink on paper and its relationship with the reader. Books are the fabric of the human condition, passed down through many hands. They carry an aesthetic sensibility that can never be matched. Hell, I’m an unrepentant English major engaged to a writer; we literally decorate with books.

So you can imagine my surprise when I opened my birthday present this summer and found a shiny white Kindle staring back at me.

“It’s a Kindle!” my fiancé announced, as if I’d just unwrapped our firstborn. “I thought you could use it when you travel.”

In his defense, I do spend a majority of my time in transit from one city to another. And I’m a voracious reader; a three-day business trip usually equals at least two novels and a stack of magazines. Confronted with a tiny carry-on (I refuse to check bags), this can be quite the challenge. 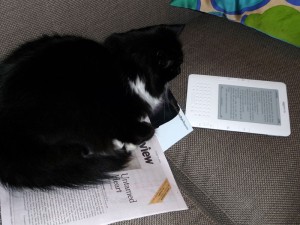 Initial research suggests that cats prefer print text as bedding. However, for reading...

But none of these practicalities made me any less distrustful of my new device. It was cold and white and looked not unlike a refrigerator for guinea pigs. It had far too many buttons. It stalled for an annoying millisecond when flipping between pages. There was no way I would ever be able to suspend my disbelief and fully enter the world of a book.

And then, somewhere over Georgia, I changed my mind. I had dutifully downloaded a bunch of trade paperbacks while still at the airport, and was finding them surprisingly palatable at 30,000 feet. Click, click, click. In addition to its portability, Kindle proved to have another major advantage over a real book – it could be held in one hand, with pages “turned” by the thumb. Leaving the other hand free for more important things, like in-flight cocktails.

Over the next few months, Kindle became a member of the family. I bought it a cute leather outfit. I carried only Kindle-sized handbags. I downloaded several books each week, regardless of my travel schedule. When misplaced, I found myself asking my fiancé, “Where is Kindle?”, as if it had once again gone rogue in the linen closet, like the cat. 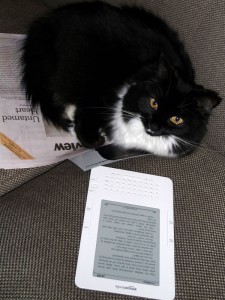 I wasn’t the only one besotted. Kindle was constantly attracting attention from strangers. From the adorable undergrad who wanted to know if it can download my textbooks (oh, sweetie, as if I’ve looked at a textbook in the past decade), to the burly businessman en route to Miami who actually climbed over a row of seats to ask if he could “just hold it for a minute to check the weight.” Um, okay.

Recently, Kindle found itself in the middle of an office retreat, wherein my work group started passing it around the table and enthusiastically clicking “next page” and “prev page” to gauge its page flipping speed. It was only later that I realized my current download was not the respectable Coetzee novel I thought I had queued up, but rather a particularly graphic installment of Anita Blake, Vampire Hunter. Kindle is many things, but it’s not discreet.

I think it’s too soon to know where the Kindle is headed. Will it become as ubiquitous as the cell phone? Who can say? I know one thing for certain: we recently celebrated another birthday at our home, and it began with a shiny white delivery from Amazon.

Lauren Hall is at work on a collection of essays, and she blogs about fashion at Lauren’s Lookbook.