"So you boys are on a quest. That's good, real good. You've got to have quests. The world has too few quests these days. We could all get off our asses and quest about some more." 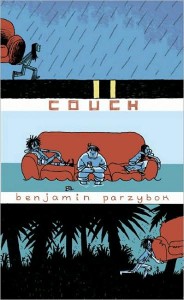 The premise of Benjamin Parzybok‘s unique debut novel is one that combines the mundane with the epic: in the process of moving an old orange couch across town, three young men embark upon a quest to save the world. Spurred on by a vivid premonition, the roommates are on their way, journeying westward from Portland, Oregon. We’re led to believe that the couch probably has a mind of its own, adding a healthy dose of magic to the mix. The twenty-something protagonists, who increasingly gain faith in their couch’s metaphysical properties, begin to allow it to determine their course of action.

Couch (Small Beer Press, 2008), a peculiar pastiche of many different genres of writing, excels at creating an external universe that is complex and off-the-wall. In addition to the playful quest narrative, Couch also has a kind of kinship to the blogosphere, message board rants of conspiracy theorists, the detective novel, and anthropological studies. This novel also has a cousin in the nonfiction accounts of wild-eyed travelers, such as the Alec Wilkinson account of the eccentric Poppa Neutrino’s journey along the Mississippi River on a trash-made raft. But Couch does not follow the path of the biography either—it follows the couch’s journey, and Parzybok does not make any excuses for that choice. In fact, he makes it seem natural.

The characters themselves fit into the archetypal personality types for three adventurers, updated for the twenty-first century: these are Tree, the mystic; Thom, the computer geek & everyman with a persistent upset stomach due to a wheat allergy; and Erik, the small-time-crook. Each possesses his own set of tools to take on the world, and each is equipped with an unconventional first name (in addition to Erik with a “k” and Thom with an “h,” there is also a Sheilene, a Shin, a Per, and others). We’re closest to Thom, a slacker/grungy dork/minor-league rebel, reminiscent of some from Rick Moody’s Garden State. Tree is a particularly sympathetic and intriguing creature—the kind of person who in our world would faithfully listen to Art Bell’s Coast to Coast. As to the larger issue of character histories though, Parzybok gives very little. It is unclear, for instance, just how well and how long the protagonists have known one another before their journey formally begins. It’s also somewhat difficult to interpret why the trip means as much to Erik as it does to Thom and Tree, who seem more connected to their calling. Couch is rooted more deeply in the trip rather than in the inner lives of the travelers.

Still, the book remains magically readable; think of the watchability of an action-hero you hope will make the right choices. Only instead of Alice versus the Queen of Hearts, or Dorothy and co. versus the Wicked Witch of the West, Couch has no classical villain, just a “weird” factor that permeates this world. The villain may in fact be idleness (even the act of sitting on the couch). There is exciting forward motion, and lots of it. Couch does, however, suffer from a common action movie malady leading up to its ending—grand secrets are revealed, but after so much novelty within earlier sections, the reader finds it hard to be continually surprised. Yet as these characters rack up additional adventures, avoiding many pitfalls, Parzybok succeeds in introducing us to a world where we have not been before. The protagonists, much like reader and author, follow the couch to the ends of the earth and also towards a potential apocalypse.

Couch is an ambitious novel, particularly in its good-hearted search for deeper meanings: faith, politics, and the nature of existence all receive some sort of attention here. By asking readers to readjust expectations of what the novel can look and sound like, Parzybok might very well be previewing a kind of literary-adventure hybrid niche that may be back in fashion.