Journal of the Week: Hobart

Michael Rudin presents Hobart, our latest Journal of the Week. The journal's ability to curate badass, cutting-edge narratives has helped this modest upstart grow out of Founding Editor Aaron Burch’s bedroom into a full-on web/print literary journal and publisher. Between the labyrinth of booths and the exhaustive list of panels and the hungry, hung-over crowds and the poets (yes, the poets), AWP can quickly stress a fiction writer out.

But know where to look and it can also take the edge off.

If there’s one clean and available, your pour will go into a fancy Hobart-branded shot glass, and if you’re lucky and he’s available, the man pouring will be Aaron Burch. He’s more than simply “Founding Editor” of the journal: the masthead confirms Burch as its official “Bourbon Drinker.” We’ve written about Burch before, reviewing his collection How to Predict the Weather, so you might be aware that beyond “Bourbon Drinker,” he’s the creator of work we’ve called “a stunning meditation on love, loss, and the potential of human imagination.” 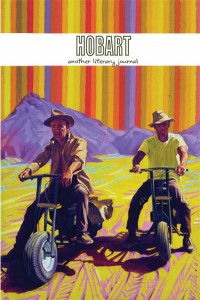 This it is not.

Only on its twelfth issue, Hobart has already been highlighted in Best American Nonrequired Reading, and not for the hilarious (dis)likes page that so many in the literary community love to check in on. It’s Hobart’s ability to curate badass, cutting-edge narratives that has helped the modest upstart out of Aaron Burch’s bedroom to grow into a full-on web/print literary journal and publisher.

The journal began with Burch and friends searching for fiction that took risks and had fun, stories that they themselves would enjoy reading. Hobart’s latest issue epitomizes that mission.

Issue #12 boasts a vast collection of voices and experimentation that do the journal’s origins proud. After kicking things off in second person with Brian Evenson and Lily Hoang’s co-authored “Your Ballad of Milt & Stanley,” in which the reader is derided for letting the action in the story take place, the storytelling and tone do a complete 180° thanks to Jim Henry’s “At Least We’ve Legs,” in which the tragicomic outcome of the most dysfunctional marriage in history unfolds unbelievably—save for the grounded, exacting voice.

And those are just the first two stories. The rest of the issue unfolds with much the same abandon for routine and rhythm. Longer stories give way to shorter stories; perspectives shift; translations pop in to say hello. It is simply a joy to read. My favorite story in the issue might be Douglas Silver’s “The View of Heaven From The Moon,” and no, not for its heavy dose of porn stars. After losing his wife to a staph infection, the protagonist’s father abandons the sex trade that brought them together for the church, throwing all his weight into finding faith and holding onto it. Meanwhile, the protagonist’s grandpa vows to disprove Apollo 11 by building a fake shuttle in the basement. It might seem like a mission fueled by dementia, but it’s actually a mission in search of distraction, much like the father’s own search for acceptance by the church. The moon, that isolated rock, is the only place more acutely lonely than the home these individuals share with one another—and there’s one being built in the basement. In lesser hands, such a cast of characters might come off as caricatures, but Silver sculpts their journey into something as human as anything I’ve read this year.

After covering PANK so recently, I was also thrilled to read Roxanne Gay’s story “North Country,” in which the theme of loneliness returns in a painfully authentic piece about a move to Michigan’s Upper Peninsula. My personal connections to the issue continued with Brian Oliu’s innovative “4 Nintendo Shorts,” an ode to Super Mario Bros and Ninja Gaiden, mega-properties from my former industry, video games.

The final story in the issue, “Rockabye” by Dave Housley, introduces readers to a mother and son addicted to reality TV, only the star is their washed-up rockstar father trying out new wives in a show modeled after The Bachelor. Heartfelt and laugh-out-loud funny, “Rockabye” is a perfect way to end the issue and a story I felt like I’d been looking for—if not for myself, for my reality-TV-loving girlfriend. So thanks, Hobart.

And thanks, Aaron Burch, for taking some time to answer our questions:

What is the role of Hobart in today’s literary community, be it for readers or writers?

Hm. I don’t know. Not to be all question-avoidy, but I don’t really like to think of writing or publishing in terms of “roles.” I don’t think of publishing as having some small hole that Hobart exists to fill or anything. I really just want it to be a journal that writers get geeked to have a story in, and readers look forward to issues and really just read and enjoy the stories enough to want to pass them along to others.

How do you see Hobart’s mission and tastes evolving in the next two years? Will the rise of digital publishing impact the composition of Hobart?

I don’t think we have a clear enough “mission” to think about how it might change or evolve. We tend to lean toward… if we have an idea for something and it excites us, we should do it. We (Elizabeth and I) are talking about, and working on, making the journal a little more all-purpose and magazine-y—we’d like more essays, interviews, profile pieces, humor pieces, comics, lists, graphics, pie graphs, etc. We’ll see how that goes from idea to actuality.

As someone who has read his last few books on either his Kindle or iPad, we’re definitely working on getting e-versions of both the journal and the minibooks. I don’t think that will really have any impact on the composition of Hobart though, it’ll just be more accessible across formats. If you could put three items in a time capsule (or USB drive) to be opened in 1,000 years, that would provide a snapshot of Hobart’s aesthetic today, what would they be?

Maybe a bottle of Buffalo Trace bourbon, a collection (a “collection” is one item, right?) of polaroids of campers, and a baseball.

What album is playing on Hobart stereo these days?

The Hobart iTunes shuffle has recently been playing some mix of Kanye, Odd Future, Modest Mouse, ISIS, Nas, Wu Tang, various movie soundtracks, Botch, and all ’90s Seattle stuff. And lots of podcasts. IWTF with Marc Maron and Comedy Bang Bang are both mainstays. Kanye and Jay-Z’s Watch the Throne is pretty solid. I feel a little left out with all the Spotify hubbub, but I usually listen to music while offline, and it doesn’t really seem like it would do anything for me there. 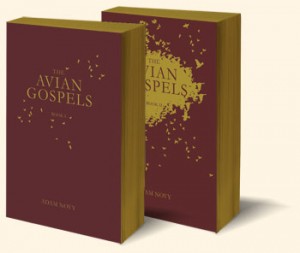 Pour yourself a big bourbon and click over to Hobart’s site for Issue #12, a slew of Issue #12 bonus content, as well as the remainder of the Hobart catalogue. It’s all ripe for the picking, along with Hobart’s minibook line-up—including The Avian Gospels, Adam Novy’s incredibly packaged (and told) story of a city cursed by a plague of birds. Bird flu this is not, but if Biblical allegory, suspense, and romance is your thing, I highly suggest packing a copy for your go-bag. It’s nifty and fits right inside.

In addition to the Hobart print site’s submission and ordering info, the website boasts its own slate of fiction, a blog, and those bite-sized (dis)likes. And if that’s not enough Hobart for you (it shouldn’t be), head to their tumblr and Facebook for more literary goodness.

As a special bonus to readers of Fiction Writers Review, we’ll be giving away three free subscriptions to Hobart! If you’d like to be eligible for this week’s drawing (and all future ones), please visit our Twitter Page and “follow” us.