"There’s a well-roundedness to each of these stories that opens up the world and invites us to participate in the everyday issues that arise."

"Chu’s greatest accomplishment through his stories of clean, well-lighted spaces is his gift for telegraphing a message of understanding, of giving the benefit of the doubt, and above all, of respecting those around us": Michael A. Ferro reviews Vincent Chu's debut collection, Like a Champion, out now from 7.13 Books.

The devil may be in the details, but as evidenced in Vincent Chu’s debut story collection, Like a Champion (7.13 Books), so are the angels. Many of the protagonists in Chu’s stories of quotidian American life are average joes, often marked by some strain of loneliness that has become commonplace in our modern society these days. And for that reason, it is quite easy for the reader to connect 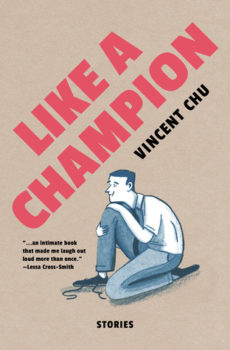 with these underdogs, willfully engaging with their sometimes-quixotic visions of a better life. But underneath it all, there’s often a larger statement being made about the role of self in a changing world.

Some of the stories take place in well-known California cities, but one of the subtle joys of this collection is Chu’s willingness to allow the reader to set the location of each tale wherever they might desire. There’s a well-roundedness to each of these stories that opens up the world and invites us to participate in the everyday issues that arise. There is no need for car chases here or violent murders compounded by a seedy love triangle; the grounded realism of Chu’s plots offer a charming collection that will entice the reader to give their forlorn-looking neighbor or co-worker a second thought, as well as forcing them to take a closer look at their own lives.

The book opens with a delightful piece titled “Fred from Finance.” The reader is immediately introduced to a mild-mannered corporate worker, and Chu wastes no time in in giving us the lowdown on Fred’s predicament:

Fred wanted to be more likeable in the office. That was something they never told you growing up. That being likeable was a hell of a lot more valuable for your future than math or history. Maybe it couldn’t be learned in school. Oh, that would be a shame, thought Fred. Maybe humans were born likeable or not. Maybe at Pear Tree Industries and corporations all around the world, employees were naturally divided into haves and have nots. Have likeability. Have not.

Chu’s writing is straightforward and matter-of-fact, with a clean prose that lends itself perfectly to the tone and rhythm of his stories. If he had tried to complicate it with lofty language and heavy-handed elements of poetic diversion, the simple beauty of these tales would be lost. Instead, he opts to match the writing with the spirit of his quiet characters. And yet this tactic in no way shorts the reader of anything; instead, it heightens the engagement, giving each character a quick outline and a set of problems that the reader instantly connects to. Fred, like many of us, wants to be more likeable. And also, like many of us, he’s going through a rather rough patch in his life: he’s been laid off from his job (on his birthday no less), he’s realizing just how unpopular he is, and he just can’t seem to make those crucial connections with his fellow man that come so easily for others.

It would be remarkably easy for Chu to have taken this story down a much darker path, yet he opts for the bright side with Fred, as he does with many of his main characters, to do us one better. This isn’t to say that Fred suddenly becomes instantly likeable and all ends well, but over the course of this story, the reader goes along a psychological adventure in the life of a lonely man and in the end, it is obvious that there are other forces at play in Chu’s universe—forces that also affect the real world around us.

“Like a Norwegian” showcases Chu’s talents with humor, as well as giving his lowly protagonist another emotional dimension. This time around, the reader is presented with a bitter, often crude character named Mr. Potts. Written in a sequential daily sequence over the course of an eight-day cruise, we follow the at-first detestable Mr. Potts, who is quick to insult others for a cheap laugh while also being highly judgmental of his fellow passengers. It doesn’t take long for the reader to realize what is happening here: Mr. Potts is a lonely man. Chu has taken his archetypal underdog and given him a splendid twist, and by story’s end, the author’s charismatic universe has also worked its magic on Mr. Potts, and the laughs we felt guilty partaking in throughout the story now feel well-earned. 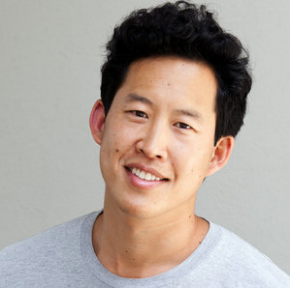 Chu also explores a bit with form in the highly affecting piece “Recent Conversations.” Written as a series of messages inside an online dating app, the story gives the reader an incredibly intimate view of just how confounding, strange, and amusing these ambiguous conversations can truly be. The added layer of detail within this story lends it an authenticity that elevates the prose to something special, though. And, in typical Chu fashion, that realism pays off when the cosmic elements reward his characters (and us) with a deeper meaning in the story’s resolution.

The titular story is one of the collection’s best. With it, Chu rounds up all of the themes within the book and presents them in the form of Georgie, a loveable dark horse of a character who faces the unrelenting challenges of a changing economy, as well as the good-natured hope of finding love in this often-loveless world. Though each of the stories in this collection tackle these themes quite well, Chu gives “Like a Champion” some heft in its urgency and layers the plot with additional complexity that takes time to resolve. Because of this, when we do cross the finish line alongside Georgie, the reward is even sweeter than expected and we’ve connected with this character in a fashion that is insularly wonderful in its own way. Chu injects some big hearts into many of his characters, but Georgie is one that will stick with you, especially upon the backdrop of an uncertain future here in 2018.

By the end of the collection, one word was stamped into my mind as a bold headline through this reading experience: empathy. Chu’s greatest accomplishment through his stories of clean, well-lighted spaces is his gift for telegraphing a message of understanding, of giving the benefit of the doubt, and above all, of respecting those around us. Because after all, are we not all suffering in our own private ways? Do we not often hurt one another and cast judgements to feel better about ourselves? In an increasingly somber world, Chu’s collection of understated heroes is a breath of fresh air that provide an empathic sense of much-needed revelation. We as readers know each of Chu’s characters—they are our co-workers, our store clerks, our online dating interests, and our fellow passengers on this weird life cruise. You’d be hard-pressed to read Like a Champion and not feel some level of compassion for your fellow man (or woman), and in the end, is there a better mark of a successful work of fiction?