Miracle Boy and Other Stories, by Pinckney Benedict

Shawn Mitchell gets under the hood of Pinckney Benedict's Miracle Boy and Other Stories to see how the author manages to pack an apocalypse into each story. In his newest book, Benedict revisits his Appalachian heritage and peoples it with mythological bulls, dogs, mudmen, and robots. 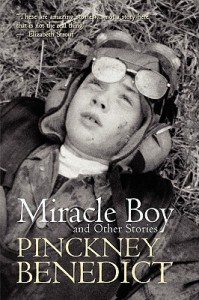 Before entering a workshop, you’ve either read the teacher’s work or you haven’t. Among my friends in creative writing programs, this is usually a conscious, if superstitious, decision. I am guilty of this: I read a few stories by Pinckney Benedict for research before applying to the MFA program at Southern Illinois University in Carbondale, but I didn’t read his work directly before or during our workshop last spring. I was irrationally afraid to let it influence how I took his feedback and advice. I wanted to take what he said and apply it to my own fiction, rather than think about how it tied to his.

Benedict was an intense presence in workshop: enlightening, entertaining; at times heartfelt and encouraging, at others harsh in a way that could have seemed dismissive if the harshness didn’t seem to come from experience and a sincere wish to not see his own and others’ mistakes repeated. Imagine Gordon Lish with a pair of revolvers blasting away as he straddles a rocket careening toward Mars. This is why I was nervous when picking up his latest collection, Miracle Boy and Other Stories. What if I didn’t like it and that cheapened the advice, admonishment, and encouragement I’d received? What if I loved it and could never again dismiss his comments like the occasionally obnoxious man-child and frequently egotistical fiction writer that I am? 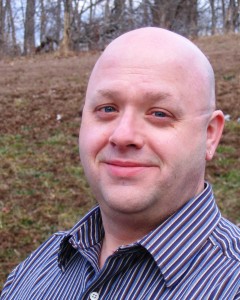 This thought process is the sort of thing that neurotic creative writing students are great at wasting their time on. I shouldn’t have worried. As Elizabeth Strout says in her cover blurb: there’s “not a story here that is not the real thing.” Benedict is the author of two previous collections of short stories (Town Smokes and Wrecking Yard) and a novel (Dogs of God). He grew up in the mountains of southern West Virginia, and his fiction has always mined that region and the writing of those who have worked the Appalachian vein before him, such as Breece D’J Pancake. This latest collection continues in that tradition, filtering universal myth through the regional zone for profound results. The stories therein floor, move, shock, awe, amuse, and amaze. They contain revelation and redemption, hellfire and hail, strange happenings and mythological beasts. They’re Raymond Carver hopped up on Borges, Tobias Wolff strung out on Lovecraft, Chris Offutt drunk on Poe. There’s an apocalypse in every box.

Part of what makes these stories land so hard is the heavy presence of religion and mythology. In her essay “The Nature and Aim of Fiction,” from the oft-lauded Mystery and Manners, Flannery O’Connor says the fiction writer needs to develop a sense of a higher order of things beyond the literal:

The kind of vision the fiction writer needs to have, or to develop, in order to increase the meaning of his story is called the anagogical vision, and that is the kind of vision that is able to see different levels of reality in one image or one situation. The medieval commentators on Scripture found three kinds of meaning in the literal level of the sacred text: one they called allegorical, in which one fact pointed to another; one they called tropological, or moral, which had to do with what should be done; and one they called anagogical, which had to do with the Divine life and our participation in it. […] I think it is this enlarged view of the human scene that the fiction writer has to cultivate if he is ever going to write stories that have a chance of becoming a permanent part of our literature.

This advice applies to all fiction, regardless of faith. Call the anagogical sense a feeling of divine order or call it “exploring what it means to be human,” but the truth is that our best stories typically operate on both literal and spiritual levels. 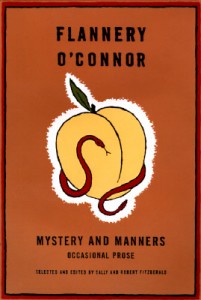 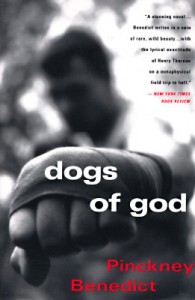 Benedict’s stories follow O’Connor’s maxim: they operate on two planes and in four dimensions. There’s no shortage of Jesus here; in fact, characters frequently find themselves looking up at his image mounted on a wall. As such, Benedict’s work has occasionally been viewed through a limited lens. It’s easy to label something Southern and Christian and safely ghettoize it. Say “The Faithful walk among us!” and the largely atheistic or agnostic academic world screams, “Run!”  During Short Story Month 2010 over at the Emerging Writers Network, there was some back and forth regarding the overt Christianity in Pinckney’s work. The sixteen-penny nails in the title story were interpreted by one commenter as being related in some mysterious way to Jesus on the cross. There might be some truth in this. Like O’Connor, Benedict runs his characters through the spiritual wringer, putting them through crises that test their mettle; they’re given a chance at redemption but they often flub it up.

Christianity isn’t the only thing at play here, though. These stories draw on mythologies from popular culture and other religions just as much, if not more so. They are mythological in a broad and globalized way: Jesus lives right next to mythological bulls, horrific mudmen, ancient and ever-running feral dogs, and pulp sci-fi robots. Things that might ordinarily be considered fodder for “genre” literature are treated reverently here. In “Zog 19: A Scientific Romance,” the story of an alien sent to Earth on an unknown mission becomes the story of a son’s grief over his father’s death. The anagogical sense, in this case, is more that of Humanism, of a willingness to portray a character’s plight honestly, even if that character is an alien masquerading as a man. In some of these stories the anagogical sense is implicitly felt, while at other times it is explicitly stated. In “Mudman,” for example, there is a bull locked up in the barn and ramming the walls. Something, some gadfly or another, is irritating it, like the truth nagging at the corners of the main character’s consciousness. The bull seems related to a sense of restrained and troubled masculinity, and in its majestic stature it brings to mind Zeus, who often took the form of a bull when he visited humans (read: “when he came to Earth to violate women”). In a story like “The Angels Trumpet,” however, this connection to the mythological and historical sense of things is made explicit. We are given long passages explaining domesticated cattle’s long fall from grace, from uris to aurochs to penned-up milk cows. Domestication and its fallout are recurring themes here: no matter how much we repress, suppress, and tame, the mystical and primal reemerge in catastrophic ways. With names like “Lizard” and “Miracle Boy” and “Vandal Boucher,” Benedict’s characters sound like something out of O’Connor’s stories, too. “The Misfit,” anyone?  “Manley Pointer?” But while O’Connor can sometimes feel dismissive and judgmental of her lowly, not-Catholic-enough characters, Benedict never falls into this trap. All the characters here, no matter how “educated,” are as smart as we, the readers and writers, are. They are lost and searching, driven by subterranean motives. Everyone―men, women, children, and animals―has a job or a role; everyone has dreams and nightmares. Take, for example, Snedgar’s reflections in “Mudman”:

The mudman wasn’t moving because it had nothing to do. Snegdar knew that, without the constant nagging of the work, without the terror that something had been left undone, he himself would lie down and never arise again.

Benedict has allowed Snedgar the dignity of the intellect and imagination necessary to understand his lot in life. He might be largely doomed and in denial about his wife’s actions, but he is not a dummy set up to be viewed from a safe distance as he learns his lesson.

If this is all starting to sound a little depressing, you should know that the collection is not all death and doom and despair. Benedict has previously discussed the place of apocalypse in fiction in “Vignette VS Story: The Apocalyptic Arc” over at Red Room.  He defined it as:

…a revelation (the literal meaning of the word apocalypse; a “lifting of the veil”), and a very specific type of revelation: the destruction of an old order, followed by a time (however brief, even a moment, a flicker) of disorder and chaos, and the replacement of the old order by a new and entirely different order (though that new order may in its external details greatly resemble the old).

His definition leaves room for the subjectively “positive” and “negative.” A revelation isn’t always destructively devastating. Sometimes it can be constructively devastating. Likewise, this collection can sometimes be playful and even, well, happy. The title story itself follows a morally redemptive path and at the end, the world seems a little more correct. 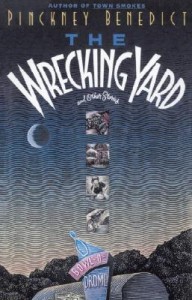 Defining the apocalypse in its original sense as a “revelation” gives the reader another clue as to how to understand how Benedict’s fictions function as well. Again and again the narratives move in dreamlike, circular patterns as they careen toward mind-altering visions, such as when Pig Helmet goes to see the Wall of Life in the aptly titled “Pig Helmet & the Wall of Life,” a story which blurs back and forth between back story and present before wrapping up with a Borgesian vision of infinity:

What lies before Pig Helmet’s eyes is likewise a door, a hard entrance, a long narrow tunnel of infinite length. Pig Helmet thrusts his killing hand, his unbaptized hand, out toward the girl. She is far away and getting farther, but she extends her hand toward him as well, and her lips shape his true name. If Pig Helmet is strong enough, if he strains far enough, if the motorcycles spin fast enough, and if he keeps stretching out his unclean hand forever, he will reach her.

One of the things Benedict advocates for in workshop is that we as writers develop “Shamanisma,” the mysterious X factor that gives a writer the power to grab a reader’s attention and not let go, to convince them of the untrue and to move them thoroughly while doing so. This is not entirely unrelated to O’Connor’s “anagogical sense,” either, in that it requires the writer to believe in his fiction fully, to see it on all levels. It’s impossible to be objective when approaching the work of your teacher, but Pinckney Benedict has Shamanisma. Aside from the fully developed world and characters in each story, the prose here is so well crafted that it’s hard to slow down and question the reality of the story. As Updike said of Nabokov, Benedict “writes prose the only way it should be written: ecstatically.” Benedict’s ecstatic playfulness is palpable in his work. He guides us through “surreal” story after “realistic” story after “genre” story, always pushing toward that satisfyingly inevitable apocalypse. A visual representation of Shamanisma?