Life in Russia, said author Aleksander Snegirev, at Housing Works’ September 21 Rasskazy event, is uncomfortable, but always interesting. So, too, are the stories in this plump new anthology from Tin House: Arkady Babchenko’s beleaguered soldier returns to Chechnya a page away from German Sadulaev’s lyrical descriptions of Chechnya's devastated countryside. The binding is a veritable trench across which both narrators peek at each other warily. 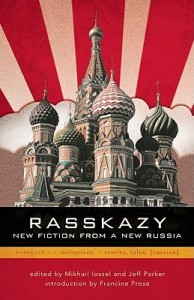 So, too, are the stories in this plump new anthology: Arkady Babchenko’s beleaguered soldier returns to Chechnya a page away from German Sadulaev’s lyrical descriptions of Chechnya’s devastated countryside. The binding is a veritable trench, across which both narrators peek at each other warily.

A less tangible illness-at-ease pervades the stories of Rasskazy: New Fiction from a New Russia (Tin House, 2009), and it does so in a fashion atypical of characters firmly rooted in their homeland. We expect this discomfort in immigrant characters—their awkwardness, their failed mimicry of the natives’ dress and habits, their attempts to pass the time or get laid. The poignancy and entertainment value of the immigrants’ shortcomings are, in part, derived from the fact that we know where to point the finger: things are not happening for this character because his clothes are all wrong and his English is terrible. But what to make of a baseline discomfort within the boundaries of one’s own country?

A post-Soviet antiseptic wafts into these stories just a bit too far upwind to identify. Editors Mikhail Iossel and Jeff Parker, also employ the olfactory metaphor: they explain that the writers in this volume are too young to remember much of Soviet rule, but some vestigial memories return to them like “air they’ve never breathed before.” They are no strangers to bureaucracy: a portly passport clerk takes tea breaks in front of a swollen line; Soviet-era clerical errors leave two Chechen villages named after the wrong river; and an obsessive-compulsive young boy creates his own system of rules governing his footfalls on the sidewalk and the bric-a-brac in his home. In the latter, bureaucracy and its highly variable rewards system reaches its most profound fulfillment: regimentation is literally bred in the bone, organic.

Relationships seem unattainable, but the ones we do see aren’t particularly desirable. Most people are locked away in their own apartment units, nursing their quirks. Permutations of fundamental twitchiness of self, the inability to get find a cool spot on the pillow, to keep from fidgeting, recur in the narrative voices. For “It All Depends on Who You Believe,” Maria Boteva employs barely punctuated run-ons with all the hedges and afterthoughts of a one-sided phone conversation; in this process of extracting the story from the narrator, one is tempted to hang up. Equally challenging is Ekaterina Taratura’s “Seventh Toast to Snails,” a numbered series of fifty vignettes wherein characters of narrator and listener are suggested but never defined. We are frustrated, but never bored, in our efforts to mold what we are given into the familiar Freytag’s pyramid. Our precarious position as readers is similar to that of a novice at a modern art gallery: we’re not sure what we’re looking at, but we don’t want to be the last to get it.

In any collection, there is a natural tendency to seek the common thread through which the disparate pieces are united. We think we know something about Russia—whether it be from grainy films, an undergraduate affair with Dostoevsky, or a leggy Muscovite ex-padruga—and we are looking for confirmation of whatever we have glimpsed. With a territory so large you have to turn the globe twice to see all of it, it’s silly to think that we’ll close the book having learned anything fundamental about Russia or Russianness. If we collected twenty-two stories from all over America, would we expect them to say something cohesive about “our people”? 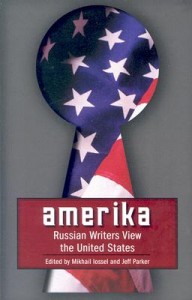 Another anthology from the same editors (Dalkey Archive Press)

And yet it’s in the nature of the onlooker to see “culture” everywhere but at home, and to expect the Other to act the part: we’re glad when characters eat pelmeni or ride the Trans-Siberian, because they’re acting Russian. Let them have their ennui, their isolation, whatever, as long as they show us a few steps in their cultural dance. It’s hard to read a narrative inflected with Russian—or Serbo-Croatian, or Vietnamese—without reading it as unduly varnished in ethnicity. Too often, from an Anglophone reader’s perspective, anything not written in English and taking place in the West is about ethnicity, rather than incidentally located within. We respond to the thrill of a nation laid to extravagant waste, or a people plagued with fervent, destructive sadness.

But, like any fetish, the specifics are only an entry point to substance, not a prerequisite: Russophilia, whether ancestral or assumed, is just one vehicle for the discussions of the self and its messy intersections. 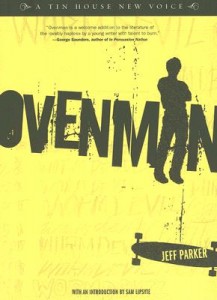 – Hear Rasskazy‘s editors’ thoughts on the anthology–and contemporary Russian literature–in this interview with both Parker and Iossel at Bomblog, and in this Q&A with Parker in The Afterword.

– Find out more about Jeff Parker’s novel, Ovenman (Tin House), and his story collection, The Back of the Line (DECODE).

– If you’re shopping for any of these titles, click here to buy from your local indie bookseller.