In her thoughtful, entertaining new collection, Signs and Wonders, Alix Ohlin lures readers into what seem like lulls, and then, there it is: a car crash. A coma. A missing child. A man licking a woman's leg. 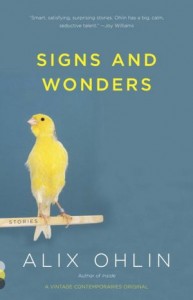 In her new collection, Signs and Wonders (Vintage), Ohlin (The Missing Person, Babylon and Other Stories) puts her poor people through the wringer, then takes a wrung-out person and puts him under a flattened-human-sized slide for an intense, revelatory microscopic examination. Then she peels off this pancaked person and twists him like toffee, extracting every last drop of his essence onto the page.

There’s chaos in these sixteen stories, but usually not right away. Ohlin fools you into a lull, and then there it is: a car crash.  A coma. A missing child. A man licking a woman’s leg. This is just one of Ohlin’s many talents, this pervasive calmness she exudes no matter how awful the situation is turning out. It’s really sort of a strange magic: yes, it’s her measured, assured prose that’s the potion, but there’s something else at work here, her choice of what to leave out. Take “The Teacher,” for example. In this story, we meet Doug and Carol, newlyweds returning from their honeymoon. Carol’s best friend Debbie has picked them up from the airport, and on the way back, their SUV flips. Here’s the next paragraph:

In the hospital he woke up alone, and that was the scariest thing. There was only the sound of machines beeping, not a single voice.

That’s it! And amazingly, that’s all we need to know about what happened. Lesser writers would have sunk their typewriter teeth into the bloody meat of the accident, but Ohlin eschews the obvious. In the next paragraph, before the story turns into something else entirely (let’s just say it involves a hooker with, instead of a heart of gold, just a regular, painful human heart), we have this simple, brutal line: “They waited until he was out of the hospital to have the funeral, again at St. Anthony’s.” (Especially brutal because this is where they got married.) After the crash, there’s not even a single mention of his wife, but we know, don’t we? We know who’s dead, and there’s no quicker route to this tragic fact but to say nothing at all about Carol. This is careful, brilliant writing. 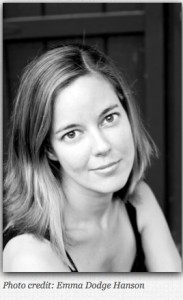 If “The Teacher” is my favorite son in this entrancing collection, then “Vigo Park” is my favorite bastard son (sorry, but I’ve seen too many episodes of Game of Thrones lately). It is the most experimental piece, a fearless, fierce story told by an omniscient narrator on steroids. Just take a look at the way it begins:

There’s a gun at the beginning of this story, placed here so that you know it’s going to go off by the end. That’s just the way it is; you’ve been warned.

We’ve been warned, all right. This entire collection is a warning: My name is Alix Ohlin. I’m going to tell you some stories. And you’re going to listen.

And because Signs and Wonders is a highly entertaining, highly thoughtful work, we will. Since short story collections are tough sells, Knopf is coupling it with Ohlin’s novel, Inside, publishing both books at the same time. Graywolf Press paired off J. Robert Lennon’s Pieces for the Left Hand and Castle the same way a few years ago, and it ended up garnering a wonderful (and totally deserving—both books are super-duper) full-page review in The New York Times; I hope the same sort of attention will be paid to Ohlin’s books.