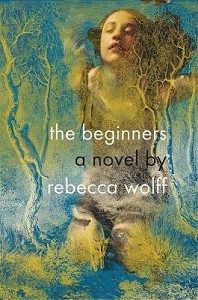 In poet Rebecca Wolff‘s first novel, The Beginners (Riverhead, 2011), Ginger Pritt is a bookish fifteen-year-old stuck in the small New England town of Wick. Not yet over the death of older brother Jack, her parents have become withdrawn and disinterested in their daughter’s life. At two years her senior, Ginger’s best friend Cherry increasingly prefers the company of boys.

Enter the Motherwells. Theo and Raquel are a smart and worldly young couple, the newest and most stimulating presence in this sleepy town. In their home, Ginger is treated like an adult, allowed to partake of their wine and their grown-up conversations on sex and mortality. To the chagrin of their parents and the puzzlement of everyone else, Ginger and Cherry spend all their spare time with the couple. But there’s more to the Motherwells than meets the eye. Ginger uncovers some cryptic details of their background—how they met and why they neither work nor want for money. It seems their reasons for settling in Wick are wrapped up in the town’s own secrets, and lead all the way back to the Salem witch trials.

As the story proceeds, a series of lines are crossed. Theo’s interest in Ginger turns from friendship to something more dubious. Cherry has a change of heart and severs ties with the Motherwells. The unlikely threesome of Ginger, Raquel, and Theo breach the town’s taboo spaces: the locked-up old mill, the male-only Social Club, and the reservoir—where the ruins of another town lurk somewhere below the surface. At the novel’s apex, Wick’s norms prevail violently upon the Motherwells, and Ginger is reduced to the innocent and impressionable young girl the town still wants her to be—a victim rather than an accomplice. 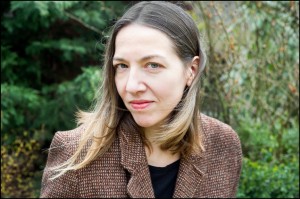 The plot of this book plays second fiddle only to its atmosphere. A master of mood and tone, Wolff is able to conjure up a wicked cross of fear and intrigue upon every page. The term ‘gothic’ is thrown around with abandon when it comes to contemporary fiction, but this novel adheres to some of the key elements of that genre, as practiced by the likes of Horace Walpole or Ann Radcliffe: a blending of horror with romance, a fascination with cryptic architecture, and the pervasive charm of magnetic outcasts.

Wolff manages to get her hands around some of the slipperiest aspects of the adolescent experience. She makes real Ginger’s dreamy escapes into books, her burgeoning sexuality, her infatuation for the Motherwells, and her subtle superiority towards other adults in her life. Ginger’s intelligent first-person narration splices the limbo between childhood and maturity. It is a rare and refreshing thing: a novel that takes teenagers seriously, that reminds us of how surreal our world appears to fifteen-year-old eyes.

Her prose style is also rare: a formidable lyricism that understands restraint. The music of Wolff’s sentences does not recall jazz so much as an old-time Appalachian folk ballad—full of sex and ghosts, mixing caution and temptation, obsessed with origins but somehow timeless, with the haunting images and lonesome sounds that hint at something sinister lurking beneath America’s bucolic surfaces.