The Groom to Have Been, by Saher Alam

In her ambitious first novel, Saher Alam uses the conflicted feelings of the groom, Nasr, for Jameela (his long-time friend) and Farath (his beautiful intended) —a triangle conscious of its debt to The Age of Innocence—to paint a nuanced picture of Muslim communities in North America. 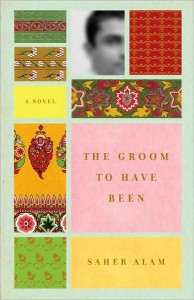 If you walk into any Borders or Barnes and Noble, you’ll see one: a big display stand filled with arresting images of Central and South Asia. Women in hajibs and burqas; bombed out buildings set against serene mountains; plates of “ethnic” food—dhal and mustard greens, hummus and naan. If you bought Three Cups of Tea, you’ll love A Thousand Splendid Suns and Kabul Beauty School. Edward Said, eat your heart out.

At first glance, Saher Alam’s first novel, The Groom to Have Been (Spiegel & Grau, 2008), seems to be trafficking in similar stanisploitation: the cover is awash in photos of exotic fabric patterns, a mix of pastel and bright colors, and beside them, a blurry photo of a South Asian man’s face. But such marketing is only cover-deep: from page one, the reader can tell Alam is playing a different game.

The groom is Nasr, a successful businessman living in New York who, for the first piece of the novel, splits his time between working in Manhattan and interviewing potential brides. Under duress, Nasr has allowed his mother to arrange his marriage, or what passes for arranging in North America in the 21st century. Nasr travels to Georgia, to Jersey, to Montreal—where his mother and sister still live—but cannot find a candidate that upsets his negative expectations until he meets the beautiful Farah and participates in a strange courting ritual. Enthralled by her beauty, poise, and wit, Nasr proposes. Things become complicated when Jameela, a long-time friend of Nasr and his family, begins to fight for his attention. Things get even more complicated when the events of 9/11 eclipse the celebratory feelings of Nasr and Farah’s engagement, and set the second part of the novel in motion.

Alam uses the story of Nasr and his conflicted feelings for Jameela and Farah—a triangle conscious of its debt to The Age of Innocence—to paint a full and real-seeming picture of Muslim communities in North America. We see the marriage-arrangement process from beginning to end; we tag along as Nasr goes to a New York mosque for iftar, the ceremonial breaking of fast during Ramzaan; we see a chilling and heartbreaking scene in Heathrow airport where an Arab man begs the security guards to allow his wife to pass without removing her burqa; we listen to Indian-Canadians and -Americans debate wedding preparations, the causes and effects of 9/11, whether immigrating to North America was worth the trouble; we note the community members’ waning and waxing commitments to Islam and its principles; we witness the eruption of violence—personal, hate-fueled—into the lives of people Nasr loves.

These shots of the community feel like an honest and nuanced portrait of a group that is difficult to label; many of the characters’ families originate in Lucknow, India, where Alam herself was born, but their relationships to India and Pakistan are as complicated as their relationships to Canada and America, to each other. There are passages that interrogate Islam itself, extol the very real virtues of the religion and community, while not hesitating to damn or describe dangerous and oppressing interpretations of scripture.

This would be enough to make The Groom to Have Been a worthwhile read, giving the pleasures of a sustained session of eavesdropping, the curious joy of a glimpse through a stranger’s window, the joys of the well-written (and ethically sound) stanisploitation book, which are provided here in abundance. But Alam’s ambitions are higher. She references The Age of Innocence throughout—including a scene in Huntington House, with a character named Lillian van der Luyden. And the comparisons to Wharton’s novel transcend plot and set pieces; through Jameela, Alam draws connections to New York’s 19th century upper crust—the stuffiness, the highly ordered manners and expectations, the tendency towards leaving things unsaid—consigning the reader with lingering questions, many of them about class. There are a host of other notable allusions: Farah’s courting ceremony, for one, reminded me of nothing more than Portia’s riddle-caskets from The Merchant of Venice. A close friend of Nasr, after being attacked just outside a mosque in New York City, refuses to tell his story, will not even file a report with the police, a silence that points towards Lucy’s in Coetzee’s Disgrace and asks similar questions about whose stories are valued at this moment in history, by these authorities, this public.

Alam also uses structure to ask slightly uncomfortable questions of the reader. There is a reference to the towers falling on page 1, then again roughly 1/3 of the way through, beginning with the line: The terrible event happened, once, twice, then over and over again… Later in the novel (about 2/3 in), Nasr’s friend is attacked, and the repetition of violence and its intentional placement in the overall structure conspire to give the reader the sense that the ‘terrible event’ is happening again, that the towers are still falling, still claiming innocent lives.

The Groom to Have Been does have some minor faults. The descriptions of family life occasionally feel repetitive, and references to, say, the importance of sleeve-length garments to prim Indian-Canadian families similarly feels overused. People seem to be constantly adjusting their rupattas in ways that convey some wafer-thin emotional nuance. By the third or fourth time this happens, this reader was ready for a bar fight or a sloppy make-out with a stranger.

Also, the cultural details, usually well-deployed, on occasion seem opaque. The reader is expected to know the difference between a shalwar suit and a shalwar kameez, between someone saying “insha’allah” and “masha’allah”, to know who Ghalib, Akhtar and Faiz Almed Faiz are without googling them. These references provide specific joys to the community insider, no doubt, but are returned to frequently enough that the outsider occasionally feels like he or she is experiencing the characters’ emotions through glass.

But these are petty complaints against what is a big, smart, brilliantly written book. The Groom to Have Been is a novel of manners, with all the inherent joys and many—the political and religious issues being two specific ones—not necessarily native to the genre. The writing is quite often breathtaking—in particular during the wedding scenes, at the Huntington House, and in descriptions of the besieged and complicated feelings of an irreligious Muslim man navigating a life alone in New York City. Saher Alam is a talented writer working with material that she cares a great deal about—which, friends, is something to celebrate, cover be damned.

Read an excerpt from The Groom to Have Been, and listen to this “Writers on Writing” podcast featuring interviews with Saher Alam and DT Max (author of The Family That Couldn’t Sleep) here.

And here’s Alam herself writing about the inspiration behind her novel; it began, at least in part, with a crush on Daniel Day Lewis…