The Stone Gods, by Jeanette Winterson

Though not uniquely British, the notion that humans seem fated to eradicate themselves—like moths flinging themselves into the flame of Apocalypse—certainly has a long history in The Isles. British historian and journalist A.J.P. Taylor warns, “Human blunders usually do more to shape history than human wickedness.” H.G. Wells rasps, "Human history becomes more and more a race between education and catastrophe." And Jeanette Winterson has now penned The Stone Gods. 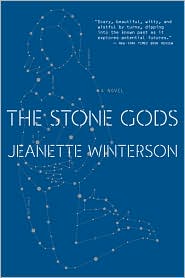 Though not uniquely British, the notion that humans seem fated to eradicate themselves—like moths flinging themselves into the flame of Apocalypse—certainly has a long history in The Isles.  British historian and journalist A.J.P. Taylor warns, “Human blunders usually do more to shape history than human wickedness.” H.G. Wells rasps, “Human history becomes more and more a race between education and catastrophe.” And Jeanette Winterson has now penned The Stone Gods.

It’s no spoiler to confess that Winterson throws her lot in with another famous Brit, Captain Cook himself, who is quoted in the book’s central section: “[mankind] wherever found, Civilized or Savage, cannot keep to any purpose for much length of time, except the purpose of destroying himself.”

Destroy himself mankind certainly does in Winterson’s trinity of thematically linked eco-parables, each of which is comprised of replicated central characters and strikingly similar plots points. Yet despite—or perhaps because of—these overlaps, each represents its own distinct facet of dystopia. Likewise, the book reads more like a novel than, say, a collection of novellas due to the fact that each of the sections inform one another, albeit across huge swathes of history. As a whole, the novel spans a few thousand years, orbiting humanity’s endless search for a second chance. It also grapples with sacrifice, particularly the sacrifices an individual might be prepared to make for both her lover and her ideals.

The first section, set a long, long time ago in an alternate world, pits Billie, the lesbian protagonist, against increasingly hostile government martinets who’ve issued her so many trumped-up parking tickets that she’s about to lose her treasured farm, which serves as a biological “message in a bottle” on the edge of an increasingly over-processed, monopolized society. The farm is Billie’s personal protest against a society’s treatment of their own planet—they’ve “fucked it to death and kicked it when it wouldn’t get up.” 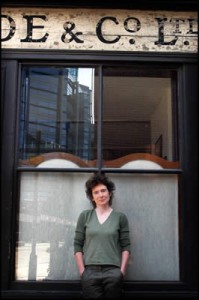 And because of this environmental mess that the pesky humans have made of their home, they need to find a new one. The next best option seems to be Planet Blue, a lush world promising a brave new start. The catch: inhospitable dinosaurs. Sexy Robo Sapien Spike (who will become Billie’s lover) has just conducted a reconnaissance mission there, and now is starting to show curiosity about what it means to be human, and to have feelings. But that’s not really in her programming. And, in fact, she’s slated to have her data extracted and her memory wiped—the Robo Sapien equivalent of death. Her last request: to be interviewed by Billie. Billie is her chance to “be human.” Billie is her chance to love.

And none too soon. Billie herself is under government pressure to be less rebellious, to give up her treasured bio-farm, and to stop causing trouble by being a little too curious and thoughtful and odd. She’s also had her share of difficulties finding the right person to love—it’s hard enough for her just to hang onto her principles. The solution—half planned on the fly and half thrust upon them by the government—involves a return to Planet Blue, carrying Spike along as informant, on a last-ditch rescue effort to save themselves and prep the planet for occupation by getting rid of all those dinosaurs.  En-route, drifting through space, Billie begins to hash out the theory that humanity may just be doomed to repeat itself, burning through entire worlds, loves, and lives, taking second chances for granted. But on the other hand, she muses, “we’re alive, we’re the human race, we have survived wars and terrorism and scarcity and global famine, and we have made it back from the brink, not once but many times. History is not a suicide note — it is a record of our survival.”

This philosophical tension—whether history is a march towards suicide or a record of developmental triumph—plays out as Billie and Spike attempt to weather the harrowing apocalypse they bring to Planet Blue after they touch down in a possibly misguided attempt to force an asteroid to crash into the planet, creating a dust storm to choke the dinosaurs. It all quickly goes awry though, and the planet slides into a dark, deadly ice age.

Hunkered in an ice cave as blood and bionics wind down, Billie marvels, ‘I know that it is impossible to accept one’s own death before it happens, but standing here, it seemed meaningless—not that I should die but that it should matter to me.’ Spike answers, in one their last dialogues:

‘But you’ll hold on to life till the very last second, because life never believes it will end.’
‘Self-delusion, I suppose.’
‘Or perhaps the truth. This is one state—there will be another.’

Reinforcing that theory, different iterations of the Spike/Billie duo crop up several more times in the other sections–once as strained lovers watching horrific forestry practices pit Eastern Islanders against one another, and once more as more pared-down versions of their former selves, inhabiting a future planet sadly lacking Planet Blue’s promise. There doesn’t seem to be a “correct” interpretation of who Billie and Spike really are—merely different versions playing in the same basic story of destruction. There is no core “truth,” in other words, about these characters, more the impression these archetypes symbolize Winterson’s greater concerns (and her lesser concern regarding plot and specifics.)

Part of the book’s delight lies in unraveling the linkages between the three sections, and the way they juggle the philosophical concerns that seem to captivate Winterson. Namely: Is the continuation of life inevitable, or must one cling to the only moments one has? How much can love and personal sacrifice achieve? Are we doomed to be a wasteful, greedy species undermining the ground we live on, or will we take heed in time?

The different iterations of Billie and Spike are like kaleidoscope fragments that let Winterson constantly shift her focus. Each of the three stories overlap a little—some readers will most likely enjoy unraveling the referential threads, though other readers may find themselves feeling as though they are re-reading certain sections. It pays off to watch the details here, though Winterson paints the main concerns with a broad brush.

The main questions at hand seem to be whether or not we continue our consciousnesses past our own destruction, whether we survive ourselves, and if love is perhaps a way of doing so. In other words, nothing less than the main concerns of most weighty literature.

But Winterson has given herself a lot to tackle. The strategy of encapsulating versions of “the same” story in three different sections shows a true Wintersonian love of eschewing conventional story-telling. However, it also runs certain risks. The brevity allows little space for character development, or anything more than clipped, often explanatory dialogue that can seem somewhat wooden. And the plot is so twisted and compressed that it’s forced to rely on coincidences that creak. Perhaps it’s a toss-up, setting the stage for debate on form versus function. 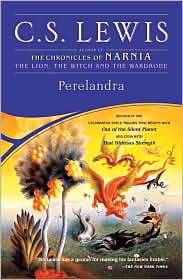 I’m reminded of another Brit, C.S. Lewis, who tackled many of the same themes in his own science fiction trilogy. Parallels arise in the second book, Perelandra, in which the protagonist, Ransom, visits Venus in a sort of recreation of the Eden story. Here, Ransom, as Adam, is coming from an older, corrupted world, trying to explain to Venus’s Eve what death truly means, and what choices lie in front of her: “You could never understand, Lady… in our world not all events are pleasing or welcome. There may be such a thing that you would cut off both your arms and your legs to prevent it happening—and yet it happens with us.”

It is Ransom’s task to stop his rival, another space-traveler, from tempting Venus’s Lady to compromise herself ideologically. When the weight of this duty becomes apparent to Ransom, it also reveals innumerable possibilities—it would be possible, he concludes, for the Garden of Eden to have unspooled a different way, and it is possible for his own story in Venus to play out any number of ways. Repetition is not fore-ordained or fated, in other words. He struggles with this, his rival’s contention:

[That mankind] having now sufficiently corrupted the planet where it arose, must at all costs contrive to seed itself over a larger area: that the vast astronomical distances which are God’s quarantine regulations, must somehow be overcome. This for a start. But beyond this lies the sweet poison of the false infinite—the wild dream that planet after planet, system after system, in the end galaxy after galaxy, can be forced to sustain, every where and for ever, the sort of life which is contained in the loins of our own species—a dream begotten by the hatred of death upon the fear of true immortality, fondled in secret by thousands of ignorant men and hundreds who are not ignorant. 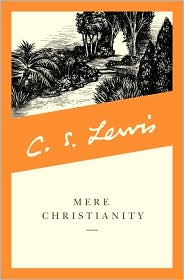 Clearly Lewis and Winterson share more than a few concerns. With Lewis, great, bold, chunky bricks of dialogue do much of the heavy lifting, and the story unfolds slowly, with a wealth of descriptive texture and clarity. By the end of the book, you may not agree with his overtly Christian theology, but you do know his characters. You comprehend what they care about; you witness the vivid reality of their world; you might even say the psychological bedrock that grounds Lewis’s philosophical wrestling matches is firm.

Winterson’s narrative vehicle is less traditional, and her writing more spare. She establishes a rhythmic shorthand that utilizes spurts and repeated poetic phrases as a way of conveying her ideas, and relies on artful language her long-time readers will appreciate. Is this enough?

Of course, science fiction by genre is tasked with the enormous tri-fold duty of entertaining, explaining enormously unfamiliar environments, and perhaps even conveying symbolic or metaphorical meanings that apply to our own environment. It’s no surprise that both Lewis and Winterson struggle at times with their own created realities—Lewis simply renames many familiar things and occasionally sacrifices plot to message; Winterson crafts crisp details, but allows her characters’ emotional arcs to become blunt and overwrought.

Despite the occasional lurid quality, Winterson does carry her narrative through to its logical conclusion. The fact that neither Spike nor Billie can salvage events underscores the seriousness of our own culpability—there is no Bruce Willis or Terminator waiting in the wings, no Will Smith or Neo who will deliver last-minute, microwaved salvation. Not even much chance of spiritual redemption, as in Perelandra.

There is only love, or the echo, or futile longing for love. We, according to Winterson, seem to be in on the wry joke that Spike, in a Spock-like gesture, offers Billie toward the end of the end: 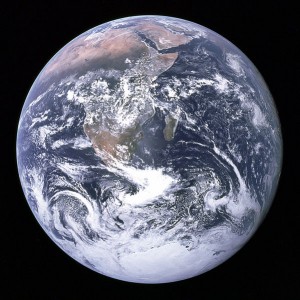 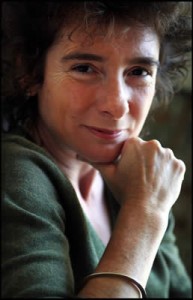 Here is a December 2009 Q&A with Jeanette Winterson from The Guardian.

You can also read a profile of Winterson written by Nicolette Jones for The Independent, published in November of 2009.

Or read Philip Womack’s profile of the author in The Telegraph, which was also published in November 2009.

For a look back at an earlier interview, here is a 1997 conversation from Salon.