"Visitations is all about reckonings. Who are you at your most selfish, Upton asks, at your most desperate, your most monstrous?": Emily Nagin on Lee Upton's latest collection, out now from LSU Press.

Imagine a man walking alone down a country road. It’s somewhere on the cusp of day, and the road is misty. He’s been up all night drinking with friends. I should say it’s 1898 and ghosts are in vogue, so they’ve been reading a horror story aloud to each other. The story is about a governess and a ghost. The ghost may or may not be real. Instead of frightening him, the story has made the man angry. He feels implicated in the governess’s ultimate, tragic fate in a way he’d rather not examine. He knows that horror stories matter, that they scratch at our deepest, rawest selves, but he doesn’t want to admit that he understands this. 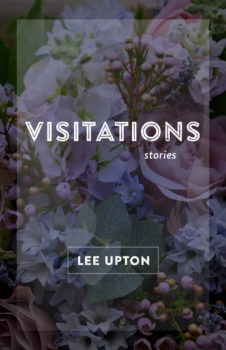 What do you think happens next? By the time I got to this story—appropriately titled “After Turn of the Screw”—in Lee Upton’s newest collection, Visitations (LSU Press), I was equally prepared for the man to meet a ghost on the road or for him to be the ghost. Maybe both! The thing about Upton’s collection is, it constantly messes with your expectations. Part tribute to old-school gothic horror stories by Henry James, Edgar Allen Poe, and J.M. Barrie (you read that right—Upton makes a compelling albeit indirect case for Peter Pan as a horror story), part portrait gallery dedicated to the isolation and absurdity 21st century life, Visitations is all about reckonings. Who are you at your most selfish, Upton asks, at your most desperate, your most monstrous? Do you recognize your life? Do you recognize yourself?

Let’s begin with the tribute stories. As a gothic horror nerd, these were candy for me. “After Turn of the Screw,” in which a man is lured into a classic gothic mansion, is replete with with the trippy, claustrophobic imagery and nightmare logic that makes stories like The Turn of the Screw and The Castle of Otranto—the OG gothic novel—so delightfully weird and disturbing. While the Poe allusions in “The Tell-All Heart” were less satisfying (I can’t get into what they were without spoiling the story), the way Upton writes haunting as an amorphous longing that feels almost like falling in love was softly chilling. “A Shadow,” Upton’s J.M. Barrie homage, was far and away my favorite of her tribute pieces. While Upton is not the first person to point out the sadness and implicit creepiness woven through the Peter Pan story—in Lost Girls, Alan Moore and Melinda Gebbie make the undertones of sexual threat embodied by Captain Hook frighteningly explicit—she captures the deep isolation of being Peter Pan, neither a child nor an adult, in a uniquely sad and disorienting way. “In crowds he scanned faces to find another child like himself,” she writes. “He knew it was past time for him to leave when his loneliness became even more terrible.”

While I enjoyed Upton’s horror shout-outs, Visitations really shines when her stories are allowed to be stories first and foremost, when the references drop away and her characters can just be people trying to function in the face of their own tendencies toward self-sabotage. In “Night Walkers” a book club devolves into a mission to save a widow from her loneliness by accompanying her on midnight walks through the woods. In “Ambrosia,” a woman finds herself the reluctant locus for all of her elderly neighbor’s hopes and regrets. “A Stalker” follows a woman banished to a semi-abandoned tourist town in New Jersey. And in “Hello! I Am Saying Hello Because That Is What I Do When I say Hello!” the narrator, Natalie, works as a hostess at a TGI Fridays-strip club hybrid (think Hooters but worse) and describes herself as a ruin-er.

Visitations really shines when her stories are allowed to be stories first and foremost.

In these stories, Upton’s sense of humor shines through. “It can really make you irritated,” Natalie confesses, “when you see somebody whose life you ruined.” “A Stalker” and “Hello!…” both have a distinctly “Sea Oak”-ian vibe. Another fair comparison would be Bojack Horseman. Like George Saunders and Bojack creator Raphael Bob-Waksberg, Upton pairs her humor with stark emotional honesty. Any confession is accompanied by some absurd activity, including chasing a child’s pet ferret through a bar. I loved these moments for their sheer realness. Isn’t an overt display of sadness or longing even sadder when it happens somewhere slightly embarrassing? Somewhere you wish desperately you didn’t have to be? In “Hello!…,” when Natalie finally breaks down, it happens at work, right next to the stripper pole. In “A Stalker,” Upton writes: “…maybe you have to be ashamed of yourself and humbled before people reveal the hidden parts of themselves, or before you’re capable of seeing those parts.” Upton is hard on her characters, but she is never mean-spirited or ungenerous.

There’s a certain sameness of voice in Upton’s work that can make her narrators hard to distinguish and which can sometimes feel monotonous. But this ubiquitous narrative voice also serves to unite a collection that ranges from pseudo-gothic to literary realism (albeit a slightly exaggerated, absurdist realism). Upton’s voice also throws the links between her stories into relief. Ultimately, every story asks a variation on the same question: What do we believe we are owed? And what do we owe each other? In Visitations, everyone is haunted by some version of his or her most monstrous self, but this haunting isn’t necessarily bad. Visitations suggests that monstrousness is the purest form of honesty, the bravest kind of intimacy. In a world in which we are all staving off loneliness, maybe admitting our worst impulses is the best way to begin saving ourselves.