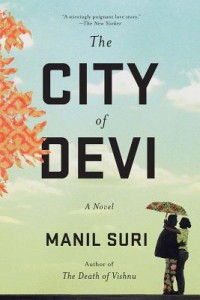 This week’s feature is Manil Suri’s new novel, The City of Devi, which is just out in paperback from W.W. Norton & Company. Manil Suri was born in Bombay (now Mumbai) and is a professor of mathematics and affiliate professor of Asian studies at the University of Maryland, Baltimore County. He is also the author of the novels The Death of Vishnu (2001) and The Age of Shiva (2008), both of which were published by W.W. Norton & Company, as well. His fiction has won several awards and honors and has been translated into twenty-seven languages. He was named by Time Magazine as a “Person to Watch” in 2000.

In the introduction to his recent interview with Manil Suri, Nawaaz Ahmed says of Suri’s trilogy:

As a writer, I’m envious of the range of the prose in these three novels—from the understated to the extravagantly lyrical, from the playful and ironic to the intense and emotional. But what impresses me most is the books’ ambition: they encompass history, mythology, the human heart and its desires, gender and sexuality, politics, and religion.Though not especially long, these are big books. With each novel, Suri seems to be getting ever more ambitious, confronting almost impossible challenges: in The City of Devi, he imagines a post-apocalyptic India in throes of a nuclear attack by Pakistan, a Mumbai riven by Hindu-Muslim clashes, and the appearance of the reigning deity of Mumbai, Devi, as the Bollywood incarnation Super-Devi. There are elephants rides, glow-in-the-dark saris, and even laser fights.

We’re also happy to announce that we’ll be giving away a copy of The City of Devi to three of our randomly selected Twitter followers. To be eligible for this giveaway (and all future ones), simply click over to Twitter and “follow” us (@fictionwriters).