Book of the Week: The Peripatetic Coffin, by Ethan Rutherford 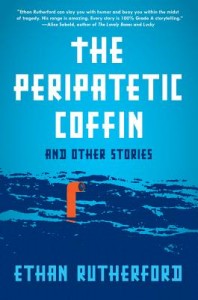 This week’s feature is Ethan Rutherford’s debut collection, The Peripatetic Coffin, which was published earlier this month by Ecco. Ethan Rutherford was born in Seattle, and now lives in the Midwest. His stories have appeared or are forthcoming in Ploughshares, One Story, American Short Fiction, New York Tyrant, Esopus, Five Chapters, and The Best American Short Stories. He received his MFA from the University of Minnesota, and has taught creative writing at Macalester College, the University of Minnesota, and the Loft Literary Center. He is the guitarist for the band Pennyroyal. He is currently at work on a novel set in the Alaskan wilderness.

In the introduction to Rocco Samuele’s recent review of The Peripatetic Coffin, he writes:

Ethan Rutherford’s fine debut collection, is part realism, part satire, part historical reclamation, and part dystopian prophecy. Of the eight stories in this collection, half tread in domestic realism, while half, give or take, are tales of survival. The latter tend to chronicle impossible nautical missions—or the dystopian equivalent—where the central conflict hovers around man versus nature. Thus, we get to watch grown men blunder about. In fact, most of these stories feature men or boys in the act of various degrees of blundering—from the comically absurd to the hopelessly stranded to the stubbornly unaware.

We’re happy to announce that we’ll be giving away a copy of The Peripatetic Coffin to three of our Twitter followers. To be eligible for this giveaway (and all future ones), simply click over to Twitter and “follow” us (@fictionwriters).