I still haven’t read one of her mysteries, but in 2005, Ayelet Waldman had me at hello with her infamous Modern Love essay — the one where she admits – blissfully – to loving her husband even more than her children. (Bonus: said husband is Michael Chabon.) 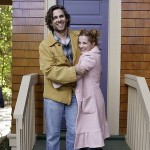 Now Waldman is channeling some of that passion toward electing Barack Obama, who she first met in law school. She’s launched a Books for Barack fundraising drive. In a widely circulated email, Waldman called for writers to donate signed copies of their books, including rare collectibles and first editions, to offer as gifts for Barack donors. Here’s how it works: you donate $250 or more to Barack through her MyBarackObama page, forward your receipt by email to Ayelet, and she and Chabon will send you a signed book from this exciting (and still-growing) collection, as well as a Books for Barack tote bag. More than $140,000 has been raised so far. To that I say, Yes we can!