"Singer burns throughout this story. His fire is what makes the story."

But What About the Fire?

Burning through Adam Haslett’s “Notes to my Biographer”

I’m haunted by fire. Not that kind. The kind that forms the harrowing core of Adam Haslett’s “Notes to my Biographer,” which examines the very large life led by its protagonist, Franklin Caldwell Singer, and the metaphor that comes to consume him.

Singer is loud, tendentious company—and thus an incredibly risky character to anchor this story. But the result is marvelous [or: But the risk more than pays off], even if (or especially because) Haslett’s success requires him to break almost every rule there is about writing stories, starting with “show, don’t tell,” starting with the story’s very first lines. “Two things to get straight from the beginning,” Singer says:

I hate doctors and have never joined a support group in my life. At seventy-three, I’m not about to change. The mental-health establishment can go screw itself on a barren hilltop in the rain before I touch their snake oil or listen to the visionless chatter of men half my age. I have shot Germans in the fields of Normandy, filed twenty-six patents, married three women, survived them all, and am currently the subject of an investigation by the IRS, which has about as much chance of collecting from me as Shylock did of getting his pound of flesh. Bureaucracies have trouble thinking clearly. I, on the other hand, am perfectly lucid.

A week ago, Singer left Baltimore in pursuit of his adult son Graham, the only one of his children who never “bored” him. Graham lives in Venice Beach, California, and hasn’t seen his father for four years, and justifiably fears seeing him now.

And he should, because over the course of sixty-two hundred words, Singer destroys or sabotages almost everything in his path. He steals a car from his niece, orders a $1,200 case of champagne he can’t pay for, terrorizes a fancy restaurant and bamboozles his way into the fanciest room a hotel has on offer, the “Hoover Suite,” which Singer finds “aptly named” “for a man who watched thousands starve and did jack shit about it…. There are baskets of fruit, a stocked refrigerator, a full bar, faux rococo paintings over the beds, overstuffed chairs, and rugs that demand bare feet for the sheer pleasure of the touch.”

This is both delightful and dangerous. Singer is an unreliable narrator who reminds us, at least initially, why authors so often shy away from such narrators: readers are happy to be entranced but hate being conned. And Singer cons one person after another in this piece—the delivery driver with the champagne, the woman who rents him the Hoover Suite, the niece who loans him the Saab she’ll never see again. 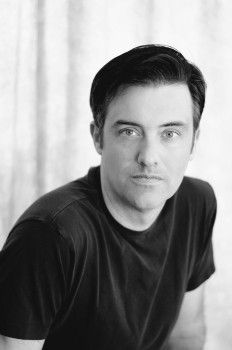 And he cons us, but does so with our full participation, because of a series of crucial decisions on Haslett’s part. First, the prose is never less than intoxicating; we read on because we can’t not. And cleverly, that feeling also helps us feel as Singer’s other listeners must. How does someone like him survive in this world? This is how.

Second, Haslett allows his character to grow larger than life by giving us regular insights into how he is smaller—so much smaller—a man than full, everyday life requires.

And third, Haslett does this by focusing our gaze throughout the story on the act of focusing itself. Sight, light, and what it means to really see something, and be seen for who you really are, are this story’s consuming, fiery passions.

The story’s conceit is contained in its title; these are purportedly Singer’s notes to his biographer. Actually, such is the success of Haslett’s story that I can already hear his character haranguing me: Purportedly? Fair enough. Let’s go back to that opening paragraph and for a close read. Doing so allows us to realize that in just 120 words, we’ve learned almost everything we need to know about Singer, including his age, that he’s a World War II veteran, an inventor, is educated enough to summon examples from Shakespeare, and thinks very, very little of mental health care.

And we also know something else—that he’s absolutely mad, out of control. But thanks to this carefully crafted prose, we know something else: that he—and the author behind him—are entirely in control. Look, for example, at how Haslett handles the rhythm of these sentences. The first sentence, broken off with that colon, is short: “Two things to get straight from the beginning….” After that, the sentences get longer and longer until we get to the 48-word, 5-comma peak of this paragraph, which covers his combat experience, his marital history and his experiences with the IRS. The words spew out in a breathless arc, and entirely by design—we’re to hear quite specifically here the pressured speech of a manic-depressive off his meds. But then Haslett does something startling, even unsettling. He puts the brakes on Singer. The second to last sentence has just five words, no commas: “Bureaucracies have trouble thinking clearly.” And the last sentence has eight words, with two commas, to slow things down even more: “I, on the other hand, am perfectly lucid.”

And he is, if fitfully so. Though he rants on (and on) about a revolutionary new bicycle he’s going to invent, Singer is also astute and alert enough to gives us glimpses of the world getting glimpses of him, glimpses that allow us to both trust Singer—he’s so candid to report this—and mistrust him—the information he’s relaying is increasingly upsetting.

Mortified by his father in one public setting after another, and frustrated that Siner won’t accept the psychiatric care he needs, Graham finally breaks when his dad clumsily asks him what it’s like to be gay:

You want to know what it’s like? [Graham says.] I’ll tell you. It’s worrying all the time that one day [my partner’s] going to leave me. And you want to know why that is? It’s got nothing to do with being gay. It’s because I know Mom left you. I tell you it’s selfish not to take the pills because I know. Because I take them. You understand, Dad? It’s in me too. I don’t want Ben to find me in a parking lot in the middle of the night in my pajamas talking to a stranger like Mom found you. I don’t want him to find me hanged. I used to cast fire from the tips of my fingers some weeks and burn everything in my path and it was all progress and it was all incredibly, incredibly beautiful. And some weeks I couldn’t brush my hair. But I take the pills now, and I haven’t bankrupted us yet, and I don’t want to kill myself just now. I take them and I think of Ben. That’s what it’s like.

Singer’s reply: “But the fire, Graham? What about the fire?” Graham says nothing. “In [Graham’s] eyes,” Singer reports, “there is sadness enough to kill us both.”

What about the fire? It’s the question I return to every time I return to this story. Singer burns throughout this story. His fire is what makes the story. We see that but we also see that this fire, beautiful and creative as it is, is also burning him alive. The horror is that he, finally, sees this, too. Quite specifically, in fact: the closing lines of the piece follow him as he leaves the room where the distraught, spent Graham has collapsed into slumber. Singer gazes out upon the “shimmering” Santa Monica pier which “juts out into the ocean like a burning ship launched into the night.” Nothing less than a Viking funeral will do for a larger-than-life character like Singer; that it’s simultaneously nothing more than an illusion, of a piddly amusement park pier, also befits the man who’s been so steadily reduced throughout the story.