In the end, I don’t have many literary magazines because I give most away. Leaving them at coffee shops and airports, with friends and family, I pay my journals forward, margin notes and all.

My experience with #47 began with its second-to-last-story—a sin the editors must forgive me, for I had not yet learned of the careful strategy with which they assemble every issue’s order. I started there because the story, “Walker, Wallace, Warren” had been written by Matt Bell, and his was the first name I recognized in the issue’s table of contents; I’d been prepping a review of Best of the Web 2010, for which he is Series Editor. 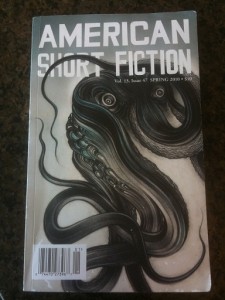 Up to that point, I’d read plenty of Bell’s work—How They Were Found, “Wolf Parts,” “An Index of How Our Family Was Killed”—but the piece he’d submitted to American Short Fiction was something else entirely. Gorgeous, compact, haunting, but most of all: different. Pretty good descriptions for the journal itself, I’d realize two hours later, my first issue behind me.

Top to bottom, #47 serves as a perfect microcosm for everything you might want from a literary journal. The first story comes from Laura van den Berg, an author American Short Fiction’s supportive editors showed no hesitation publishing for a second time. The second, “Shantera,” is about a brick-carrying babysitter. The third is told from the perspective of a giraffe. The fourth, Susan Steinberg’s “Cowboys,” went on to win a Pushcart. The fifth, Matt Bell’s, is only the first half of a one-two punch that ends with Marie-Helene Bertino’s “Carry Me Home, Sisters of Saint Joseph,” a hilarious story you don’t want to stop reading for the way it unearths the secret lives of nuns—for the way, as ASF‘s editor Jill Meyers put it, their “teaching order has a deep, triumphant lust for life—and for Led Zeppelin.” 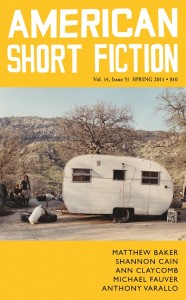 Four issues later, we have arrived at #51, a new spring issue that lives up to big sister’s lofty success. Not only does it boast a debut author—Michael Fauver’s story “Fancier”—it provides us with a story told from the perspective of a reality TV star, Bravo-TV fiction deserving of a bravo itself. And once again saving best for last, the issue ends with Matthew Baker’s “The Wrong Chemicals,” a story that not only echoes Bell’s as haunting and different but may well win awards like Steinberg’s. Equal parts unbalancing and consuming, it is speculative fiction at its best and possibly a thesis for the issue, summed up by Meyers in the Editor’s Note:

Many of the stories in this issue could not have been written ten years ago. And not because they feature iPads or cloud computing or are composed in neat aphorisms of 140 characters. No, it’s neither the technology nor the new forms that make them of the moment—these stories capture the way we live now. Our sensibilities and obsessions. Our drive to share what we know and what we feel with others, even with the world at large—and how this drive can conflict with our need for privacy and deeper intimacy. That spirit began in the early ’90s when Laura Furman founded American Short Fiction at the University of Texas Press. Before closing down in 1998, American Short Fiction was anthologized in Best American Short Stories, the O. Henry Prize Stories, and the Pushcart Prize: Best of the Small Presses anthology. After a temporary step out of the limelight, the journal relaunched in 2006 as an independent literary magazine.

At this point, it’s wise to pass the baton to Associate Editor Callie Collins, who was kind enough to share answers to our “Journal of the Week” questions:

What is the role of American Short Fiction in today’s literary community, be it for readers or writers?

American Short Fiction wants to do many, many things. But mostly we think that our role is to curate—really curate—the best magazine we possibly can. That means we spend a ton of time thinking about each issue, playing around with the order of stories in it, really considering how the stories relate to one another, jump off and settle into one another—all in order to craft a literary magazine that people actually enjoy reading. We mean, a magazine that someone will read by the pool, or on a plane, or out loud to their friends, even if their friends aren’t writers. Supporting our writers is something we consider a huge priority. We want to help propel them to success on as large a level as possible. We pay our authors well and work with them through a rigorous editorial process. We keep up with them and do all we can to support them as they build careers and publish remarkable collections and win all sorts of prizes.

We’re also proud to be in Austin and to be a part of a new, exciting, thriving lit scene. This is our tangible community—the faces we see at our launch parties and the writers that are working at our coffeeshops—and we couldn’t love it more.

We’re excited to observe and to be a part of this shift to digital publishing—and to us, it seems to be making short fiction and lit mags more relevant and successful. Who isn’t drooling over Electric Lit’s app?

ASF’s tastes are constantly evolving, but we’ll always look for stories that take risks with language and with character—stories that explore in a new way what it’s like to be a human being in this same old crazy world. I think digital publishing can help us find these stories, and can help us get them to the people that want to read them. We’re publishing a story a month online right now, and we look forward to having our own fancy app and a Kindle edition of the magazine as soon as possible.

But ASF is always going to be a print magazine. It’s important to us that readers are able to hold this thing that we’ve come together to make, to feel the weight of it. To dog-ear pages or to cuddle with it.

If you could put three items in a time capsule (or USB drive) to be opened in 1,000 years, that would provide a snapshot of American Short Fiction’s aesthetic today, what would they be?

1. The Greenwich Village Bookshop Door. The Ransom Center has in its archive—and is featuring in an upcoming exhibition—a door from Frank Shay’s Village bookstore that was signed by 238 writers, artists, and publishers between the years of 1921 and 1925. This is a strange thing to pick and the time capsule would have to be damn big, but it’s important because the door actively demonstrates a real literary community when everything was exploding… as well as the fierce connection between publishers and writers and readers. ASF’s interior layout was designed to reflect the aesthetic of the wonderful small magazines of this time period. Also, we’re head over heels for the Ransom Center, so this seems appropriate. 2. The giant Post-it notes—I’m talking 2×3 feet—that we use to take notes when we discuss stories at editorial meetings. We can talk about a single story for over an hour, fill up two Post-its, and hang them up in the office while we’re making the final decision. Talking about short fiction is the heart of what we do. Also, having them stuck to the office walls makes us look like crazies, which we enjoy.

3. A bourbon Manhattan from The Tigress or a double Americano in a little cup from Houndstooth Coffee. ASF runs on these two things. Really.

What album is playing on American Short Fiction stereo these days?

The best of Otis Redding. The entire catalogs of Explosions in the Sky and Neko Case. The new Bill Callahan! (He read at our fall launch party last year and our love for him increased exponentially.) Plus, we’re in Texas, so old country music reigns supreme. If I’m reading your story and “Mamas Don’t Let Your Babies Grow Up To Be Cowboys” comes on, you’re golden.

Since this past March, when American Short Fiction celebrated the five-year anniversary of their relaunch, the editors remain busy. Besides publishing the Spring Issue, they’ve also updated their site with a new, site-exclusive story, Jenson Beach’s “Not a Prayer but a Song.” Check back often for more stories and back issue access, and don’t forget to join the follower-ranks on Twitter, which ASF updates with everything you’re hungry for, from lit links to submission reminders.

In the end, I suppose tweets and URLs are a bit easier to share than issue #47. But with #51 firmly on my mantel, I hereby pledge to give away #47 to a random Twitter fan later this week.

Of course, no pressure to pay it forward.

As a special bonus to readers of Fiction Writers Review, we’ll be giving away three free subscriptions to American Short Fiction! If you’d like to be eligible for this week’s drawing (and all future ones), please visit our Twitter page and “follow” us.

Journal of the Week: [PANK]