Journal of the Week: BOMB

At the time, a tribe of Tribeca artists thought their newly minted BOMB magazine would do just that: bomb. Tank. Fail miserably. They had the courage to print an ambitious first run of 1,000 issues but expected to sell just a fraction of them.

Reader reaction was, to their surprise, explosive.

BOMB’s hope for a forum in which artists could speak about their work in the same ways they spoke about it amongst themselves wasn’t just well received, it was rallied behind. For the first time, a journal pinned artists together regardless of pursuit. Writers interviewed painters; poets interviewed musicians. The resulting pieces were long-form, or at least as long as they needed to be for the discourse to accomplish something other journals refused to try or simply couldn’t: to the point, the very drive behind the pursuit—that thing that on the surface supposedly separating artistic crafts, which, after a discussion, inevitably connected them.

Printed in black and white on oversized newspaper stock, the first issue’s 50 pages soon led to BOMB’s incorporation as a 501(c)(3) nonprofit organization. Thirty years later, BOMB has blown up, a worldwide force circulating to 60,000 readers and boasting an editorial board of over 90 contributing editors. The journal also caters to online readers like you, with BOMB’s website, , receiving a million unique viewers annually thanks to rich multimedia offerings including audio podcasts, interactive videos, discussion boards, and more. 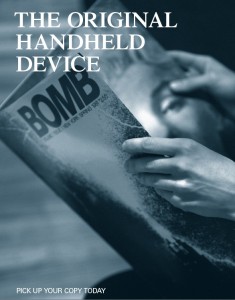 Though BOMB has grown into a full-fledged community, hosting dozens of events, concerts, screenings, contests, readings, and parties every year, at its roots it is still a connector of artists, an incubator for complex discussions and ideas. Just take for example one of my favorite interviews, a 2010 interview with Jennifer Egan—a full year before her recently announced Pulitzer for A Visit From The Goon Squad.

For our readers, Paul W. Morris, BOMB’s General Manager, Digital Strategy, dove considerably deeper into what drives the journal and what will drive it in the decades ahead. Read on for his answers to our Journal of the Week question set:

What is the role of BOMB in today’s literary community, be it for readers or writers?

As an independent magazine, we’re able to pursue work regardless of commercial trends or bestseller status. BOMB is very proactive when it comes to finding emerging talent for our literary supplement, First Proof. In 2007, we published an excerpt from Atmospheric Disturbances by Rivka Galchen, who was recently named as one of The New Yorker’s “20 Under 40” and who is judging BOMB’s annual fiction contest this year. In 2008, we published a short story by Karen Thompson Walker, whose first novel The Age of Miracles was just bought by Random House. In this way, BOMB’s editors really have an uncanny sense for what’s on the verge of breaking, and that’s partly because we now have over 90 contributing editors from across all disciplines who are constantly advising us and making suggestions. We are proud to champion the works of writers who are underrepresented in the U.S., such as Tristan Garcia, Alain Mabanckou, and César Aira, and we are especially sensitive to publishing first-time translations into English. 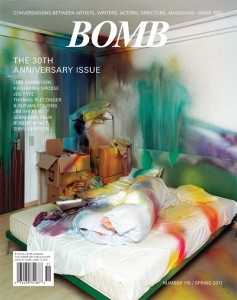 BOMB’s literary interviews provide a forum for writers to talk about their practice with their peers in a way you won’t be able to find anywhere else. For instance, our current 30th Anniversary Issue features an interview with first-time novelist Thomas Pletzinger, conducted by the musician Sufjan Stevens, who was chosen because the author listened to Stevens’ albums incessantly while writing Funeral for a Dog. That’s the kind of role BOMB has always played, carefully pairing writers and artists in conversation based on the relevance of their work to one another.

BOMB offers readers a chance to encounter new writers and new writing, while learning something new about writers they only thought they knew. While for writers, it provides a forum for authors and poets to talk without the filter of journalism. It’s still amazing for me sometimes to look at our hundreds of interviews with writers over the last 30 years, writers who are now firmly established in the canon of contemporary literature, only to realize that way back then they were still in their early careers, or only just emerging.

How do you see BOMB’s mission and tastes evolving in the next two years? Will the rise of digital publishing impact the composition of BOMB?

In many ways, digital publishing is an extension of the same do-it-yourself ethos that was the catalyst for the magazine’s genesis in 1981. We view the challenges presented by it as opportunities to fulfill our mission further. We’re particularly excited about being able to now reach a global audience, since, as a small nonprofit, shipping costs and limited distribution channels were always an obstacle for us in terms of having an international presence. In 2006, we began digitizing all our past interviews and offering premium digital content. At the time, we witnessed an exponential growth in web traffic, as writers and artists, students and scholars flooded the site, hungry for long-form content that had previously only been available in print. Soon afterward, we started BOMBlog with an eye toward adapting the BOMB methodology for web audiences, fueling it with multimedia like the audio series “Fiction for Driving Across America” and our “Phoned-In” poetry podcasts, as well as our BOMBLive! video series.

BOMBlog features are considerably shorter than those in the magazine, but they’re possessed of a similar editorial integrity and methodology as the print. But that’s not to say that we only publish short-form pieces online either. Some of our most popular online features are substantial, intimate web-only interviews. For instance, we just published the first part of a multi-part interview with George Saunders, conducted by a former student who is also a terrific writer, Patrick Dacey. The entire interview came to us at nearly 10,000 words long, but we decided it was too good to cut down for print length, so we’re publishing it in installments (the second part will be published in early May).

Over the next two years you will see increased experimentation with multimedia content, along with the launch of e-books and mobile apps offering both repurposed and premium material. Meanwhile, the curatorial tastes of BOMB are being determined by a new generation of editors, artists, and writers for whom new media is their lingua franca. However, as a 501(c)(3) nonprofit, BOMB will never veer from its original mission, to deliver the voices of artists and writers across multiple platforms. How that mission is applied editorially will depend on the specific medium itself, and will vary from platform to platform as new technologies put more and more power in the hands of independent publishers.

If you could put three items in a time capsule (or USB drive) to be opened in 1,000 years, that would provide a snapshot of BOMB’s aesthetic today, what would they be?

This is an incredibly relevant issue for us right now, as we’re trying to ensure the longevity of both our material archives as well as our digital files. I’d definitely want to include a thumb drive of all the converted audio recordings of BOMB’s interviews, both analog and digital, which total thousands of recording hours. There’s nothing quite like hearing the actual voices of the writers emerge over clatter of silverware on the plates and the various background noise in the cafés and artist studios where these conversations took place. Not to mention the pauses in the conversation that occurred while someone took a drag of a cigarette, the satisfying exhalation of smoke that followed—that aural experience is priceless, impossible to replicate on the printed page, and I like to think that historians in the far future will appreciate hearing these interviews in all their raw, unscripted beauty. 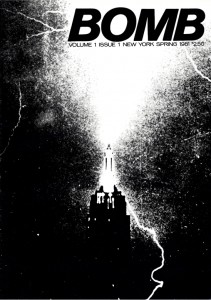 The second item for the capsule would naturally be a copy of the magazine itself. No matter how far we venture into the realm of digital publishing, with all its intangibles, BOMB will first and foremost be a print magazine, an object, something you can pick up and flip through. So we would definitely want to include the one that started it all, BOMB Issue No. 1 from 1981. It’s issues like this that inspired our gifted design team to re-imagine the look of the magazine so that it more closely resembled the ephemeral spirit of the magazine at a time when the founders thought it would not last longer than a few issues. 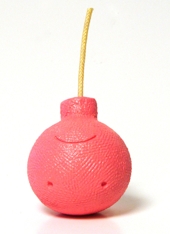 And, finally, just for fun, we’ll toss our magazine’s mascot, “Pink BOMB,” into the capsule, imagining the look of bemusement on historians’ faces when they pick up this bubble-gum pink little fellow looking back at them. Created by sculptor Tom Otterness for BOMB’s anniversary, it features a face that is either happy or unhappy, depending on which way you’re holding it, which is in keeping with the protean nature of writers and artists themselves.

What album is playing on the BOMB stereo these days?

BOMB’s is an office without walls, so editors frequently use headphones to escape the cacophony of production and the fast-paced nature of web posting. I don’t always know what people are listening to, but I know it’s as diverse as the tastes of our staff, who are all artists, poets, musicians, and filmmakers in their spare time. A recent canvassing yielded the following composite, not so much a single album as an eclectic mix-tape, including: any track off the new Explosions in the Sky album, released last week; Trish Keenan’s Mind Bending Motorway Mix; Bill Callahan’s Apocalypse; Merle Haggard’s Down Every Road; The Walkmen’s first album; Alice Coltrane’s Transcendence; Link Wray’s Fatback and Beans. And then there’s these three brilliant singles (each with a corresponding must-see video): Arthur Lee & Love: Live 1970; the Iranian pop stylings of Habib, specificially, “Man Marde Tanhayee Shabaam”; and for something more contemporary, there’s Siriusmo.

Given Sufjan Stevens is a contributor to the 30th Anniversary Issue, we can’t say we’re surprised to see such great music choices gracing BOMB’s headphones. And on the subject of that 30th Anniversary, BOMB has been kind enough to provide a special subscription discount (**50% off!**) to readers of FWR! Simply subscribe online and use the code FWR2011.

In addition to the discounted subscription, readers of FWR have a special extension on BOMB’s fiction contest deadline. Though the contest has officially ended, feel free to submit your stories until Wednesday, May 4th. When submitting, simply mention you heard about the contest via this blog post.

In the meantime, find inspiration for your entry by browsing BOMB’s interview archives and back issues, or by joining their communities on Facebook and Twitter.

As a special bonus to readers of Fiction Writers Review, we’ll be giving away three free subscriptions to BOMB! If you’d like to be eligible for this week’s drawing (and all future ones), please visit our Twitter Page and “follow” us.