Journal of the Week: Gulf Coast

To the uninitiated, a group to which I belong and will forever remain, the literary journal circuit can be a daunting index of titles backed by an even more daunting list of founding universities, non-profits, and artistic heroes—a collage of mastheads and mission statements boasting achievements and honors that, after a while, blend into one giant ecosystem:

Unless you subscribe to and read each one—yes, a brave few have tried—you’ll find yourself relying on friends and fellow readers, anthologies, and posts like these to learn about a particular journal’s taste and aesthetics, its history and goals for the future ahead.

Which is why I’m so excited to talk about Gulf Coast today, and in particular, the story “Pleiades” by Anjali Sachdeva, originally published in the Summer/Fall issue of 2010. The story’s title makes reference to the “Seven Sisters” constellation. A pair of scientists decide to name their septuplets, born after using genetics to overcome the “impossible” odds of such a conception, after the stars. In Sachdeva’s incredible story, the seven sisters die off one by one, a tragic and unexplainable after-effect of the genetic miracle that made them possible in the first place.

In the beginning of the story, however, the children are perfect, each with a matching dark wisp of hair at the front of their foreheads and matching sets of blue eyes turning brown. But that wisp of hair quickly becomes a target for a world that finds them unnatural, picketing against their conception and birth—their very existence.

As I read the story in preparation for this piece, I couldn’t help but connect the kinship of the cloned girls to the literary journal—and larger community of journals—that brought them to life for the rest of us to discover. The outside world doesn’t understand these girls; they don’t see the innocence of Vesta or Leda before one dies of an aneurism and the other of pneumonia. They see “clones,” a term I’ve heard from “uninitiated” friends and family who visit my apartment to discover the journals piled on my bookshelves, the coffee table, the desk, the entertainment center, the little crumb-lined paths between them.

Please understand: the “literary journal” was the lens through which I read “Pleiades,” so when one of the daughters died, I thought of Open City shuttering last month, and when the next passed, I was reminded of Flatmancrooked, which shuttered last week. I thought of all of us in the literary community looking forward, being told to, but never being totally able to shake the feeling that while some of our future is bright and LED-lit, there is still a good portion of it in darkness. That feeling that when one of us falls, all of us do—a feeling the cloned sisters of “Pleiades” know all too well:

That night we all slept piled on the floor of our bedroom, holding on to each other’s wrists and calves and hair, terrified of losing one another. For months after that we felt sick, but we thought it was just sadness. We didn’t know yet that for us there was no such thing as just sadness, that our grief had a life of its own, an invisible mouth like a black hole that drew us inexorably closer.

I think this excerpt does a nice job of illustrating why Dave Eggers, after discovering the story and realizing he’d found “some kind of small masterpiece,” nervously taught the story to one of his 826 classes unsure of how they’d respond; and why, after they’d unanimously come to agree, he told the Washington Post he “went home feeling electric about the possibility of the written word.”

Gulf Coast might as well inscribe Eggers’ sentiment on its inside cover, for “Pleiades” is just one story of so many the journal publishes bi-annually. 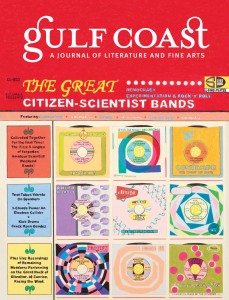 Founded by Donald Barthelme and Phillip Lopate, the journal, currently the pride of the University of Houston’s English Department, began its days as Domestic Crude—a nod to Houston’s major industry during the early-to-mid-eighties, when Lopate was contributing editorial advice for the first few issues.

Since 1986, Gulf Coast has published under the title readers recognize today, and since then, the readership has steadily expanded beyond university walls to become a stalwart in the literary space. In addition to fiction and poetry, the journal is celebrated for its commitment to exploring the visual arts, with every Gulf Coast issue featuring two artists along with short essays on the works from an art director.

Though still student-run, the 501(c)3 nonprofit organization stays busy with the Gulf Coast Reading Series, an annual Spring Release party, and the Gulf Coast CLMP Indie Book Fair, held each April on the grounds of the Menil Collection museum.

Gulf Coast’s works have also found homes in anthologies. In addition to “Pleiades,” which will be collected in Best American Nonrequired Reading, Jill Alexander Essbaum’s “Stays” will be included in Best American Poetry. And if there was a collection for “creepy fables,” Benjamin Percy, whom we interviewed back in September, would be included for his recent tale “The Cold Boy.”

Editor Ian Stansel was gracious enough to answer our Journal of the Week question set over email to help give readers a better idea of Gulf Coast’s role, now and evolving, as well as that eternal question: what’s on the office radio?

What is the role of Gulf Coast in today’s literary community, be it for readers or writers?

We’d like for Gulf Coast to work both locally and globally. On a wide scale, we want to publish writers from all over the U.S. and the world. Our fall 2011 issue will feature a special section with a number of international writers. There are so many great voices out there. We are also often able to feature great work by writers for whom this is their first major publication. And I like being able to tell that writer that her work will be right next to a piece by Sarah Shun-lien Bynum or Benjamin Percy or Phillip Lopate or D.A. Powell.

On a local level, we want to engage with our community, the city of Houston, as much and as often as possible. We hold a monthly reading series, an annual Indie Book Festival, and an annual Spring Issue release event. This year’s event, at the end of April, will feature a reading by Bret Anthony Johnston. All of these events are free and open to the public. The literary/visual/performing arts scene in Houston is pretty amazing and a constant source of inspiration for us. We like to add to the positive energy when and how we can.

How do you see Gulf Coast’s mission and tastes evolving in the next two years? Will the rise of digital publishing impact the composition of Gulf Coast?

Because the Gulf Coast editorial positions change every two years, the aesthetics of the journal are nearly always developing. We do, though, try to hold on to certain ideals from one administration to the next. Having been co-founded by Donald Barthelme, we are always aware of the need for an outlet for more “experimental” work—be it in form, subject matter, voice, etc. We want to be a place for work that might not get considered in more traditionally-minded journals and magazines. That is not to say, though, that we do not love and publish straightforward retrospective narratives; some of my favorite pieces in recent issue have been just that. But we want to balance those wonderful transparent-prose pieces (Roderic Crook’s “Townie” and John Weir’s “Tangled Up in Blue” come to mind) with stories like Melissa Pritchard’s “Watanya Cicilia,” a formally adventurous retelling of the life of Annie Oakley, or the lyrical second-person piece “The Man in the Moon” by Suzanne Grabowski.

As far as digital publishing goes, we plan to introduce a digital version of Gulf Coast this fall. How this will affect subscriptions and the day-to-day life of Gulf Coast we aren’t sure yet. But one of our main goals with this project is to make the journal more easily available to international readers.

If you could put three items in a time capsule (or USB drive) to be opened in 1,000 years, that would provide a snapshot of Gulf Coast’s aesthetic today, what would they be?

I’d put in Megan Mayhew Bergman’s story “Every Vein a Tooth” and Ely Shipley’s essay “On Beards: A Memoir of Passing.” I pick these in part because they are incredibly accomplished pieces and I have not mentioned them yet, but I also think that in tandem they illustrate the sort of aesthetic balance we love to get in an issue. Then I’d toss in/upload the art of Dawolu Jabari Anderson, which we featured in the Summer/Fall 2010 issue. It’s hard not to love his work. And if there was any more room (USBs are pretty big these days) I’d add in a picture of Max and Balou, our resident canine staffers. I think they inspire editorial choices more than I should admit.

What album is playing on the Gulf Coast stereo these days?

As we share a wall with a group of hardworking English Department TAs, we don’t get to crank it up as often or as loud as we’d like, but a quick survey of our small staff tells me that we’ve been enjoying Ingrid Michaelson, Bon Iver, Edward Sharpe, Thelonious Monk, and the new Sufjan Stevens and Destroyer albums. Oh, and every chance we get (again, not often enough) we order cheap pizza and listen to Kanye West.

That combination of pizza and Kanye West is one worth celebrating, and from talking to Ian, it sounds like there is another celebration coming around the bend with the upcoming release of Gulf Coast’s 25th Anniversary Issue, available on newsstands in mid-April.

In addition to the writers above, the issue will include poetry from D.A. Powell, Dorthea Lasky, Andrew Zawacki, Yusuf Komunyakaa, and Valzhyna Mort, as well as nonfiction from Phillip Lopate, Michael Copperman, Josh MacIvor-Anderson, and others. It will also contain a visual art retrospective by twelve artists previously featured by Gulf Coast.

Subscription and submission information, back issues, and much more can be found at the Gulf Coast website. Once you’ve had your fill, head on over to the Gulf Coast Facebook page and hit the “like” button.

After all, something tells us you will.

As a special bonus to readers of Fiction Writers Review, we’ll be giving away three free subscriptions to Gulf Coast! If you’d like to be eligible for this week’s drawing (and all future ones), please visit our Twitter Page and “follow” us.