Does having a history makes an object more valuable? Part writing project, part community art, part economic study, the Significant Objects project intends to find out. The project asks writers to invent a story for a thrift-store object–each costing just a few dollars–and then posts the object on eBay, with the fictional story as its description. 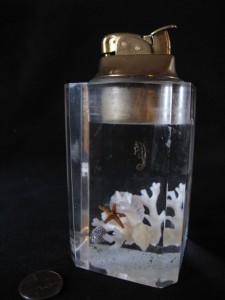 Past contributors have included Aimee Bender on a seahorse cigarette lighter (final price: $36); Colson Whitehead on a wooden mallet ($71), and Matt Klam on a duck-shaped vase ($15.50). Curtis Sittenfeld’s story about a spotted dog figurine–which bears the motto “Glad I Spotted You!” and eventually fetched $17.50–begins thus:

It’s not that I think I married the wrong man. Because really, how can any of us make a decision except as the person we are in a particular moment? I met Larry and Ronald less than two weeks apart, when I was nineteen. After high school, I’d moved into an apartment with a couple girlfriends from St. Agnes Academy, and we all thought we were very sophisticated, living on our own like that; Bernadette used to grow alfalfa sprouts in pantyhose in the tub. This was in ‘68, and I was working as a switchboard operator at a bank downtown. I met Ronald through a girl from work — he was the girl’s cousin — and Larry I met on the bus riding home one day. I was carrying an orchid plant I’d bought for the apartment, and he asked if I considered myself a flower child.

Visit the Significant Objects website for more objects and their stories.

Attention span too short? Significant Objects and Smith Magazine recently ran a six-word story contest, where readers tried to make an object significant using, yup, just 6 words. (It was partly inspired by the apocryphal Hemingway story: “For sale, baby shoes, never worn.”) Read all the entries are here; if you’re the flip-to-the-end-of-the-mystery type, winner and runners-up are here.

The Purpose of Art: An Interview with Elise Blackwell