"It’s a reminder that the way we spend daily life is, ultimately, the life we end up living."

Stories We Love: “A Father’s Story” by Andre Dubus

Any story I consider a favorite stirs up in me feelings of envy and wonder. “A Father’s Story,” by Andre Dubus, has this effect. On the first count, it’s the I-sure-wish-I’d-written-that moment. If you write and if you read, you know this feeling. Think early motivations. Maybe that feeling—we could dress it up and call it admiration, but that seems too mild—led you to write in the first place. Envy being the mother of imitation, maybe, hypothetically, it led you to write a story about a vampire gerbil that sucked fruit white. Gerbacula. Maybe you are very, very sorry about this.

On the second count, wonder; it’s when I stop reading and think, “I didn’t know you could DO that in a story,” or, to a lesser degree, “How did the writer pull that off?” Is literary fiction allowed to be as quick and funny as “You’re Ugly, Too”? How do the fragments in Harlan Ellison’s “The Man Who Rowed Columbus Ashore” remotely add up to a satisfying story? What about the surprising, associative, magical last paragraph in “Bullet in the Brain”? And there is no way a story written in Powerpoint is going to make me feel anything but annoyed, said my inner-skeptic, that idiot. 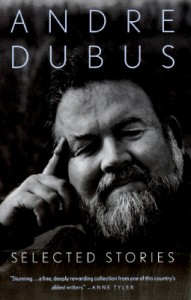 In “A Father’s Story,” there are plenty of how-does-he-pull-this-off elements: the central action is held back for ten of its first twenty pages; the main character talks to God, as in, actual conversations in which God says something back; and, finally, ultimately, it’s a story about faith, of the capital-F sort, and a story about love and devotion and nowhere the slightest whiff of irony.

Luke Ripley lives alone on a horse farm. Long-since divorced, he will never re-marry because doing so would violate his Catholic faith. His life revolves around daily mass, conversations with his priest, and the riding lessons he leads at the stable. His four children are grown, the three boys distant, but his youngest, twenty year-old Jennifer, visits occasionally during the summer. One summer night she comes home late, wakes Luke, and tells him she may have hit a man walking alone on a country road. Luke drives to the accident site and there and afterward, he must decide to what extremes he will go to protect his daughter.

The story works in large part because its first-person narration, the intimacy it generates, and the sympathy that follows during the long build-up to the central action. In the first ten pages, the reader gets back-story and learns of the routines and rituals that define Luke’s life. The reader understands Luke through his rituals. He is a man who wakes early; who prefers detective novels to watching television; who, aside from regular mass and infrequent dinners out, spends much of his time alone. In describing mass, Luke acknowledges the value and necessity of ritual: “For ritual allows those who cannot will themselves out of the secular to perform the spiritual, as dancing allows the tongue-tied man a ceremony of love.” The thread is picked up again, applied to his failed marriage:

Twelve years later I believe ritual would have healed us more quickly than the repetitious talks we had, perhaps even kept us healed. Marriages have lost that, and I wish I had known then what I know now, and we had performed certain acts together every day, no matter how we felt, and perhaps then we could have subordinated feeling to action, for surely that is the essence of love.

With access to the interior spaces of his solitary life, we understand Luke as a man of discipline, a man with a code. Understanding what motivates Luke and why is crucial to the second half of the story, when Luke’s code is tested and he must decide how to react to the possibility that his daughter might have accidentally killed a man.

As the story unfolds, Luke’s relationship to his daughter becomes more complicated, as he draws a distinction between the variety of love he feels for her compared to his sons. He says, “Jennifer is twenty, and I worry about her the way fathers worry about daughters but not sons. I want to know what she’s up to, and at the same time I don’t.” Later, after the accident, Luke considers his actions and what he has done to protect his daughter:

I would do it again. For when she knocked on my door, then called me, she woke what had flowed dormant in my blood since her birth, so that what rose from the bed was not a stable owner or a Catholic or any other Luke Ripley I had lived with for a long time, but the father of a girl.

If this is a triangle story, the third point is not another human but God—a risky choice to be sure. In the hands of a lesser writer, Luke’s relationship to God and his subsequent conversations could read as high-handed, proselytizing, or worse, the literary equivalent of a Hallmark Movie of the Week starring Hummel figurines. Instead the conversations seem a natural outgrowth of Luke’s faith, that faith based in rituals outlined in intimate detail in the first half of the story. Inside these rituals, their sheer unthinking repetition, dwells comfort and a familiarity—daily mass, early mornings watching the birds, Wednesday night dinners with his priest. During these times, Luke is able to free up space for spiritual contemplation and growth. In short, we as readers have access to Luke’s spiritual life—not a generic one, but one with particulars that define him. Subsequently, when Luke’s faith is tested by Jennifer’s car accident, he will fall back on his spiritual life and act, not think—or, more accurately, his actions will reflect his thinking on some deep level, a deep level some might call a soul. Because in a crisis, up to your armpits in a damned-if-you-do, damned-if-you-don’t situation, when logic and emotions aren’t up to the task, what’s left but your soul? In Luke’s case, his is a soul shaped by his Catholic faith and his own very specific definition of what it means to be a father to a daughter. And in the end, he must answer for his soul, for what he does to protect Jennifer, as he speaks with God:

So, He says, you love her more than you love Me.

I love her more than I love truth.

Then you love in weakness, He says.

“A Father’s Story” is sincere, intimate, felt. It’s a reminder that the way we spend daily life is, ultimately, the life we end up living. Our rituals define us, shape our souls. In this way, “A Father’s Story” is a story that matters even more today than when it was published in 1983. Here in the Information Age, if your rituals are anything like mine, they tend toward instant gratification, of privileging speed and access to information over depth and application of knowledge, of valuing the snarky comment over reasoned, thoughtful debate. This screentime, this daily mindless chatter, this funny cat video after funny cat video, what, I sometimes wonder, is this doing to my soul?