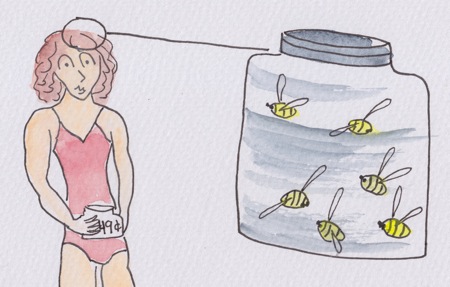 Queenie As Portrayed in A&P, by Sarah Van Arsdale

It just kept nosing its way into my own novel—“A&P” by John Updike. I’d first read it when teaching lit classes years before, and now, as I finished my third novel, my characters kept making references to it: a girl’s mind “just a little buzz like a bee in a glass jar” or the way the boy at the register sees the girls’ bathing suits. Knowing it’s best to let the subconscious have its way while writing fiction, I let the story in, even as I wondered what it was doing there. My novel, Grand Isle, was in print a good two months before I realized—with a whoop of surprise and delight—why the story felt so present in the novel: the Updike story is really about class, about town and gown, and about a young person developing moral mettle. Um, just like my novel.

Updike does the thing I so envy about a brilliant short-story writer: he brings his precisely-focused eye to the singular moment in which the fate of the world turns. It’s like seeing a prism catch the light and fracture it into a full spectrum of colors. The story takes place over the course of about ten minutes, and yet it has stayed with me now for nearly twenty years—and stayed with me so deeply that there it was, having its way with my own novel.