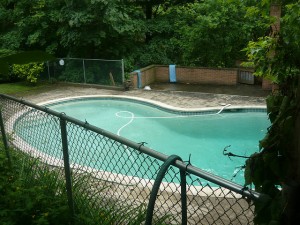 “Dick” is a snorter, a mean cackler, a muffled hooter. It’s a story to read on the subway home from a maddening staff meeting, or on your front steps after a surreal and unpleasant interaction with a neighbor, or to prepare for a holiday with extended family.

Ann Ponders (har har) moves her husband and son from L.A. to Colorado, hoping to leave everything unnerving behind: her snorting, smoking daughter Lizzie, “clever and duplicitous” in “the whole smooth suit of skin she wore without thinking”; her Alzheimer’s-addled mother, now in a nursing home; her young son’s best friend, Dick, who carries the gamy odor of the Rottweilers his parents breed and may have killed their family cat and tossed it in the swimming pool. In Colorado, Ann persuades her family, they can get some “clean air.”

She had insisted, she had cried, she’d shamelessly exploited the national disaster of two Septembers ago to aid her cause….”The important things,” Ann had assured Cole in L.A., “are coming with us.”

“Not Lizzie,” he’d responded. “Not Grandma.”

And not weird, buzz-cut, son-of-republicans Dick, Ann thinks, but when the boy runs away from home and his parents appear on Ann’s Colorado doorstep, desperate, sleepless, and bearing a Rottweiler puppy that Cole immediately names “Dick,” it becomes clear even to Ann that she has lost every battle.

Ann seems to willfully truncate her own insights, at least the ones that could lead to self-reproach. She watches the easy playfulness between her son and daughter and feels a chafing resentment that she disguises as affection:

They had their own intimacy, Ann saw with a tender pang, one completely removed from her or their father. Richard was trying to catch her eye, to let her know that he saw it too, but she wouldn’t look at him. She was training herself to scorn his collusion. But why?

Ann is more like the mother she has left in a nursing home than she realizes: “Shock had unglued her mother, Ann supposed, the perfectly understandable desire to stop knowing any more things.”

Every character in the story is more sympathetic than Ann, which is what makes Ann’s narration—belligerent, miserable, dense with detail, and clouded with confusion—so darkly funny to read, even when the events she recounts are not “funny” at all:

Christmas came tainted. When asked what he wanted, Cole requested going home and meant L.A. He wanted nothing else. Lizzie flew in from California once more without her grandmother. This time, the woman had turned tail when she saw the can at the curb of the nursing home.

“If you want to see her,” Lizzie told her mother nonchalantly, as she reached to switch on the car radio, “you’re going to have to get your ass back to L.A.”

Why wouldn’t that place leave her alone? She had an unkind, inexorable thought: She would be forced to take her son back there if Dick were dead. They would have no choice but to return for a funeral.