"We see in 'Samuel' the ways in which third-person omniscience extends the possibilities for inhabiting character in all directions, for all writers."

"Grace Paley shows us one way in which the heretofore old-fashioned, third-person omniscient perspective might be one of contemporary fiction writers’ greatest tools to elicit empathy for characters."

Authors Note: I wrote this piece in the weeks before our 2016 presidential election, knowing that it would be published this week, and—as the introduction makes clear—the language and landscape of the recent political campaign was one of the elements affecting this essay’s inquiry. However, reading it now in light of this morning’s presidential results, I am reminded even more of how important the work of writers like Grace Paley can be in attempting to bridge our shared experiences as humans.

Grace Paley’s fictional world is informed by a deep understanding of human suffering and the need for social justice. Her story “Samuel,” the subject of the following essay, reminds us how storytelling can resist the marginalization of the most vulnerable among us. To paraphrase the twentieth-century Martinican poet, political activist, and president Aimé Césaire, words are miraculous weapons. Literature and art can serve as powerful political tools, and help us recall our shared humanity even in the darkest of times.

Many of us will recall the brouhaha generated earlier this fall by Lionel Shriver’s keynote speech at the Brisbane Writers’ Festival. While the topic of her speech was listed as “community and belonging,” Shriver’s talk on cultural appropriation and fiction instead aimed, in her own words, to combat the idea that fiction writers should not try to step into the shoes of characters with different ethnic and racial backgrounds from the writer themselves. Her speech was hotly debated in the weeks to come, and often situated alongside the xenophobic and racist rhetoric that continued to emerge from Donald Trump’s presidential campaign.

While I read the articles supporting and refuting Shriver’s speech, I found myself returning again and again to a less sensational essay that appeared in the New York Times a few days before news of Shriver’s speech broke: Elliott Holt’s “The Return of Omniscience.” Holt’s excellent reflection on omniscient perspective in contemporary fiction kept coming back to me as I read the debate about Shriver’s contentions.

Holt makes a compelling argument for the reasons why novelists have returned to third-person omniscience, following a century dominated by close third- and first-person narration. To be clear, Holt is referring specifically to “narrators who intrude to remind the reader how little the characters know. The omniscient narrator is conscious of everything and isn’t afraid to say so.” Her first example is the opening sentences of Celeste Ng’s Everything I Never Told You: “Lydia is dead. But they don’t know this yet.” In the case of Ng’s novel, the subject (a family with an Asian father and white mother) is very close to Ng’s own background. Ng explores each of the family member’s stories, from mother and father to each of the siblings, until we finally enter into Lydia’s perspective to learn why and how she died. In Ng’s case, the omniscient exploration is across generational experience. If the old metaphor for omniscience was “author as God,” Holt argues that contemporary omniscient narration “reflects the sense we all have, as Internet users, of access to unlimited knowledge.” In other words, writers and readers have returned to omniscient narration because it’s part of our daily experience to explore beyond what someone wants to reveal about themselves. To wit: consider the question of whether or not to search for potential paramours met online. For better or for worse, narratives are always revealed in googling. 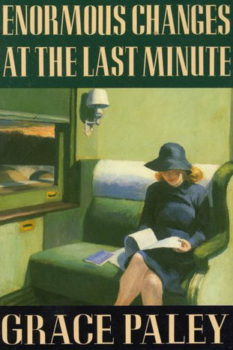 As I reflected on the return of omniscience alongside the debate about fiction and cultural appropriation, I was also reading for my MFA candidacy in the Bennington Writing Seminars with Alice Mattison, in whose new book about writing craft and writing life, The Kite and the String: How to Write with Spontaneity and Control—and Live to Tell the Tale, there is an incisive craft analysis of Grace Paley’s story “A Conversation with my Father.” Mattison’s reading of Paley focuses on narrative authority: how to tell a story and what details are necessary to include in order for a story to be both believable and compelling to—in this case—a particularly tough reader, Paley’s father. Where the tone of Paley’s stories are frequently akin to what you see in “Father”—frank, funny, ironic, and conversational—Paley’s story “Samuel” strikes a different tone: it’s more distant from its characters, almost as if the omniscient narrator is filming the characters through a cell phone camera, with only brief moments of interiority.

And curiously, there is an exploratory premise in “Samuel”: Paley opens with a comment: “Some boys are very tough. They are afraid of nothing.” The first paragraph offers examples of the bravery of boys: from jumping rooftops to exploring cellars (which, for me, can’t help but evoke the dolls-in-the-cellar story that introduce the tough girl protagonists in Elena Ferrante’s My Brilliant Friend). In the final sentence of the opening paragraph, Paley sets the scene for “Samuel”: “They also jiggle and hop on the platform between the locked doors of the subway cars.” The next sentence gives us four boys, “jiggling on a swaying platform.” Here we see the economy of the third-person omniscient: we don’t need to know who the narrator is, or why she is there. All we need to know is that boys aren’t afraid, they jiggle between subway cars, and here are four of them doing just that.

Next Paley introduces the boys by name, Alfred, Calvin, Samuel, and Tom. We then learn that the men and women inside the cars on either side of the platform are watching them, and worrying about them. The omniscient narration also allows us access to the perspectives of two of the men in one of the cars, who remember their own brave adventures as boys: one of them would hop the tops of moving trucks, and even though he almost fell several times, we know he lived to tell about it, as did the other brave boy turned adult man.

The adults worry collectively. The boys are not just boys: “They are little.” The ladies get angry because they are so worried. One of them wants to interfere, we learn as the narrative now dips into her point of view, but she doesn’t because “three of the boys were Negroes and the fourth was something else she couldn’t tell for sure.” Because of this, she surmises, they might be fresh with her if she intervenes. She is not afraid of violence but embarrassment, and I can’t help but recall Claudia Rankine’s section in Citizen: An American Lyric in which the second-person narrator relates a typical public transportation micro-aggression: none of the white passengers sit next to an African-American passenger. In the case of “Samuel,” as we will see, the woman’s decision to not press the boys further in order to protect them has not only unintended but grave consequences.

As the train slows, the boys begin to jerk on the chains they hold to stay upright on the platform. It’s at this point that the woman opens the door to lecture them that they’ll be killed, and she threatens to tell the conductor. The boys laugh, and the lady blushes. This riles the boys further, and they begin pounding each other on the back. Samuel pounds the longest and hardest, and calls his friends babies for holding on to the chains when he has let go. Now we come to my favorite use of the omniscient narration in this story: “One of the men whose boyhood had been more watchful than brave became angry. He stood up straight and looked at the boys for a couple of seconds. Then he walked in a citizenly way to the end of the car, where he pulled the emergency cord.” There is something almost brazen about the way Paley zooms in to learn this unnamed man’s motivations, then zooms out to watch as he makes the fatal decision to pull the emergency brake. And it’s the crucial action in the story, which heightens this move all the more. Once the man pulls the emergency cord, the wheels catch; people are thrust from their seats; all of the boys on the platform were holding onto the chains, except for Samuel, who “pitched only forward and fell head first to be crushed and killed between the cars.”

We leave the scene in a tumult of confusion and tragic aftermath, with the little boys who survived “close to each other, leaning and touching shoulder and arms and legs.” Paley could have ended the story there—but to end there wouldn’t grant Samuel a life fully lived, lost, and grieved. So Paley ends the story where none of the characters heretofore in the story will go, with a police officer delivering the news of his death to his mother, who “screamed all day and moaned all night, although the doctors tried to quiet her with pills.” She is a young woman, and she and Samuel’s father have other children. But the story ends with the gaping hole that Samuel leaves: “never again will a boy exactly like Samuel be known.” Paley doesn’t try to create a fully fleshed out character here—this isn’t the point of the story. Instead, she offers a moment of compassion for the wild, brave boy who mocked the worried woman and his friends who knew to hold tight to the chains.

Paley writes with such grace about this young boy and his racially marginalized status, which it is implied precipitated his death. Samuel was loved and his family was never the same without him. Here is the story’s understated conclusion, one made possible through the omniscient stance of the narrator. And yet that simple, authorial declaration resonates with grief.

In the wake of this fall’s controversies about cultural appropriation, racism, and the role of empathy in writing characters who are demographically unlike you (whomever you may be, and whomever your characters may be), Paley shows us one way in which the heretofore old-fashioned, third-person omniscient perspective might be one of contemporary fiction writers’ greatest tools to elicit empathy for characters. If you can go anywhere with a character, where do we need to go to demonstrate an awareness of the fullness and complexity of a character’s life, and to do so with thoughtfulness? The first-person can do that in some cases (I think of Yunior in Junot Diaz’s The Brief and Wondrous Life of Oscar Wao, and more recently of Ferrante’s narrator Lenù). But omniscience offers another means to explore empathetically. As newly minted Man Booker Prize winner Paul Beatty aptly noted of Shriver’s cultural appropriation speech, “all the examples she cites are white writers appropriating other cultures. And it’s not just a top-down thing. It goes in other directions. That’s the thing that I find really hurtful about her perspective: the notion of who’s allowed to take what from whom.” In the universe of Paley’s short stories, a world ordered primarily by secular Jewish experience extends to the social problems that a lack of empathy can pose: in “Samuel,” this problem is embodied through the white adults on the train watching boys of color engaged in risky play. Had they intervened, Samuel may not have died. But Paley’s story also offers a complementary example to Beatty’s contention by venturing into the boy’s life, and into the minds of those who loved and grieve him. We see in “Samuel” the ways in which third-person omniscience extends the possibilities for inhabiting character in all directions, for all writers.