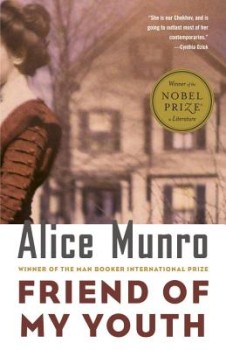 More than any single story I can think of, this is the story that’s had the most radical impact on my writing. Reading it for the first time was one of those mind-shattering “You can do that in fiction?!” moments.

It’s a very un-Alice-Munro-like Alice Munro story. Told in the first person, in numbered sections, it recounts the narrator’s attempt to reconstruct the life of an obscure Victorian poet, Almeda Roth, through newspaper clippings, book excerpts, and historical records. The story itself is well told, as you’d expect anything by Munro to be, with layer upon layer of detail. Each section brings you closer and closer to Almeda herself, spiraling inward on her and the abortive romance that may or may not have shaped her life.

And it’s that “may or may not” that elevates the story from good to brilliant. There are actually two versions of “Meneseteung” out there. The story was originally published in the New Yorker in 1988 and republished in the Best American Short Stories and then the Best American Short Stories of the Century. If you’ve seen this story, that’s the version you probably know. But in Munro’s own collection, Friend of My Youth, the story was published in a slightly different form: there’s one extra paragraph added to the end of the piece.

And that extra paragraph completely changes the story.

Why did Munro publish two versions? I don’t know and haven’t been able to find out. It’s possible that she wanted to publish the full version but her editor at the New Yorker asked her to take it out, and she was able to restore her preferred version, with the last paragraph, in her own book. But it’s also possible that she published the shorter version and, later on, re-envisioned the story and went back to revise.

To tell you just how this change alters the story would ruin the joy of experiencing it yourself. When my amazing teacher Ellie Schaffzin gave me this story back in 2003, she handed out a copy with two last pages, one without the last paragraph, followed by one with. So I read the first version of the story, thought it was over, and then turned the page and discovered the altered ending—and my writing has never been the same since. I recommend doing the same: read the New Yorker/Best American version first, then seek out Friend of My Youth and read the story again, with the added paragraph. I promise it’ll change your thinking about narration—and fiction—from now on.