Stories We Love: “Some Other, Better Otto” 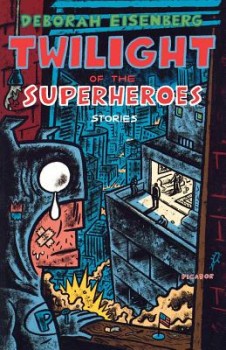 Some stories feel found, not written, their lines etched on the walls of ancient Lemuria, or coded into the seams of certain carbon isotopes, no more the product of fallible modern humanity than the laws of arithmetic or the curve of the Milky Way. The opening chapters of The Great Gatsby, for instance, possess this kind of inevitability, as does Deborah Eisenberg’s short story “Some Other, Better Otto,” from her 2006 collection, Twilight of the Superheroes.

Eisenberg’s Otto is a man who transmutes every conversation, philosophical conjecture, and family gathering into material for his own mental processes, seeking in the banalities of scandal and the dreary maxims of popular science the grounds for a little human dignity. Both heroic and ridiculous, he seems one of the primeval literary characters—someone given to us, not invented—a person devoted to the very intelligence that continues to make him discontented.

For the student of craft, the story also demonstrates Eisenberg’s total mastery of dialogue. As they speak to each other, her characters invariably reveal more than they communicate and ignore more than they hear. In “Some Other, Better Otto,” speech reveals the contours of a character’s mind, the inescapable patterns of his or her thought. Those patterns are often very funny.

From the story’s opening:

“It’s fine with me,” William said. “I always like to see Sharon. And we’ll survive the evening with your—”

“Well, we will,” William said. “And don’t you want to see Naomi and Margaret and the baby as soon as they get back?”

“I was reading a remarkable article in the paper this morning about holiday depression,” William said. “Should I clip it for you? The statistics were amazing.”

Otto’s misery develops and deepens within a story of exquisite beauty. Go read it.