"'The Resident' offers a critique of the residency itself and, more broadly, of the working conditions of the queer woman writer."

“The horror of the residency is not that one can’t leave; it’s that one doesn’t have to”: Nora Kipnis on Carmen Maria Machado’s version of the cabin in the woods.

I decided this year to take the leap into the life of a freelance writer. As such, the future is opaque. Perhaps seeking answers, I’ve been drawn lately to reading, and writing, fiction about writers.

In considering the craft of fiction and of a writing life, one could do worse than to study “The Resident,” Carmen Maria Machado’s dramatization of one writer’s descent into madness at an artist colony. In a nod to nineteenth-century convention, the narrator is named C— M— and the residency Y—. With its hand-under-the-bed scares, last-stop gas stations, lost children in the woods, and severed rabbits, “The Resident” is a poisoned feast of Gothic and horror tropes.

As writers, we’re told to avoid clichés like, well, the plague, yet Machado embraces them with a defiance that verges on camp. Positioning “The Resident” outside of the conventions of “high art” makes it possible for the story to problematize — or, to use a term our narrator favors, defamiliarize — the gatekeeping around the opportunities for its production. “The Resident” offers a critique of the residency itself and, more broadly, of the working conditions of the queer woman writer.

Y—, a former resort for Gilded Age millionaires, pulses with memory: literary, historical, and individual. After musing with pride on her new identity as a resident, C— is appalled when one of her fellow artists refers to themselves as colonists. “Was I actually just an invader,” she wonders, “bearing smallpox ridden blankets and lies?” As if to illustrate their link to colonialism and disease, the buildings themselves become objects of disgust: the hotel “swelled out of the ground like an infection”; a filigreed portico evokes Lovecraftian tentacles; a railing becomes a “leprous limb.”

Queerness is central to the ostracism C— experiences at Y—. After C— gives a reading of her work, one artist complains of her novel that she is tired of “madwoman in the attic” stories, then clarifies, the “mad lesbian.” Recalling a similar, real-life critique of an early draft of “The Resident,” Machado has said in an interview at New Limestone Review: “I took that criticism very seriously, of course, but then what am I supposed to do if I want to write about women (particularly queer women) and mental health? Are all of my characters supposed to be healthy, adjusted, ‘normal?’”

The critique references The Madwoman in the Attic, an influential work of second-wave feminist literary criticism by Sandra M. Gilbert and Susan Gubar. Responding to Harold Bloom’s idea of the anxiety of influence (i.e., the writer’s struggle to best his predecessors), Gilbert and Gubar propose that women writers suffered instead from an anxiety of authority: the absence of a canon altogether. Gothic metaphors of exile, illness, madness, and confinement highlight the relationship between women and a literary tradition that has not only excluded them for centuries but also defined them as incapable of creative contributions.

A recent essay by Cecelia Lasa in Nature further situates this problem historically, with the rise of the Gothic genre as reflective of the changing role of the novel, and the novelist, amid the decline of the British empire and flagging bourgeois enthusiasm for industrialization and science as institutions of unending progress.

In “The Resident,” images of economic decline in the surrounding town of Devil’s Throat evoke a similar eroding trust in our nation’s self-sufficiency. “The town is run-down and grey,” our narrator observes, “like so many of the old coal and steel towns that dotted the state. I’d describe the houses that lined the main thoroughfare as ramshackle, but ramshackle suggests a charm that these lacked.” The Rust Belt, a symbol of the self-defeating nature of American neoliberal imperialism, is the setting in which our narrator pursues her newfound literary success.

As can be imagined, encounters between the residents of Devil’s Throat and the “residents” of Y— are fraught with class conflict. Rather than depict outright aggression, however, Machado indulges in grotesque descriptions of the pustules and blisters of the locals we encounter, somaticizations of bubbling resentment which erupt at mention of the residency. After telling a local gas station attendant where she is going, C— notices that “one of his pimples had opened and left a comet’s trail of pus across his skin.” In a similar exchange with a police officer who pulls her over for speeding, the blister on his lip “seemed to sense” her “and expand outward, like an amoeba preparing for reproduction” as they discuss her destination. And soon after her arrival at the residency and her discovery that she is herself an outsider, though for other reasons, C—’s resentment will boil over, too, in an eruption of similar “abjections,” as she calls them, on her legs—a painful reminder of exile. 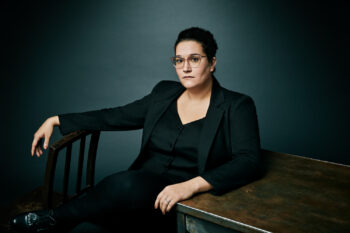 This is where horror is so essential for the social critique at the core of “The Resident.” In the cultural imagination, the disenfranchised industrial worker and the queer woman writer might seem to be at odds; a realist style, like a weathervane, might affirm that. It is through the visceral experience of horror, which evokes feelings of fear and disgust, that we come to understand that these very different experiences of degradation are rooted in the same conditions.

Navigating this desolate landscape, as well as an industry of consolidating publishers, slashed university departments, and freelance rates of a dime a dozen, our writer has modest expectations of future success. Acceptance at Y—, she hopes, will lead to “a time when, instead of relying on the generosity of others, I would be able to stand on my own as an artist.”

Yet Y— proves to be predominantly a place of decadence and dissipation. Residents feast on wine and steak, sleep in high thread count sheets, wander the grounds, and have sex in common rooms. The residency, C— concludes, is a place for artists to “cloister themselves from the rest of the world.” In turn, she cloisters herself from them, indulging in vague childhood memories of a Girl Scout camp nearby, where for the crime of kissing a fellow camper, our sleepwalking narrator was dragged into the woods and left there by her bunkmates.

The narrator comes to value the opportunity the residency provides to retreat into her own thoughts. “You had to find them, be aware of them,” Machado writes, “but once you located your thoughts you never had to drive away.” In a peculiar twist on the cabin in the woods trope, the horror of the residency is not that one can’t leave. It’s that one doesn’t have to.  C— longs to be needed, wanted, accepted, which the residency seemed to offer, at least at first. But that acceptance proves to be so deeply passive that it’s ultimately wounding. Her comings and goings are inconsequential, even her letters home ignored.

Many writers have attested to the benefits of deep focus on a project. What “The Resident” touches upon are the working conditions and societal expectations of the writer, especially of mad, queer, and women writers, which encourage self-imposed exile at great psychological expense. The result is a kind of creative hyperventilation, a signal to panic. Experiencing this, C— leaves, seeking sustenance from the world outside.

But C— doesn’t leave for long. In a brilliant final turn, the story reveals itself to be an application to yet another residency. Confined to an echo chamber of patronage, our narrator is doomed to move from residency to residency, exile to exile. In that way, she is not so unlike the Brownie, the domestic faerie-servant who works under cover of night and who, in the narrator’s memories, young Girl Scouts are encouraged to see in their own reflections. 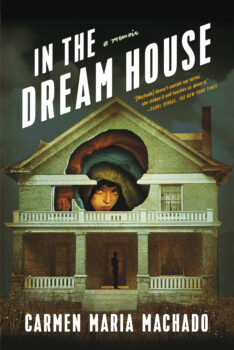 When C— looks at her reflection, she sees no Brownie. She sees nothing. C—’s journey is one of self-acceptance, even if her self is indefinable. When presented with the choice of traditional femininity (for the Brownie, domestic servitude; for the woman writer, the production of “chick lit”) or to be “just as good as the boys” (whether in literature or in wilderness survival) our narrator chooses a possibility as yet unknown. The story ends with an instruction, a hope, that the reader, too, can discover the invisible parts of themselves. “I can tell you with perfect honesty that that night in the forest was a gift. Many people live and die without confronting themselves in the darkness. Pray that one day, you will spin around at the water’s edge, lean over, and be able to count yourself among the lucky.”

During this time of isolation and loss, I think many of us can identify with the experience of seeing an empty space in the mirror where we once saw what we were supposed to. There is no manual for this, nobody to compete with at this game. But “The Resident” offers a message of hope for those of us who are, in various ways, transient, confined, undefined. For the queer woman, the mad woman, the sentinel who refuses to comply—or the writer who wishes to leap into a new life—“The Resident” suggests that the absence of authority might also be an opportunity to create one’s own.