Once upon a time in 1978, a dear friend gave me Colwin’s second novel, the Manhattan fairy tale Happy All the Time, to ease my then-broken heart. 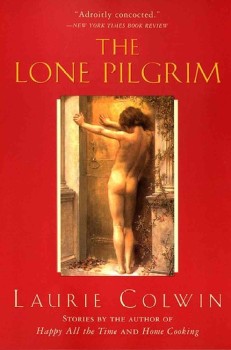 Certain short stories, like certain poems, etch onto memory. Read again and again, taken to heart, known by heart. One for me is Laurie Colwin’s gentle, stately story “Travel.” Her stories are among my favorites, but “Travel” is my desert island choice, if forced to choose, of the baker’s dozen love stories collected in The Lone Pilgrim (Knopf, 1981).

According to my flyleaf note, I purchased the book in July, 1982 – the hot summer I haunted air-conditioned bookstores and movie theaters, awaiting the birth of my first child.  Colwin called to me from a sidewalk table on Massachusetts Avenue in Cambridge. I read the book like a letter from a friend, starting on my bus ride home. Later that afternoon, I finished it, sitting on our postage stamp back porch, sipping lemonade with a sprig of mint from my husband’s herb patch. I had sworn off iced tea until the baby came but you cannot read Colwin without wanting something delicious to eat or drink. Her characters, like the author, are “domestic sensualists;” her cooking essays are fixtures in my pantry.

Once upon a time in 1978, a dear friend gave me Colwin’s second novel, the Manhattan fairy tale Happy All the Time, to ease my then-broken heart. Heroines Holly and the aptly named Misty wander the corridors and canyons of Manhattan, as lost and confused but finally destined for happiness as Shakespeare’s Rosalind and Celia in the Forest of Arden.  All will be well, Colwin promises and delivers. Journeys end with lovers meeting. But “Travel” is a more rueful love story; suffused by a shadow of loneliness, infused by the apprehension that the ultimate end of the journey must be lovers parting. Narrator Marguerite meditates on the surprise of having met and married her beloved husband, and considers the depths, mysteries, and space between them.  No one, including herself, expected she would marry, and she remains protective of her own and her husband’s solitude. Certainly Laurie Colwin knew Rainer Marie Rilke admonished a young lover to do exactly that; the opening quotation in her first novel Shine On, Bright and Dangerous Object (1975) is Rilke.

Throughout the story Marguerite’s simple rhythmic language is incantatory. The words sift and flow; there is an almost tactile satisfaction to reading this prose, like feeling a handful of sand funnel through your fingers. Marguerite never names her spouse; she refers to him over and over – like a refrain, a Homeric epithet – as “my husband.”

This man who became her husband blew into Marguerite’s life unexpectedly. The couple met in their thirties and thus, Marguerite says, “our sense of personal history is wide and separate” which “accounts for a lot of richness, but quite a lot of sadness, too.”  He is a concert violinist, a Vietnam veteran. In retrospective reverie she recalls their chance meeting on tiny Tangier Island, followed by separate returns to Manhattan where both lived.  She recounts his first visit to her Spartan apartment, “at that time I lived in all ways like a Shaker,” and the meal she offered him – an “eccentric” menu of “strained yogurt, pickled cabbage and salted Japanese plums…carrots with honey and garlic…the odd tastes of a solitary person. He ate what was set before him and never said he found the meal strange, which warmed me to him.”

Now, well into the marriage, he still loves to fly to out-of-the-way destinations on little spur airlines. With silent foreboding of fiery crashes, Marguerite accompanies him. He brings along, like a Tim O’Brien character, the things he carried in Vietnam: “an ammunition pouch, a dog-eared copy of the ‘Italian’ Concerto, a leather-bound diary, and his army belt – his relics of the war.” The couple never speaks of what he carries, “but it is a fact between us, since I always unpack for him.” Another unspoken fact between them is his knowledge that she never gets used to flying, “that I am always caught between thrill and fear.”  The story doesn’t end with the disaster her nightmares portend.  Rather, the reverie continues like a dream; past and present extend into a vision of their future. Marguerite imagines they will fly to yet another remote place “so that I can ask, some wide, scopeless afternoon on a bleak winter’s day, ‘Remember when we flew around Key West…?’ and my husband can nod yes, with exclusive understanding.” She foresees a time when the flights will become their shared experience and history, their mutual intimate point of reference.

“Travel” appeared in The New Yorker in March, 1975. Almost exactly a year later, Elizabeth Bishop’s “One Art” was published in the magazine. Both story and poem catalog artifacts of love and loss, evoking every reader’s own memories and talismans – pressed flowers perhaps, a matchbook, a solitary un-mated earring. Thematically and tonally linked, both story and poem suggest that loving is a continual process of holding on and letting go; requiring practice and acceptance. As Bishop says,

‒Even losing you (the joking voice, a gesture

I love) I shan’t have lied.  It’s evident

The art of losing’s not too hard to master

Both story and poem, both authors, remind that all journeys end in lovers parting. This message in “Travel” seems prescient now since Colwin’s own journey ended in 1992, far too soon. She lay down to sleep one night beside her husband and did not awake the next morning. A quiet, domestic disaster.

William Maxwell says in his family history Ancestors, “It is not true that the dead desert the living. They go away for a very short time, and then they come back and stay as long as they are needed. But sooner or later a time comes when they are in the way …there is no place for them in the lives of those they once meant everything to. Then they go away for good.” Usually Maxwell speaks for me and to me with uncanny precision. In this instance though, I disagree. When I need a shot of Laurie Colwin, I can always find her in my study or my kitchen. There will always be a place for her on my shelves. 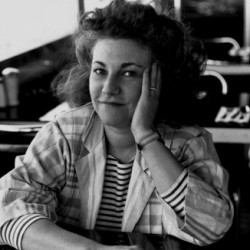 But I wish she were still fully here. Writing about loving, writing about growing older, and reminding us to appreciate every savory sensory moment. Since she’s not, I re-read her stories and use her recipes, including the best lentil soup ever, deduced from her chatty impressionistic directions in her second collection of cooking essays, More Home Cooking.   I hope her daughter – only eight when her mother died – has Colwin’s recipe box, as well as her manuscripts. May she always find something of her mother there, the wonderful Laurie Colwin.

The last novel published before her unexpected death (one more appeared posthumously) is entitled Goodbye without Leaving (1990). And that’s what she did.  Like another wordsmith, E.B. White’s Charlotte the web spinner, Colwin managed to say goodbye without leaving.