"I’m a big proponent of tangible objects in storytelling."

An Interview with Caleb Michael Sarvis

"I think it’s human nature to dream of what’s on the other side." Benjamin Woodard chats with Caleb Michael Sarvis about his debut collection, Dead Aquarium, out now from Mastodon Publishing.

In his smart debut story collection, Dead Aquarium, or (i don’t have the stamina for that kind of faith), recently released by Mastodon Publishing, Caleb Michael Sarvis whisks the reader into a Florida both real and imagined. Over twelve stories and one novella, hurricanes decimate neighborhoods, aquatic rodents comfort a grieving daughter, a robotic dinosaur eats cigarettes, and a thumb detaches itself from a hand. Yet scenes of deep emotional resonance also lurk within these stories: one man looks for his lost brother; another inherits the ashes of his dead parents; a boy considers the mortality of his grandfather. Throughout, Sarvis toys with the strange in order to tap into feelings that make for memorable tales.

I was lucky to publish one of Caleb’s stories, “Baby, It’s Cold Outside,” in my journal, Atlas and Alice, a couple years ago, so when I learned he was about to launch his first book, I jumped at the chance to talk with him about his process.

Caleb Michael Sarvis lives in Jacksonville, Florida. He is the senior fiction editor for Bridge Eight Press and co-hosts the Drunken Book Review Podcast. The stories from Dead Aquarium first appeared in journals including Hobart, Saw Palm, and Split Lip Magazine. We conducted this interview via email over the course of a week.

Benjamin Woodard: First, let’s start with kind of a softball: What made you choose Dead Aquarium as the collection’s title? Also, what brought about the decision for the subtitle, i don’t have the stamina for that kind of faith?

Caleb Michael Sarvis: Dead Aquarium didn’t come about until after the collection had been picked up. It’s the subtitle of one of the sections in the novella (“Emerson”), and I just kept coming back to that phrase and the juxtaposition of those two things. Then I thought about the collection as a whole, how I can’t help but write about water and death, and a lightbulb sort of clicked for me.

As for the subtitle, that’s just me paying homage to Birdman or (The Unexpected Virtue of Ignorance). Like my collection, that movie has an imaginary character and several allusions to writers before us (Carver, Shakespeare) and again, I found a line in the novella I kept coming back to that almost was the title itself. 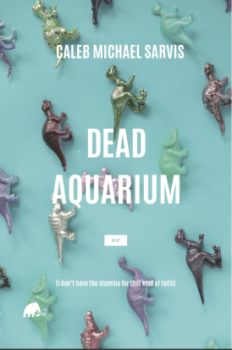 It’s interesting, because while I didn’t think of Birdman, the use of the subtitle did bring Kurt Vonnegut to mind for me. In the novella, as well as throughout the collection, there exists a mix of real and fantasy, or reality as we know it and a sci-fi version of that same world. What draws you to this narrative mix?

I think it’s human nature to dream of what’s on the other side. Whether it’s believing in aliens or wishing for Middle Earth to exist. As a writer, I’m not actually interested in the other world, as much as I am in the manifestation of the other world. That desire for escape, to turn back time, to leave the world as we know it . . . that’s much more interesting than the destination itself.

Florida is essentially a character in the book, as the environment frequently plays a part in your narratives. Florida is also known for its escapism, whether it’s Disney World or as a destination for spring break or retirement. How much does living in Florida influence you as a writer? Do you feel like there’s a “Florida Style,” as there are so many exciting books coming from the state?

It influences me to the extent that I feel surrounded by inspiration at all times. There are mascots and beaches, but there are also illegal reptiles and catastrophic hurricanes. If there’s a “Florida Style” then I’m just going to call it “beer,” and each of these Florida books is a different kind of beer. Whether it be Dead Aquarium, or Alligator Zoo-Park Magic by C.H. Hooks, or Mostly Dead Things by Kristen Arnett, or even Florida by Lauren Groff, you’re going to get something entirely its own.

Funny you mention beer, because while Florida breathes through these stories, there’s also a beer motif that peppers the collection. Goose Island is the most prominent (as one of the stories uses it for a title), followed by the bar in “Emerson.” Was this a conscious through-line, or did it come together as the stories were written?

It was kind of neither. I wrote each story as an isolated thing and because I’m a drinker, my characters became drinkers. It was something I considered when retitling the collection, this idea of drinking and swimming (John Cheever’s “The Swimmer” is one of my favorite stories ever), but in the same way I am uncomfortable with empty hands, I didn’t like when my characters were too static.

How long did the collection take to write, assemble, and find a home at Mastodon Publishing?

All in all, the process took about three years. I wrote the first draft of the first story in January of 2015, and I wrote the first draft of the last story around August of 2017, I think. The book ended up getting picked up in December. Some stories worked pretty early on, while others required a lot of revision. “Scoop Carry Dump Repeat” is that first story, but I didn’t finish editing the thing until September of 2017.

You run your own press, Bridge Eight, and I wonder how it was being on the other side of the process with your own book?

I learned a lot about how to treat an author you’re publishing, and there are plenty of horror stories about publishing with small presses. I was fortunate enough not to be part of a horror story, but there are things I didn’t like that I am adamant about Bridge Eight not doing.

You mentioned Carver and Shakespeare earlier. Do you consider these writers as influences to your own work? Who do you turn to and read when you’re either writing or thinking about narrative ideas?

I love Carver but I wouldn’t say he’s an influence on my work. I’m pretty big about being economical with my language, but stylistically, we’re not that alike. Shakespeare’s work deals a lot with dualities and a particular kind of madness that I am all about. His characters’ motivations are always clearly defined and a lot of the time their behavior can be traced to mistakes they made along the way, which I enjoy a whole bunch. 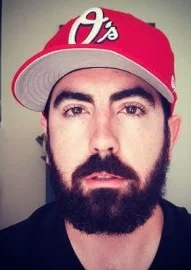 Many of the stories in the collection feature a memorable image that lingers after the narrative’s conclusion. There’s the runaway finger in “Baby, It’s Cold Outside,” the pool full of Precious Moment dolls in “Sinking Moments,” and the tin koala in “Gastropod,” to name a few. I wonder if, when writing, images/objects like these appear as you draft, or if you start writing thinking something like, “Ok, there’s a tin koala. Let’s see what happens next”?

I’m a big proponent of tangible objects in storytelling. For one, they can be weird and interesting and like you said, beg the reader to think, “Let’s see what happens next.” But more importantly, objects have a real weight and texture that other components of story don’t, and when you’re trying to convey that figurative or emotional weight, objects are the best.

Is there one object that, to you, feels particularly personal? Maybe one that you’ve carried around in your mind for a while, waiting for the right narrative fit?

I included a lot of objects in the novella. I’d been waiting to use a yo-yo for a while, and though it isn’t a big part of the story, I liked writing that the yo-yo resembled a meteor as it fell. The most personal one in the book might simply be the different editions of Calvin and Hobbes. Kevin wags the book in “Scoop Carry Dump Repeat” because I would always wag the books as a kid.

One question that I feel every writer gets is “How much of you is in the book/story,” so it’s nice to hear this tidbit about Calvin and Hobbes. Do you ever look at a story after it is finished and suddenly see autobiographical stuff you hadn’t noticed while writing?

All the time. The scene in “Gastropod” where the narrator’s father takes a bat to the man’s door because the narrator’s mother is having an affair, that’s based in a fuzzy memory of mine. I even read that one out loud in front of my mom once, not even thinking about it. I’m constantly pulling from these moments in my life and not realizing it until someone else reads them.

What was her reaction when you read this to her?

Either she didn’t catch it (I think most people daydream at readings), or she chose not to address it. I can’t be sure, though.

You’ve recently tweeted about a novel in progress. Is that your next project? And if so, what’s it about?

The novel is my next project, though there isn’t much tinkering to be done lately. Right now I’m shopping it around, hoping someone will bite.

It’s about two things: a man who made a recovery plan on how to survive if he were to lose his wife, then he loses her, and an ex-ballplayer who struggles with letting go after the death of Major League Baseball. Both are the same man, and he loses his wife and baseball at the same time, which takes him to demolition after demolition.

If you had to choose one story from the collection to save in a time capsule for future readers to discover, which would you select (and why)?

This is a really tough question, because there are stories that are so endearing to me for different reasons. The final image of “Gastropod,” or both the Salamander and Sebastian in “Emerson.” I love “An Unfaded Black” because it started as Mad Men fan fiction. But I’m leaning towards “Goose Island” because it’s just on the edge of absurdity. You have to suspend your disbelief just a smidgeon to really buy into it, which is the kind of story I want to bathe in.