Both Ways Is the Only Way I Want It, by Maile Meloy

In Malie Meloy's most recent collection, Both Ways is the Only Way I Want It, there are no clear lines, no obvious right answers. Meloy's characters are caught between two choices that are both right—or both wrong—and that’s what makes their decisions so difficult, and makes these stories so compelling. In reading them, you feel, as the author puts it, “both the threat of disorder and the steady, thrumming promise of having everything [you] wanted, all at once.” 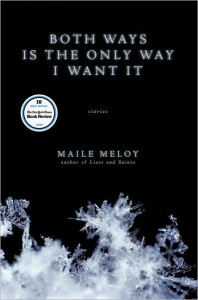 Ambiguity might be the most misused term when talking about fiction. As a teacher, I often hear students say, “I wanted the story to be ambiguous.” Nine times out of ten, this is code for “I didn’t know how the story should end.” Should the character take action, or not? Should he understand something new, or should he remain in ignorance? In those ambiguous endings, the writer punts, leaving everything hanging in the air. “I wanted to leave it up to the reader” is the usual excuse. It seems like generosity, but it’s really wishy-washiness. It’s writerly laziness. And it’s a horrible tease: you get the reader all keyed up and ready for the payoff—the shift in perception or the moment of reckoning or the final disappointment—but the payoff isn’t coming.

Which brings me to Maile Meloy’s stories in Both Ways Is The Only Way I Want It—stories whose endings provide no comfortable resolution, stories that often leave their characters in apparent limbo. But this is ambiguity as it should be done: Meloy is neither wishy-washy nor lazy; she is perfectly in control. The stories in this brilliant collection deliberately hold the reader in uncertainty, mining it for meaning. They are anything but punts.

Each of Meloy’s characters is pulled in two different directions. In “Travis, B.,” a young Montana ranch hand falls in love with his teacher—a lawyer who is herself split between two jobs on opposite sides of the state. In “The Girlfriend,” a father is caught between wanting to know the painful truth about his daughter’s death and the equally painful state of not knowing. And in “Lovely Rita,” Steven is torn when the titular Rita comes up with a desperate scheme to earn money and leave town:

Steven wants to stop her, but he also wants, desperately, to have Rita himself. For these characters, both ways is the only way they want it. They don’t want to choose, and their conflicting longings drive these stories.

Those same conflicted longings also push the stories towards their ambiguous endings. At the end of “Two-Step,” for instance, Naomi waits in her lover’s car while he is inside with his pregnant wife. We never learn if he comes outside or stays in, because that’s not the point. The story is in the elaborate dance beforehand, the complicated relationship that slowly unfolds as the woman, her lover, and his wife—the woman’s friend—meet in the kitchen. In “Spy vs. Spy,” long-simmering resentment boils over between two brothers on a skiing trip. But even as the brothers tumble down the mountainside, fighting, there is no reconciliation or resolution. Nothing really changes:

“It won’t kill me,” George said.
And it was true, nothing would. The knowledge broke over Aaron in a wave, through his oxygenated good mood. They were bound like two dogs with their tails tied together, unable to move without having some opposite effect on the other, unable to live a single restful minute without feeling the inevitable tug.

Ambiguous, appropriately enough, has two possible meanings. The first is the way my students use it: “undecided” or “unclear.” But the second is “capable of being understood in more than one way.” In a bad ambiguous story, the story is actually unclear: the reader doesn’t know what to make of it, or what happened. It’s as if he or she doesn’t have enough light to see. But in a good ambiguous story, like those in Both Ways, the reader has a kind of dizzying double vision: he or she understands the story in more than one way. We understand both how much Steven wants to win Rita and how much he also wants to save her from her own plan; we understand both that Naomi sees her lover’s shortcomings and why she will stay with him anyway. In these stories, nothing is resolved in the traditional sense, but the moments of uncertainty themselves become meaningful. For Meloy’s characters, the situation may not change, but at the end of the story, they are at last seeing clearly, even if what they see is complicated and contradictory.

Amy Hempel once described a story as “when two equally appealing forces, or characters, or ideas try to occupy the same place at the same time, and they’re both right.” That definition applies perfectly to Both Ways. There are no clear lines here, no obvious right answers. Meloy’s characters are caught between two choices that are both right—or both wrong—and that’s what makes their decisions so difficult, and makes these stories so compelling. In reading them, you feel, as Meloy puts it, “both the threat of disorder and the steady, thrumming promise of having everything [you] wanted, all at once.”

– If you’re shopping for one of Malie Meloy’s books, click here to buy from a local independent bookseller.