[Reviewlet] Happiness Is a Chemical in the Brain, by Lucia Perillo

Poet Lucia Perillo's first foray into fiction is a collection of wonders, obsessions and undeniable urgency. 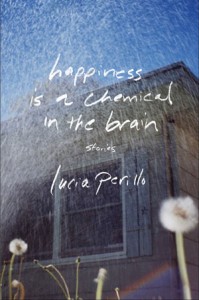 I used to believe one could not sit down and read an entire short-story collection the way one could an entire novel in one sitting. Perhaps because, like poetry, the short form of fiction can be dense, and the collected short form often strikes the same—albeit beautiful—note. But Lucia Perillo’s Happiness is a Chemical in the Brain is a collection of wonders that readers will devour with immediacy.

As a Pulitzer Prize-nominated poet and MacArthur Fellow, it’s no surprise Perillo’s writing is stunning in its precision and imagery. Perillo takes us on tours of the seaside, the country, and the urban with a never-been-used-before lens. All the while, narrative doesn’t take a backseat to description. Yes, her characters are quite often stuck—in country houses, in addiction, in love, in geriatric homes—but they’re never standing still, and that distinction is what gives this collection an undeniable urgency. Perhaps these stories would not easily sell on premise alone (woman becomes deeply obsessed with her vacuum cleaner) but they are better, more surprising for it.

Perillo’s prose leads us down an unwritten path, as we discover the secret worlds of her characters and their enemies: their obsessions, their boredom, their fantasies of revenge, and their hearts. The prose is so unabashedly honest that you will follow these characters wherever they’re headed: a mother who spies on her son through the woods, a sister whose main goal in life is to stay fourteen forever, a woman recovering from alcohol abuse and seventeen Bad Boys, a wife who fantasizes about the life of the French President while stuck in a cabin (stuck in this marriage, in this life) with her husband.

Perhaps the collection is best described in my favorite story, “Doctor Vick’s,” when Perillo writes, “You know the only true world is the one you carry inside you.” These stories are compelling journeys because they are so true.