Alissa Nutting has "story" written in ink on every page of Unclean Jobs for Women and Girls, her lively, well-imagined, and jaw-droppingly smart prize-winning debut. Imagine Donald Barthelme writing smart feminine narratives, Mary Gaitskill sans the kinky sex, or Margaret Atwood turning to dry, Colbert-style humor, and you may start to get an idea of what to expect. 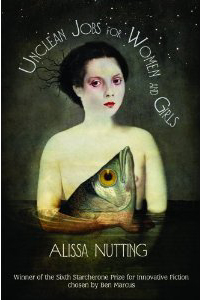 I’m a traditionalist when it comes to reading fiction, but sometimes I look for a kick. Years ago I began to pay attention to Starcherone Books’ prize winners when Zachary Mason’s The Lost Books of the Odyssey wowed me out of complacency. Now I seek out innovative fiction publishers who really publish innovative fiction, and not some narrative prose poetry that didn’t cut it in the chapbook market: work that claims innovation by way of sentence structure.

What I mean is, when I look for innovation in fiction I want fiction, real fiction. As I say to my students straight out: It’s all about the story, stupid.

Well, don’t tell that to Alissa Nutting. She’s got “story” written in ink on every page of Unclean Jobs for Women and Girls, her lively, well-imagined, and jaw-droppingly smart prize-winning debut. I’ve got my work cut out for me trying to describe what you’ll get out of this collection: imagine Donald Barthelme writing smart feminine narratives, Mary Gaitskill sans the kinky sex, or Margaret Atwood turning to dry, Colbert-style humor, and you may start to get an idea of what to expect.

Yet, in spite of the sometimes impressionistic, sometimes realist, sometimes naïve-painting-inspired settings, the characters remain painfully familiar: a sister attempting to save her paraplegic brother from terminal depression, a transsexual attempting to hide her past from her boyfriend and from KKK bigots, a daughter trying to reconcile to her abusive mother, women coming to terms with infertility or with fatal diseases—and girls and women just trying to connect emotionally to the people in their lives.

I would abstain from labeling Nutting’s collection “women’s fiction” if it didn’t treat so heavily on the grotesque importance assigned to a woman’s beauty, and on the paradoxical conflicts and stupidities that such unreasonable demands create.

In “Model’s Assistant” for example, a party nerd is granted access to an elite night-clubbing society through her improbable friendship with a supermodel. The protagonist confesses, “Since that night my life has changed in a myriad of ways. I’m still no one, unless I am with Garla, and then I become With Garla, a new and exciting identity that makes nearly everything possible, except being a model myself. And except being someone when I am not with Garla.”

The party nerd’s life improvement reflects in the leftover attention that she can scrape from the model’s groupie followers. And when that friendship is threatened, the odd, unintelligible language the supermodel speaks takes an ominous turn: “Put you in tiny coffin,” says the supermodel when “breaking up” with the assistant, a poignant and telling variation from her earlier catch-phrase, “Special coffin.” The fact that Garla speaks no English and can only utter catch phrases that don’t always make sense (“Vodka, you know?”) is of no concern to the beautiful people who worship her.

In “Porn Star,” “Ant Colony,” and “Bandleader’s Girlfriend” the situation is reversed: women are trapped by their beauty and sexual drive, and are reduced and victimized by evil surgeons, cold-blooded Idol-style audiences and shrewish sisters with terminal cancer whose jealousy grows to appalling proportions. The beautiful protagonists of these stories are only partially aware of the potential dangers of the envy they attract: “I was very used to people feeling like they were more important then me, but less beautiful,” says the heroine of “Ant Colony.” “I often felt that every transaction in my life somehow revolved around this premise.”

Similarly, in “Band Leader’s Girlfriend,” the flighty Claudia/Sorcerella has trouble shaking off an overbearing sister who makes it a habit to call her and hang up on her, or call her and shout. “I feel like I am some sort of hostage negotiator, except Sister is both the hostage and the captor,” ponders the overwhelmed narrator. 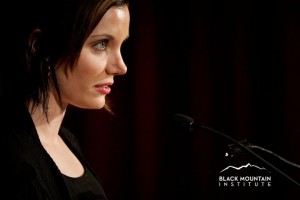 Nutting is especially brilliant when revealing the dysfunctional layers of her characters’ otherwise glib and (mostly) carefree lives. The transsexual narrator in “She Man” reveals that a dog-murdering pimp is blackmailing her, this after a cheerful description of a perfectly ordinary and satisfying life as “queen of kitsch.” The relationship between the narrator of “Deliverywoman” and her online buddy, FluidTransfer69, echoes the usual she said/he said disconnection of casual cybersex partners that happens when one takes the other more seriously than the situation warrants. But this otherwise common scenario takes a turn for the morbid when the narrator reveals that her mother, convicted for murdering her father, was preserved cryogenically and her body is up for sale on a futuristic e-Bay style auction house.

Unclean Jobs harnesses this type of Jerry Springer drama to bring humor and postmodern insights to these action-packed short stories. You can spend the time chuckling as you turn the page, or you can ponder the prophetic vision of the near future that this collection delivers. Either way, reading Alissa Nutting’s fiction more than satisfies.