Julian Mazor's wonderful, unsung second collection of stories, Friend of Mankind, published in 2004, thirty-six years after his first. Mazor’s elegant language evokes settings that are simultaneously a backdrop for and a mirror of his characters’ inner lives, and his compassion for these characters is almost physical. 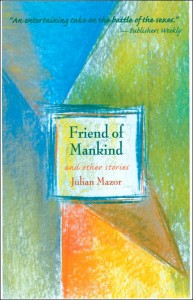 “The great question—which I have not been able to answer—is, ‘What does a woman want?’” The baffled husbands in Friend of Mankind (Paul Dry Books), Julian Mazor’s thoughtful second collection of short stories, might well echo the words of Sigmund Freud. Here love doesn’t go south without a struggle. “Gray Skies,” the first story, chronicles the deteriorating marriage of a violently incompatible American couple. As Harry and Wanda drive through vivid Irish landscapes, Harry feels “great sympathy for the sincerity of (his wife’s) unhappiness,” even as he admits he is powerless to “get her to look my way and smile and forgive me and forgive herself.”

One of the book’s charms is the development of recurring characters across more than one story. In “The Munster Final,” again set in Ireland, an older and sadder Harry contemplates remarriage. The story commences in a high pitch of tension as his girlfriend of two years has given him an ultimatum. Although Harry loves Ardis, “the idea of settling down and starting over with a new wife unnerved him and oppressed him almost to the point of illness.”

Mazor’s elegant language evokes settings that are simultaneously a backdrop for and a mirror of his characters’ inner lives. His compassion for these characters is almost physical. Temporarily energized by the crowd at an Irish sporting event, Harry feels “a pleasant excitement himself, the false spring of the sporting life.” During his night of final decision, he collapses in a field where “the grey light seemed to waver and bend.” Later, “the stars shone down in a vast profusion of benevolent light.”

Some writers use their characters as mouthpieces for their own verbal pyrotechnics, but Mazor invites us to listen to characters from various times and places across America. “The Lone Star Kid,” Jack Atherton, a teenage football star in 1960’s Texas, speaks quite differently than the narrator of “Skylark,” John Lionel, a teenager in 1940’s Washington, DC. But both characters are principled young men who nevertheless treat their girlfriends cruelly. Jack, cocky and the center of his town’s attention, feels no remorse over rebuffing Sally. “She…said I was a person that didn’t have no heart and only wanted to hurt people. The more I see of Sally the more I like that girl from Honey Grove….” The less confident John is infatuated with a mysterious coed who later humiliates him, forcing him to swim the polluted Potomac. John feels revulsion toward Alice, the girl he feels obligated to continue seeing. “When she answered the phone and I heard her sweet voice, I felt a kind of loathing for her.”

“The Lone Star Kid” and several other stories treat not only themes of love’s private battles, but the larger, societal strains of racism, “the complexity of this sad, old problem” as one character puts it. When Jack Atherton’s family is threatened by white thugs after his brother brings home a black friend, Jack waits for the men with a shotgun. He is no icon of political correctness, but like all the men in these stories, he strives to do the right thing—most of the time.

Sometimes ‘the right thing’ is impossible to discern in the pull of conflicting loyalties. The last two stories are especially poignant. Walter Desmond, a retired Virginia banker, is assaulted by duality: there is constant tension in “The Lost Cause” between Walter’s self-described “moderate” Old South views—which his henpecking wife deems “unreconstructed thinking”—and her own progressive ideas, ironically undermined by her unrestrained tongue. Family loyalties are strained to the breaking point as the Civil War is re-hashed in verbal skirmishes between his wife and Walter’s mother, a brittle aristocrat. The final story, “The Modern Age,” tosses the now-widowed Walter into “uncharted waters in which a body could drown,” the unexpected passion of a May—December love affair in which, he fears, “good sense went straight to hell.”

In Friend of Mankind, bewildered men retain their humanity when both sense and affection seem to fail. Only one quibble: Not all unhappy wives resort to bitter verbal attacks. Yet many of Mazor’s women characters are less convincingly drawn than his men because the author offers disenchanted wives such a limited repertoire of behavior. 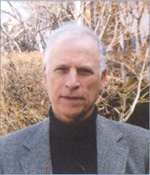 – Read an excerpt from Friend of Mankind.

– Five of Mazor’s stories (published between 1963 and 1975) can be read on the New Yorker‘s website; registration is required to read the full pieces, but excerpts are provided.

– Read this enthusiastic review of Julian Mazor’s first collection, Washington and Baltimore (Knopf, 1968), by Mark Gauvreau Judge in 2001. A taste:

Though out of print for many years, it is still the best book ever written about the real Washington: the place where people live in rowhouses, go to diners and jazz clubs, and couldn’t identify Kay Graham in a lineup; the place where my grandfather, a baseball player for the Washington Senators, raised a family, including my late father, who worked as an editor for National Geographic and found himself on Capitol Hill maybe three times in his life.

And here’s a video of Mark Gauverau talking more about why he loves and recommends Washington and Baltimore, and about his experience interviewing–and eventually befriending–Mazor: