FWR's Own in Glimmer Train

At Fiction Writers Review, a key part of our mission is to support emerging writers—and hey, we’re emerging writers, too. So I’m especially pleased to report that the current issue of Glimmer Train (Issue 75) contains stories by not one, but TWO of the FWR staff: our Associate Editor, Jeremiah Chamberlin, and our site’s designer/graphic design goddess, Marissa Perry. Both are amazing writers, and we’re not just saying that because we know them. 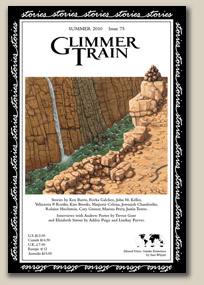 It’s especially appropriate to highlight Glimmer Train this month—Short Story Month—as it’s one of just a handful of journals that publish only short fiction. Moreover, Glimmer Train provides great support to its writers, offering payment (which many journals aren’t able to) and searching out first-time authors. And that attention to quality pays off. The editors report:

In a recent edition of Best American Short Stories, of the top “100 distinguished short stories,” ten appeared in Glimmer Train Stories, more than any other publication in the country, including the New Yorker.. We are pleased to say that, of those ten, three were those authors’ first stories accepted for publication.

Order Glimmer Train Issue 75 for $12, or—even better—subscribe for a year (four issues) for just $36. For submission guidelines and a monthly breakdown of GT‘s contests, click here.