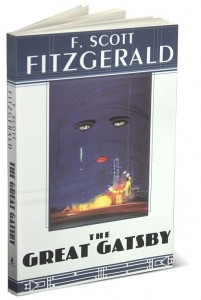 We’ve seen a lot of book adaptations lately, from Where the Wild Things Are to Precious to The Lovely Bones. Screenwriters and directors cut scenes here and add scenes there to transform the book into a cohesive viewing experience. A good adaptation can be a brand-new work of art. But in the process, the book is often boiled down to its essence while the particulars–the writer’s own words–are often lost.

The American Repertory Theater in Cambridge, Massachusetts, is trying to work around that. The A.R.T.’s latest production is “Gatz,” a staged reading of F. Scott Fitzgerald’s novel The Great Gatsby in which the original text is the show:

Gatz is conceived as a single six-hour production in which an ensemble of 13 actors bring to live every word of the novel with no text added and none removed.

The show begins as an office worker (played by actor Scott Shephard) finds a copy of The Great Gatsby and begins to read it aloud. An NPR review explains what happens next:

It doesn’t take long for things to turn strange. Co-workers wander on and off stage — an assistant, a janitor, a man in a suit. The lines between the narration and the action begin to blur. It’s as if the book is coming to life. Then, the janitor blurts out a line of dialogue from “Gatsby” character Tom Buchanan.

And so it goes, ramping up, getting more surreal. While “Gatz” stays true to the words, it takes liberties with every prop, sound effect and stretch of the imagination.

The show is so long that it’s split into two parts, separated by a dinner break.

So why do it this way? Every novelist’s dream: a profound love for the novel itself, exactly as it’s written. “What made this a great book,” director John Collins explains in a video interview with NPR affiliate WBUR, “was not so much the story, or the characters, or the themes, or the symbols, but this writing. We thought, well, here’s a great crazy idea to start with, here’s a great crazy project, here’s a great impossible task: we’ll do every single word of it.”

Even the most slavishly faithful adaptations are based on plot and characters; usually, the only use of the actual text of the book is in dialogue, or (shudder) voiceover. Beautiful, powerful, pivotal passages of prose are condensed into a single shot, or left out entirely–never mind that the author probably spent weeks fine-tuning the language and picking just the right words. So as a fiction writer, I can see the appeal of the “Gatz” type of adaptation: the writing itself is in the spotlight the whole time.

What’s more, the show is intended to dramatize the blurring of the boundaries between reality and fiction. Collins continues, “When you read a book that you love… you start to see the people that you know in the characters. And you also start to see the book around you, when you get that involved. The line begins to blur a little bit between your own reality and the reality of the book.”

You can see the A.R.T.’s trailer here and snippets of the show here.