"We use quotation marks to indicate awareness of complexity, layers of provenance, but the layers are there, whether or not we mark them. "

Propaganda and Product Placement in Fiction and Speech 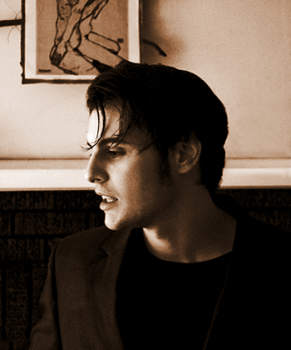 Some of the most complex and weighty signifiers are brand names, celebrity names, clichés, and propagandist phrases like “axis of evil.” These categories overlap: celebrity names are brand names, brand names are propaganda, propaganda is cliché, etc. “Axis of evil” is a place to start because of its obviousness. No educated person I have met can vocalize this phrase without quotation marks implicit in the vocal texture. What do these quotation marks mean? I think they mean we don’t wish anyone to think we are complicit with the ideology behind the phrase.

We use quotation marks to indicate awareness of complexity, layers of provenance, but the layers are there, whether or not we mark them. The marks, the layers, are often far from obvious. How many pairs of quotation marks surround the words and phrases we employ in our speech, our fiction? Who—how many persons—are we quoting?

I’d like to theorize that old elemental words like tungsten, barley, and ether carry no hidden marks. So many hands and tongues in so many eras have employed these words that the number of sources one quotes when writing tungsten approaches, for our non-mathematical purposes, infinity, and thus, essentially, zero. Tungsten may be written without complicity with any particular ideology. It is as if we’re quoting everyone from every time, no one from no time.

There are direct quotations like “hope is the thing with feathers” and “arrows of outrageous fortune” that carry a single, simple pair of marks (until an advertising campaign bescumbers them, next year perhaps). These, if one is not too insecure, need not be marks implying ideological distance, but simple marks of credit given, maybe even reverence—not that there’s no ideology involved in quoting Dickinson or Shakespeare, only that this ideology need not be more disturbing than that which allows writers to believe in, for example, university education.

Then there are words like “God,” which are old and carry many pairs of hidden marks. But certain dominant ideologies command the lion’s share of the sources we quote when we write or say “God,” and so we should be careful when we do, if we wish to avoid appearing complicit with certain old, but far from finished, ideologies.

Idioms like lion’s share come from a particular source, in this case, probably Aesop. Such phrases, my gut sense (probably Old Testament) tells me, have transcended direct quotation, transcended cliché, and are as safe as compound words like wheelbarrow and passersby.

Word usages too young to have become elemental and free of their sources, but too promiscuous, too ideologically contagious, to carry just one pair of marks—these are often called clichés. “Axis of evil.” “Love of my life.” “Forever young.” “Prince Charming.” “The usual suspects.” I put one pair of marks around each phrase, but each of these is radioactive with billions of hidden quotation marks. Read them aloud: hear the warp in your voice. Whether or not these may have had their spores in incorrupt terrain, they now sprout everywhere, like mushroom clouds out of the mouths of babes, pop stars, and politicians alike. To employ such phrases without implied or actual quotation marks is to be complicit with the dominant ideology of the present, an era of banality and advertising (among less excruciating features). To use clichés is to quote everyone from this time, not from every time.

Brand names? Names of Hollywood actors? I’ve seen two techniques succeed. Some writers critically allow words like “Toyota,” but assiduously quarantine them in the mouths and minds of characters, as in DeLillo’s White Noise. Other writers boycott brand names and clichés entirely—they know that, given all the hidden marks, the sheer number of allusions, not to Dickinson or Shakespeare, but to greeting cards, commercials, TV movies, pop songs, blogs—they know the weight of a brand or cliché is so vast that it (if I may be forgiven a metaphormorphosis from fission to fusion) distorts a page of art like dropping a dwarf star into a duck pond.

Filmmakers understand product placement. Fiction writers often don’t, I think because no corporation cares enough to pay a novelist when she allows its carbonated beverage in her book. Then how do we refer to objects in our branded world? Why not undermine the corporations that refuse to pay us? Why not cultivate a more scientific and poetic method of description, getting at what branded objects are, in fact, composed of?

Even “Toyotas” are composed of numbers, particles, geometries, up to the level of the periodic table, up to substances like water, coolant, plastic, leather, up to abstract features like design, price, Japaneseness. Even Hollywood actors are muscle, bone, neurons, archetypes, stereotypes, postures, pouts. Each actor has a price and nationality.

What of a can of cola? An uncritical artist might be inclined, simply to save time or to reflect what seems to him “the real world,” to call the soda by its brand. The brand may be a single word, whereas a can of cola uses three, and fiction succeeds by economy.

I think it’s rather “plain to see” at this point, though, that those three words weigh/cost much less than a single brand name with its billion hidden marks around it. Even a juggernaut construction like aluminum cylinder of fructose-laden, cinnamon-vanilla flavored carbonated water is a much more economic (and, I’m tempted to argue, interesting) use of language than whatever brand name “stares back at you” from the can.

None of this is to say there aren’t situations in which a brand name with all of its tremendous weight is just the sign a writer needs. The can of cola in McCarthy’s The Road is an example. Never drop anything weighty without complete awareness of that weight, without a careful system of contextual counterbalances. McCarthy uses no less than an Armageddon to counterbalance one “Coca-Cola.”