"For fiction to have the power to reveal truth, it must come to terms with the uncertainty of fact, which ironically invites honesty."

"Ethnographic fiction, and all fiction in general, depends on Kierkegaardian leaps of imaginative faith, which is not the same thing as an 'anything goes' world in which facts don’t matter." JT Torres on variation and verisimilitude.

When I was a child, my grandmother taught me how to tell stories. My mother would say she taught me how to lie. I spent the rest of my life trying to understand the difference. For my grandmother, hyperbolic stories of her life in Cuba and later as an immigrant revealed meaningful truths that only emerged in the telling of her experiences. So many times, she’d change details, even entire conflicts. In one particular story told, a ghost of a general in Batista’s army came to her in her sleep and threatened to give her nightmares. In another version, this same ghost visited her older sister, who often bullied my grandmother, and confessed his love to her. Almost every time she told a story, and especially when the story varied from a previous telling, my grandmother’s face would light up with insight, like she finally solved a lifelong mystery.

I think I know exactly how she felt during such moments. I have spent the last seven years engaged in an arts-based ethnography in Cuba, applying literary fiction as a research methodology. The ethnography explores the cultural identity of the Arará through the performance of dance, storytelling, and ritual spirit possession. Most interlocutors in Cuba have more than one version of the various stories about particular deities and important elders, and some stories are better-known and more widely shared than others. Based on elders’ relationships with us as researchers, information may or may not have been shared. And, of course, there is always the dubious nature of memory. The most challenging task of this work has been weaving together the various versions. While translating shared narratives into text, I had to untangle multiple interviews and recast them in a way that honored the differences emerging in each telling, each containing a potential flash of insight. At the same time, I felt the playful spirit of my grandmother, revising stories until they made sense, and the serious spirit of my mother, holding stories accountable for their content. 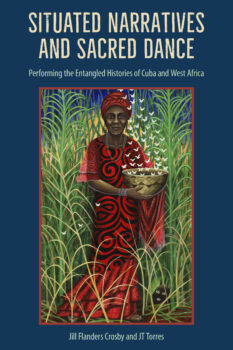 For the literary author, the entanglement of truth and fiction in any story told is not surprising. But for the ethnographic author, this entanglement becomes much more complicated. Not only do interlocutors share “fiction,” so to speak—those tales and stories typically conveyed via oral traditions—with ethnographic researchers, but those researchers later craft a different kind of “fiction.” The oral narrative, with its inherent nature of change based on each telling, becomes fixed on the page, following conventions recognizable to an academic community. The stories cross genres, pushing beyond layers of interpretations. Literary fiction may have unreliable narrators, but reliability is a criterion of evaluation for ethnographic fiction. Considering ethnography’s colonial history, however, it is highly problematic for privileged researchers to determine what is “fact” and what is “made up” in the stories they encounter, especially when those stories come from historically disempowered communities. Considering our current anti-science, post-truth, and alternative fact culture, on the other hand, it is appropriate to determine what is “fact” and what is “made up.” Even Salman Rushdie confessed to feeling a “personal revolt against magic realism” in the wake of Trumpian disinformation.

My work as both a literary and ethnographic author has required a deep sensitivity to these tensions. This year, my first book-length fiction will be published. The story is a reimagining of my relationship with my Cuban-born grandmother. It explores questions I’ve always had about how my grandmother’s migration from Cuba shaped her memory, mental health, and home. Also this year, my first book-length scholarship will be published. Co-authored with dance researcher Jill Flanders Crosby, this book documents the seven-year ethnography described above. Using fiction (and its unreliable qualities) alongside ethnography (and its demand for reliability) to explore Cuba from different vantages is both challenging and illuminating.

In order to move beyond the true/false binary of storytelling, it is important to remember what it means for the “made up parts” to express “what really happened.” Rather than thinking of fiction as a banner behind which to hide facts, we must remember how it can serve as a method of inquiry requiring complete honesty and imagination. “Sp’ange” is one classic example of how ethnographic fiction works in ways that honor truth while also avoiding any judgment of fact. Ethnographic authors Susan Finley and Mack Finley encouraged the homeless youth that informed their work to tell stories about their experiences.

We encourage our participants on introspection about their own psychological development and we invite reflections about their experiences of people and places. Then, as researchers, we retell the stories that we have been told. As collectors of life stories, we intend to present these tales in ways that make the unfamiliar familiar. That is, life history researchers attempt to render texts that will acquaint their readers with the life events of people that they otherwise might not come to know.

For Finley and Finley, the extent to which the stories qualified as fiction did not at all matter. Their reflections and introspections took the form of poems, vignettes, and stories. What matters in “Sp’ange” is the interpretive opportunities. To know ourselves is to know a story, suggested Paul Riceour. The knowledge we carry of who we are is always situated in the signs and symbols of the stories being told around us. The study of culture, then, opens up the ethnographer to these stories, allowing a deeper analysis into how those cultural stories have shaped our being-in-them. The choice of fiction is itself a revealing truth. For instance, when anti-maskers spread sci-fi tales of a “plandemic,” including the insertion of micro-chips in vaccines, the choice of conspiratorial storytelling reveals critical truths for our culture, such as the deep distrust in science that education must address. Understanding that fiction is still bound up with truth reminds us not to return to the positivist notion that fiction and nonfiction can clearly be separated. These are the same arguments that have disqualified, for instance, indigenous stories of relating to our environment—stories that we desperately need to consider as currently truer than the one we have been telling about the exponential growth of industrialization.

It may not be possible to conceive of any kind of knowledge outside of fiction. The raw matter of experience at some point, in order to be shared, must be arranged and delivered in a particular way. Vladimir Propp offers the terms fabula (the chronological order of events as they occurred) and syuzhet (the storyteller’s arrangement of the fabula in the telling). Consider the hypothetical situation in which two people observe a car accident (fabula). One person reports: “The black car came out of nowhere and slammed into the red car.” The other testifies: “Both cars collided when the red car crossed the intersection.” Both witnesses have arranged the fabula into narratives (syuzhet). The first report implicates the black car is at fault by syntax alone. The black car, as the sentence’s subject, slams into the red car, which, by virtue of its placement as the sentence’s direct object, is framed as the victim. In the second testimony, the sentence implies shared guilt between both cars, but does shift the attention to the red car, which has become the acting subject. As is apparent with this very simple example, grammatical features inherent in the syuzhet alone can communicate particular meanings, which suggest that “nonfiction” as a pure, unadulterated form of storytelling that is an exact transmission of the facts is not possible. Always at play is some level of invention (the etymological root of the word “fiction” is “fingere,” which translates to “invention”). The questions become: at what level of language does fiction occur? Does a narrative act of fiction emerge when a certain amount of words are combined to have a particular effect, or do traces of fiction come into play at the micro level of grammar, such as gender pronouns in Spanish? Assuming, just for the moment, the possibility of the extreme, that all language is a narrative act, then even attempts to avoid fiction is itself a fiction.

Ethnographic fiction, and all fiction in general, depends on Kierkegaardian leaps of imaginative faith, which is not the same thing as an “anything goes” world in which facts don’t matter. For fiction to have the power to reveal truth, it must come to terms with the uncertainty of fact, which ironically invites honesty. Change and variation, therefore, are not threats to reliability or trustworthiness. Quite the opposite, change is part of the truth revealed through fiction. Truth typically emerges at the intersections of various narratives. Each time my grandmother varied her story, the question is not, as my mother always asked, “Why do you lie?” Rather, the question should be: “What does the change in the story mean?”