Asked about his childhood religious beliefs by an interviewer, Robert Stone once said, “I was in that very difficult position you get in when you really believe in God, and at the same time you are very angry: God is this huge creature who we must know, love, and serve, though actually you feel like you want to kick the son of a bitch.”

Throughout his career, Stone has drawn upon this confluence of anger and belief—and the despair that often results—to create some of his most resonant work. At their best, Stone’s portrayals of men and women guided (and misguided) by faith in the face of the tragedy, horror, and just-plain-ugliness of the world amount to a genuinely compelling—if profoundly disturbing—theodicy. And none of Stone’s portrayals is more compact and intense than that of Mary Urquhart in “Miserere,” the opening story from the collection Bear and His Daughter.

“Miserere” begins with Mary, a librarian, reading Prince Caspian—that unabashed allegory of the triumph of divine goodness over human evil—to a group of kneeling schoolchildren. It ends, twenty pages later, with Mary herself kneeling before the altar of a church. Early on, in sharp, dispassionate language typical of the story as a whole, Stone sets the scene:

They closed within the hour because the New Jersey city in which Mary worked had scant funds to spare for libraries. It was largely a city of racial minorities, in the late stages of passing from the control of a corrupt white political machine to that of a corrupt black one. Its schools were warrens of pathology and patronage. Its police, still mainly white, were frequently criminals.

In the following paragraph, Stone shows us streetlights whose fixtures have been “torn away by junkies for sale to scrap dealers” and “patchy reefs and banks of soiled frozen snow on the ground.” Yet there is beauty here, too, though it may be cold and distant: “At the western horizon, across the river and over the stacks and gables of the former mills, hung a brilliant patch of clear night sky where Venus blazed.” 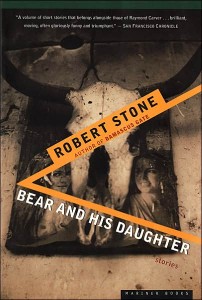 Mary is a woman compelled by her Catholic faith to undertake a mission, the objective of which I won’t reveal except to say that it is both pitiful and grisly. “Don’t you understand?” a priest asks her at one point. “People accuse us of violence! And you are violence!” And he is right. “Miserere” is not Prince Caspian; it is not a story about good versus evil, beauty versus monstrosity, or gentleness versus violence. In Mary’s world, such distinctions are meaningless. The church in which Mary kneels at the story’s end is an awful place, “an Irish-Jansenist nightmare of tarnished marble.” The story’s closing passage, though brief, contains the most disquieting and deeply moving encounter with the supernatural I’ve yet found in contemporary fiction.

In its moral outlook and its unflinching eye for the tragic and the monstrous, “Miserere” is bleak, harrowing, and incredibly brave. It’s a story I return to regularly, and each time I am amazed by its artistry and deeply troubled by its darkness—the same way Mary Urquhart must feel, kneeling in that church.