"And yet there’s a voice that makes you read on."

"How the writer views the world, their unique angle of vision, is what can draw us in by inviting us to briefly leave behind our familiar vantage point." Kent Kosack on the power of observation in Dorthe Nors's "The Heron."

One of the reasons I read is to get out of my own head. There are a lot of storytelling tricks that can do this: compelling characters, high-stakes plots, striking settings, resonant themes. But, more often, a writer’s voice is what most pulls me out of my own story, the story of my life, and into one of their creation. This voicy-ness is hard to pin down and define but a crucial component of it comes down to, I think, what the writer directs us to see. How the writer views the world, their unique angle of vision, is what can draw us in by inviting us to briefly leave behind our familiar vantage point. One such example of this that I keep coming back to in the creative writing classes I teach is Dorthe Nors’s “The Heron.” Originally published in The New Yorker, it is one of many gems—tight, bleak, and funny—in her collection Karate Chop published by Graywolf in 2014. 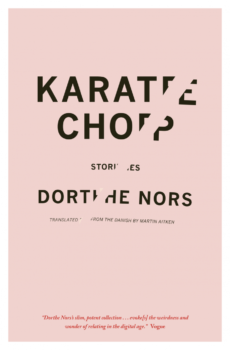 Not much happens in the story. Nor is the main character—the only character, a first-person narrator strolling through a park, crotchety, bitter, lonely, and, clearly, in how much he resents the life blooming all around him, afraid of his impending death—very likable. And yet there’s a voice that makes you read on. A voice that belongs to a narrator who is characterized solely through the way he observes the world. Whereas most of the other park-goers would probably think happy, sunny, picnic thoughts, he compels us to think about the filthiness of the herons. Rather than feed them, in the first paragraph he notices “one slouching on the back of the bench, with its long, scrawny neck. Its feet were completely white and it barely reacted when I walked past.” This is a pathetic bird and yet the narrator feels a kinship with it, “the way the wind ruffled it neck feathers made me want to go back and sit down next to it.” We get, through the narrator, a seemingly objective assessment of the bird in the world in all its ragged loneliness. But then he goes on to offer his opinion on it, reading into the bird as we, in turn, read into him: “It was the way the suffering had to be drawn out like that, the way the herons never really muster the enthusiasm.” Neither can he, it seems, muster much sympathy for the animal beyond feeling sorry for it in passing.

Nors goes on, in the remaining four pages of the story, to show us the park Frederiksberg Gardens (one of the largest and most attractive greenspaces in Copenhagen, according to Wikipedia, with a 4.6-star rating on Google) through the eyes of this sad old man. The envy and disgust he feels towards the young mothers and their youth: “No one at the age of those mothers believes she needs eternal life.” Even his memories are tinged with sourness when, at the sound of a baby screaming in a carriage, he pictures his childhood friend “Lorenz skating through the mud, racing on around the pond on his pale, thin legs, long since dead, eaten up from within by sick-cell divisions, cremated and interred into the ground.”

The final paragraph brings us back to the heron, merging the man and his heron, the heron he’d seen and passed last winter, “sitting with its beard blowing in the wind and its long pale toes clutching the back of the bench. Incapable of fright, tired and sallow in its gaze, smelling of the mites that lived in its underfeathers, and I should have sat down next to it.” All the change in the story, beyond the man’s movement through the park, happens in the subtle change where the man identifies with the heron but also looks up to it. When I first read the story, I thought the word “fright” was a typo or the product of a translation error and was supposed to be “flight.” As in the bird was grounded, stuck in the park like the narrator. But, of course, “fright” is right. And we feel that in the note of envy in the character’s voice. A fearless bird becomes an object for a frightened man to observe and admire. So concrete are the details Nors includes, so specific the perspective of the narrator, that after my fourth read through, I almost feel like I’m on the bench with them, reader, narrator, bird.