Win a copy of Skip Horack's collection The Southern Cross

I am often skeptical of reviews by people who know the author: sometimes they’re a bit too chummy, like Sarah Palin praising Glenn Beck. (Ew. Just—ew.) So let me start off by saying that I do know Skip Horack, but only slightly. We met at the Bread Loaf Writer’s Conference in 2009, and though we chatted a few times, this is the moment that stands out in my mind. It was a very hot August day, and I was trudging back to the dining hall in search of a cold drink when Skip and his roommate (the poet Matthew Dickman) hailed me. They’d dragged a couple of Adirondack chairs out into the middle of the lawn, and when I came over, they graciously offered me a seat and a beer from the ice-filled garbage can that sat between them. When my roommate passed by, we called her over too. Soon there was a small crowd of us lounging in the grass. Someone brought out a stereo. Someone else started an impromptu game of baseball, and we watched while Willie Nelson and Johnny Cash crooned in the background. It had nothing to do with writing, but it was one of my favorite moments of the conference. 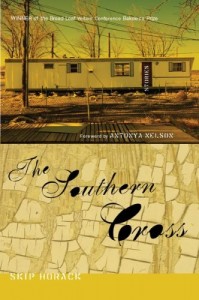 I hadn’t read any of Skip’s work before the conference, but I made a note to myself to pick up his collection, The Southern Cross, as soon as I got home. Set in the Gulf Coast in 2005—the year of Hurricane Katrina—the collection is timely and relevant in the way the very best fiction is. Unlike the characters in the book, we know what’s coming their way, so a short exchange like this, from “The Journeyman,” fills the stories in the first half of the book with eerie foreboding:

“Yeah?” Clayton slid the socket onto the drain plug, grunting as he gave the wrench a hard twist. “About what?”

“God and Jesus are up to something.”

A car alarm started up just a few blocks over, and Clayton grinned to himself. “Yeah,” he said. “I imagine they will.”

The collection has no fear about facing the horrifying details of the storm. Take this passage, from “The Redfish,” the story in which the hurricane arrives:

Gray light filled the trailer and Luther sat up and put on his boots. Water was flowing beneath him; he could hear it. He walked across the living room and opened the door. “Fuck,” he said.

The Pearl had overflowed its banks and flooded the woods surrounding the trailers. Pines blew like wheat in the wind; the clearing was a white-capped sea. The water lapped at the front steps, and Luther realized it was still rising. He watched as a gust of wind sent a wave surging through the pine forest. Water slapped against the top step of the trailer and soaked his feet. He saw that Shonda’s Dodge had been swept off in the night. […]

The wind picked up even more and started snapping pines. A heavy branch crashed nearby and Luther flinched. Betty tried to close the door herself but he stopped her. “No,” he said. “You gonna make a tomb out of this trailer.”

Betty pinched him on his arm but retreated to the sofa. The water was past their ankles, and she kicked off her wet slippers. “All my things are getting ruined,” she said.

Luther admitted that they were. “Still,” he said. “Ain’t nothing in here can’t be replaced except me and you.”

Betty took up the family Bible resting on her warped coffee table. “That’s not true at all,” she said. “Not one damn bit.”

But I’ve probably given you the impression that The Southern Cross is a Book About Katrina, and that’s wrong. Most of the stories make only passing reference to the storm and its aftermath, if they mention it at all. The storm, of course, affects the characters’ lives profoundly—because this book is so firmly rooted in the world of the Gulf Coast. The real story here is not the storm but the lives and worries and fears of the people who inhabit this world. John L’Heureux aptly described the stories as “explor[ing] the geography of a place and a time and a people—and they explore it unforgettably”; Pia Z. Ehrhardt noted that “[e]ach of these deeply felt stories is an offbeat song of the new South”; Eric Puchner praised Horack for “unbuckl[ing] the Bible Belt to show us an America we tend to ignore.”

Now, I don’t believe in writing as tourism, or reading fiction to “learn” about a different place or culture. So while you will, indeed, get a vivid portrait of the world Horack so deftly evokes, learning about the South is not the reason—or at least, not the main reason—to read this book. This is: you’ll be amazed by Horack’s generosity and vision as a writer. As Antonya Nelson, who chose the book as the winner of the Bakeless Prize, noted, “Every one of these stories serves up a unique world peopled by individuals who could, each of them, star in his or her own series. They are all epic-worthy.”

It’s impossible to read the collection and not be impressed by that writerly eye, that depth of understanding even in a story just a few pages long. You can literally open The Southern Cross to any page and find a knockout moment. Take the opening lines of “Borderlands”:

His setter found her in a cold canebrake, half-buried in the loam, her mouth sealed with duct tape. Wes saw that it was her, Sara Champagne.

You could stop right there and wallow in the sad perfectness of that name—Sara Champagne—but then you’d miss the second half of the one-two punch that follows:

Three fingers had been cut from her right hand, two from her left. She was naked to the waist, and a thin red tear ran from the base of her throat and then down across her belly.

This is the kind of collection you enjoy as a reader and then read again and again as a writer, trying to figure out how he did it.

In your comment, tell FWR about a story collection you love (or one you’re looking forward to reading): on May 31, we’ll do a drawing of commenter names, and one lucky winner will receive a copy of The Southern Cross. To be eligible, your comment must include the name and author of a story collection. Feel free, if time permits, to tell us more about the book. We look forward to hearing from you!

And stay tuned for two more story collection giveaways from FWR’s bloggers on May 20 and 24th.

If you write for another blog or lit site and would like to join the Short Story Month Giveaway Project, learn more here.