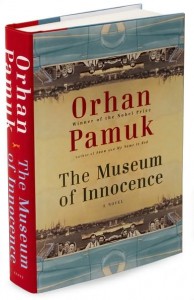 The Museum of Innocence, by Orhan Pamuk

Like most of us, Orhan Pamuk’s narrator Kemal rushes through his happiest moments in a preoccupied haze, only appreciating them in hindsight. A true materialist, he seeks to recreate them through his collections of mementos large and small, iconic and insignificant. His “museum” in The Museum of Innocence (Knopf, 2009) is a diorama not only of Kemal’s own nostalgia, but of Turkey itself in the late 1970s.