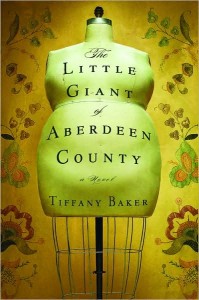 The Little Giant of Aberdeen County, by Tiffany Baker

Tiffany Baker’s debut novel, The Little Giant of Aberdeen County, contains an apparent contradiction in its title: a little giant? Truly Plaice, the character so dubbed, is no Paul Bunyan: she doesn’t tower over rooftops or create canyons with her feet. But she’s plenty big enough to cause a stir: at five, she’s two inches taller than her seven-year-old sister, and she just keeps growing bigger and heavier. So she becomes known as Aberdeen’s “little giant,” a position that shapes her fate. And that oxymoron encapsulates this whimsical novel, which is, at its heart, about the yoking together of opposites.