Lee Goldberg teaches Literature and Composition at LaGuardia Community College. He has an MFA from New School University and hosts a monthly reading series calledThe Guerrilla Lit Fiction Series. Check it out. Right now he is finishing his first novel, Eating the Sun. He is a Native New Yorker and dreams of writing a book that reviews all the best pizza in the five boroughs. Some of his favorite books are F. Scott Fitzgerald’sThe Great Gatsby like everyone probably says, along with Demian by Hermann Hesse, The Razor’s Edge by W. Sommerset Maugham, Jesus’ Son by Denis Johnson, and anything by Hemingway or John Irving.

Jonathan Tropper’s latest novel, This is Where I Leave You (paperback: Plume, July 2010), mines the hilarity from dysfunction in a belated coming-of-age story. After patriarch Mort Foxman passes away, the Foxman clan is forced to sit through what might be the craziest shiva of all time. 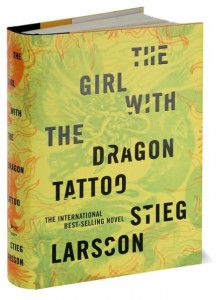 The Girl with the Dragon Tattoo, by Stieg Larsson

Published posthumously, this international bestseller is the first novel in a trilogy of crime thrillers by Swedish activist-journalist Stieg Larsson. A publisher struggles to clear his name and save his magazine by helping a rich businessman investigate the mystery of his missing niece.

A Tale of Two Vegases