Divisadero follows three characters through childhood to adolescence on a farm in Northern California’s gold country, a world where the boom is long gone but danger and desperation linger. 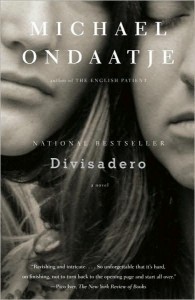 At the center of Michael Ondaatje’s novel Divisadero is a triangle of characters: Anna, whose mother does not survive childbirth; Claire, who is born the same week as Anna, and whose mother dies the same way; and Coop, whose family is murdered when he is only four years old, and is raised, by Anna’s father, as a sibling to Claire and Anna. The novel follows these three characters through childhood to adolescence on a farm in Northern California’s gold country, a world where the boom is long gone but danger and desperation linger. Here the family lives until tragedy strikes again and the siblings scatter.

Coop flees to the Tahoe area, where he transforms himself into a successful poker player and card sharp. Anna runs away to France, where she settles in the house of Lucien Segura, a minor poet from the early 20th century. And Claire lands in San Francisco, working for the public defender’s office; she lives on Divisadero Street, formerly the border between the old city and the fields of the Presidio. All three find ways to avoid or bury their traumas: Coop in chance and risk, Claire in compassion, Anna in research and writing. New, makeshift families replace abandoned ones, and it is this search for lost connection and wholeness that motivates each character in Divisadero, that pushes them towards lives of isolation or service or danger.

Ondaatje allows his roaming intelligence to move through shifting times, landscapes, points of view. He uses historical contexts, scenes and authors from French literature, and information about natural systems and ecologies to illustrate, through reflection, the physical and metaphysical unraveling of three lives affected and defined by trauma.

The narrative jumps—as in his Booker Prize-winning The English Patient—from character to character, forward and backward in time, defining this novel’s structure. The book’s first and longest section contains all three siblings’ narratives. Then the story leaps to France, focusing in on the life of Lucien Segura, Anna’s poetic subject, in the time of the First World War. At the novel’s end Segura emerges as Anna’s foil and avatar as both their lives are transformed by grief and isolation. We are invited to imagine Segura’s role in the healing of Anna’s emotional wounds as she lives in his house, reads his journal, and meets his acquaintances.

Ondaatje’s writing is at times miraculous: the layers of imagery, the beauty of his language, the intuitive yet unconventional structure. But there is something unsatisfying in the constantly moving-and-searching narrative. Paradoxically, it the strangeness and intensity of Ondaatje’s voice that makes his work so appealing. This is a world where nothing is unimportant, where every moment is meant to communicate some epiphany. A near-fatal bout of diphtheria is treated with the same gravity as the learning of a card trick; the betrayals of lovers and spouses are articulated with the same passion and reverence as a description of a clockmaker’s tools or the call of an invisible bird. Ondaatje’s is a gospel written entirely in illuminated letters, each element so exquisitely rendered that finally, it overwhelms us. The constantly shifting library of signifiers and associations makes the world and story seem magical, but it can also become exhausting.