Under the Poppy, by Kathe Koja 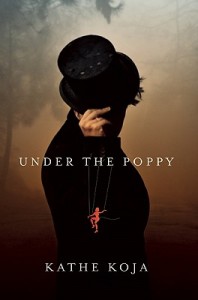 Reading Kathe Koja’s latest novel, Under the Poppy, is akin to spending an evening in a Victorian-era opium den designed by Tim Burton and hosted by Baz Luhrmann. At once seductive and uncomfortable, Koja’s world exists in the flash and shadow between fantasy and reality, rarely coming up for a linear breath of clarity. Narrative voices melt into one another, backstories are unreliable and often unspoken, and all the while a nameless war advances on a nameless city wherein our colorful characters struggle to survive their impending doom—and each other—in a theatrical brothel called the Poppy.

All is not well, and will likely not end well, but, in the meantime, why not settle in for a show?  Fancy a tumble with a creepy, too-human puppet that might steal your soul? Right this way! Hungry for the glitter of a decaying ingénue or the haunting melody of a voiceless musician? Tickets, please! Lusting after a man who’s been lusting after your brother across countless years and countries? Ladies and gentlemen, have we got a show for you! As our ringmaster reminds us, “The theatre’s not only art, messire, it’s magic, too. Sometimes the best magic is made in the dark.”  And it’s all here, in the darkness under the Poppy…

Rousing us from our opium-induced haze are a few uncontested plot points. Decca is the madam of the Poppy, and although that’s not her real name, it’ll do for now. She manages the business and its players (who service clients both onstage and off) alongside Rupert, her longtime unrequited love, who just so happens to be in love with her brother, Istvan, a traveling puppeteer. As war advances on their nameless town, Istvan returns to Decca and Rupert to stage a new show at the Poppy. His latest creation, a disturbing puppet named Pan Loudermilk, is “more accomplice than mere tool…this Pan seems to honor no limits, to see with his bright blue gaze whatever secrets one would most keep hidden.” With Pan and the rest of his intricate puppets, who he calls “les mecs,” Istvan strikes a match that soon has everyone—the players, the patrons, and the advancing army—up in flames.

Koja tells her story in two acts, the first at the Poppy on the edge of a warzone, and the second at a new theatre called the Blackbird, in another unnamed European town somewhere outside Brussels. Although many of the primary characters follow through, some (most notably Decca), all but disappear from the story with the Poppy itself, making the second act feel slightly less complete than the first. At the same time, other story arcs seem to reprise themselves, as if the characters are awakening from an opium dream to find the players changed, but the story ongoing. Under the Poppy is not an easy book, and its challenges are purposeful, as if Koja is daring the reader to let go and give in to the dream. It is also not a perfect book; some of the repetition and narrative breaks feel less like artistry and more like they could have used a final round of editing. But these are minor concerns when weighed next to the fully realized world and characters that Koja has created. Her use of descriptive language is particularly elegant; of Decca, she writes, “Diana the huntress might have had such eyes, were she born in the gutter with no string to her bow and one arrow only to employ.” In a single, evocative sentence, Koja has told us everything we need to know.

There is a moment early in the book when Istvan confides to Lucy, one of the Poppy girls, “We are so much alike, you and I…both of us vendors of the art of the moment, the impermanent pleasure, the will-o’-the-wisp that lifts a man from the prison of time, and for just that moment sets him free.” Another Poppy employee overhears Istvan’s words from the doorway and remarks, “Why, it’s poetry.” And it is. It may be twisted, dark and opium-fueled, but what Koja has written in Under the Poppy is nothing less than poetry.