This fall has been an exciting one for Fiction Writers Review. Shortly before Labor Day, we launched our Facebook page and began our ongoing Book of the Week promotions. Each week we’re giving away several free copies of a featured book we love. No catch, no gimmicks. To be eligible for this and all future drawings, just become a fan of our Facebook page.

This week we’re excited to give away signed copies of Michelle Hoover’s debut novel, The Quickening; to learn more about the book, read T.L. Crum’s July review on FWR.

Here’s a quick look at some recent features you may have missed on Fiction Writers Review:

– Jonathan Liebson reviews Jake Silverstein’s Nothing Happened and Then It Did:

In what he dubs a “Chronicle in Fact and Fiction,” Silverstein’s book takes aim at the figurative and often porous boundary between memoir and the novel. The author’s real life misadventures inspire their fictional counterpart, and the fiction in turn dovetails with the next stage of his itinerary. As he hops from Texas to Louisiana to Mexico, Silverstein is like a recurring protagonist in a collection of linked stories. […] He is part journalist, part explorer, part historian, and part poet—a writer with a sensibility grounded in factual reportage, even as his mind wheels toward the fanciful.

– Brian Bartels interviews David Ebershoff (The 19th Wife). When Bartels asks if the author felt obligated to visit the places where his stories were set, Ebershoff responds: 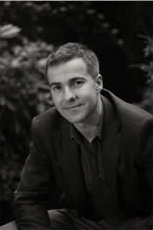 Yes, I love walking where my characters have walked, or might have. It unleashes numerous ideas in my mind. The light, the trees, the color of the soil. For me it’s important to know where the sun sits in the sky at a particular location and the degree (or lack thereof) of its warmth. I don’t always need to tell my reader this, but it helps me understand my characters. In The 19th Wife, the physical isolation of Utah in the 19th century is important to the story. The only way to experience that as my characters did is to get out there in the dust and start walking around. The desert sun in July left its mark on my imagination’s hide.

– Leslie Clements reviews Lev Grossman’s bestselling novel, The Magicians. While this book has been widely promoted as “a Harry Potter for adults,” Clements argues that it transcends such comparison, succeeding as a highly original work:

Despite the many allusions to classics of fantasy, the novel doesn’t conform to old genre equations. Grossman builds a new, subversive world on the foundation laid by his predecessors and fills it with people who look a lot like us. The result is as surprising as it is enchanting. Like Kazuo Ishiguro and Justin Cronin, Grossman is a writer who transforms the shape and expectations of genre fiction for readers on both sides of the genre divide.

– In his review of Brady Udall’s The Lonely Polygamist, Tyler McMahon writes:

Golden Richards is six-and-a-half-feet tall, has four wives and twenty-eight children, builds brothels, pisses in mop buckets, covets his boss’s wife, wrestles ostriches, endures nuclear explosions, and has a stubborn wad of chewing gum stuck in his pubic hair. Also: he’s just like you. […] In a time of partisan extremity, when marriage is used to rally bases on both sides, Udall never preaches nor defends. These characters in The Lonely Polygamist are not remarkable for their oddities or their quirks, but for their humanity. 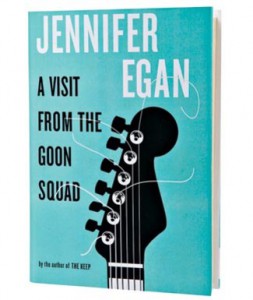 an array of stories mix into a cohesive novel, each chapter self-contained yet fluid as the grooves of an LP. Structurally, the book flashes forward in one section only to skip back in the next, shifting the protagonist’s point of view in each chapter. And yet, unlike the fragmented, seemingly unconnected world of the Shuffle, where randomization is celebrated over construction, A Visit from the Goon Squad reads as a whole, as tight as the pickup on a single-coil Fender, locked and loaded.

– In this essay, Liam Callanan uncovers the alchemy behind George Garrett’s final story, “Thanksgiving.” Callanan explores his reasons for writing this piece:

I’m happy to be drawn in as close as I can get, because that’s the kind of reading I love to do. Of course, close reading—and this I know, because I work in an English department—is never a guileless exercise. I’ll be candid about my agenda here. I want to use Garrett’s story to illuminate a tricky aspect of literary craft: narrative distance. I also want to use this essay to do something trickier, something more personal, which is to return to that path at UVA, summon up Garrett’s ghost from the bricks, and talk.

– Shawn Mitchell interviews Benjamin Percy (author of the collections Refresh, Refresh and The Language of Elk), whose first novel, The Wilding, was recently featured as FWR’s Book of the Week. Here’s an excerpt from Percy, on why he loves the short story form:

Benjamin Percy. Photo by Jennifer May.

You can’t write a perfect novel, but you can write a perfect short story. There is of course something ethereal at work, but the mechanics of storytelling can be deconstructed, observed the same as any architect’s blueprint. Up to this point, I was mapping out excavated villages, itemizing bits of bone and shell into containers, methodically recreating history—and that training transferred well into strenuous reading and writing.

– In his review and analysis of Dzanc Books’ Best of the Web 2010 (edited by Matt Bell), Michael Rudin highly recommends the anthology, offering close readings of individual essays and larger questions, like what a zettabyte of literature might be: 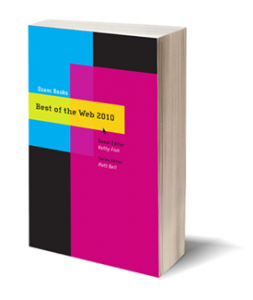 Our history with print’s first-rate publications can be a comforting force, a grid of familiar local streets against the sand-swept dunes of online. And it’s this lack of familiarity with digital’s landscape that makes Dzanc’s anthology so incredibly necessary: for new and old writers alike, it’s a guidebook as much as it is a book-book. […] Binding online stories into print provides them with access to a world they might have otherwise never known; beyond putting digital literature into brick-and-mortar bookstores, inclusion is a recognition and declaration of quality (despite understanding that any selection process is subject to aesthetics and taste). 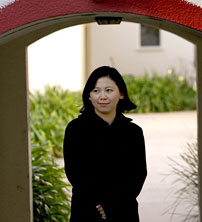 I’m not for heroism, because heroes are pretty much glorified, like martyrs. You have to put them into a position where they’re not human anymore, they’re beyond human. I’m not interested in the black and white of the world; I’m interested in the different shades of grays in between. I think that’s what fiction does. To me, that’s what you do as a fiction writer. When you are interested in the grayness of human beings, or human situations, that means nobody can be a hero, because that’s absolute. It’s so absolute it’s not possible. I grew up in this culture where heroism was a big thing. […] the only rebellious thing about that book [The Vagrants] was that I really wanted to question that and say, “Really, there’s no hero.” Nobody was really the hero in the end. Nobody was purely evil, either.

– In the essay “Finding—and Losing—Memories in Fiction,” Steven Schwartz (Therapy, A Good Doctor’s Son) writes about the “split personality” of memory, considering questions of fiction and truth. Here’s a taste:

There’s a punch to these memories in the amygdala. Intensified situations bestow meaning and focus on an event, stamping it in memory as if in concrete. But it’s what becomes of the memory in retrospect, the treatment of that memory through the years as it grows dim and perhaps even completely lost—for the concrete can turn out to be squishy—that determines how it will be used for a writer. “When a memory is recalled,” asserts Karim Nader, a memory researcher, “it returns to an unstable state, like ice melting to water. As such it can be altered and then it is stored again.” In other words, reconstituted—or, as it would be more usefully put for artists, transformed.

Want to be notified about our long-form features (reviews, essays, and interviews) when they publish? Subscribe to FWR‘s RSS feed. We welcome everyone to follow us on Twitter, and to become our fan on Facebook.