Stephen Morison, Jr.’s articles for Poets & Writers Magazine have profiled the lives of writers in Afghanistan, Myanmar, North Korea and other countries. His short stories and poems regularly appear in literary magazines in the U.S. and Canada. Based in Madaba, Jordan, with his wife and daughter, he is the Director of Arabic Year at King’s Academy, a one-year language and immersion program for American high school students. Visit his website at stephenmorison.com. 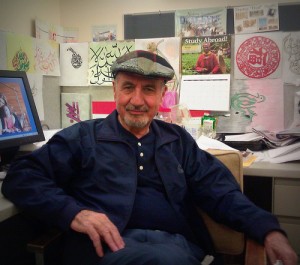 The Humpbacked Minaret: An Interview with Mahmoud Saeed

Over the past six decades, Iraqi writer Mahmoud Saeed has used his novels, stories, and nonfiction to deconstruct the political and social turmoil of his beloved homeland. In a wide-ranging conversation with Stephen Morison, Jr., Saeed describes the difficulties Arab authors face in getting published, the institutionalized barriers to freedom of expression, and his constant attempt, through fiction, to “solve the puzzle of man and his actions.”