"Even at the time of writing, the narrator is still in that state. Not grown up, nor grown wise. Just confused and full of regrets and on her own. Adulthood."

"That moment when we realize our parents are people, regular people, with flaws and separate lives we have no access to. Brought home, made palpable for the reader, in that little clattering spoon": Kent Kosack on Lucia Berlin's coming-of-age story "Itinerary."

Lucia Berlin’s “Itinerary” is a coming-of-age story distilled down to one trip, her narrator’s (based on Berlin herself) first trip by plane and alone, from Chile to New Mexico. She is leaving behind her family and her childhood, her known world for an unknown place and unknown state: college in New Mexico and adulthood. All this in eight and a half pages.

There’s a nostalgia for another time in the opening paragraph as the writer/narrator reflects on traveling in the pre-jet age, back when she and her family traveled together by boat. “The voyage took over a month. It wasn’t just the beauty of it but the crossing of oceans and continents and seasons . . . a comprehension of vastness.” A vastness that, presumably now, the narrator cannot comprehend. 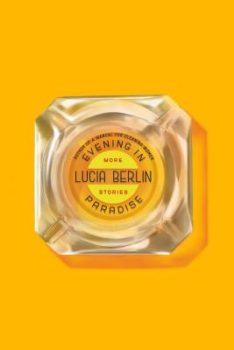 She gives the reader the whole itinerary up front. Again, that hardworking first paragraph: “DC-6 from Santiago to Lima, Lima to Panama. A long night from Panama to Miami, ocean glittering.” A list of places made palpable with that last image of the glittering ocean. This is a particular skill of hers in all her stories. A quickness to the prose in fragments, large swathes of physical and emotional terrain covered and yet without the loss of the sensory details that make characters and settings real as opposed to just ink on paper.

The rest of the story unfolds in short scenes at each spot on her itinerary. These interactions, planned by her father, advance the plot of a young woman going away to college but also reveal, in each stop along the way, her relationship with her parents and their unique troubles and the change she’s undergoing. A visit with Ingeborg, her father’s secretary (and, she discovers, lover) in Lima. She notices a photo of her father on her desk: “He was wearing an open shirt, a rose-colored shirt that I had never seen before. He was smiling. Laughing. Behind him were ruins, the Andes, clear blue sky. I sat back down in the chair. The little demitasse spoon clattered.” One look at a photo of her father happy and her whole idea of him crumbles. That moment when we realize our parents are people, regular people, with flaws and separate lives we have no access to. Brought home, made palpable for the reader, in that little clattering spoon.

Her father’s business associates host her in Panama. The Kirbys are a particularly horrible couple. He runs a shipping company, decries the “Reds,” gets drunk and calls her father “pigheaded.” Mrs. Kirby, safely ensconced in money and her Rolls Royce, is so out of touch that she needs to ask her chauffeur what season it is. The narrator’s faith in her parents, in her understanding of them, erodes further.

By the time she gets to Miami, our narrator is weary, lost and frayed. The scene at the airport is alien to her, strange and hellish.

In the airport women wore fur coats and their dogs wore fur coats. I was terrified by so many dogs. Little dogs with hair dyed peach to match the women’s hair. Painted toenails. Plaid bootees. Rhinestone or maybe diamond collars. The whole airport was yapping.

She also dreads meeting her next host, her aunt Martha that she hasn’t seen since she was five and her mother calls “a hick.”

But her skepticism quickly evaporates as Martha, wearing a red flowered muumuu, hugs her. “She crushed me to her, rocking me, hugging me. I was enfolded into the vast poinsettias on her breasts.” Vastness again! “In spite of myself I clung to her, sank into her and her smell of Jergens lotion, Johnson’s baby powder. I stifled a sob.” Martha reveals more to the narrator about her father’s past, stories of their rural poverty she’d never heard, teaching her about her family and all that she doesn’t know about them, herself, the world.

Her stopover in Miami is brief and the narrator is surprised she doesn’t want to leave Martha. She wants to stay, be hugged and mothered, eat hot turkey sandwiches and cherry pie à la mode. But her plane is boarding, as it is for all of us at that age. Is she prepared for the last leg of the journey?

A long flight from Miami to Albuquerque. I was blasé now about oxygen masks and life preservers…It was sunset as we circled Albuquerque. The Sandias and the miles of rocky desert were a deep coral pink. I felt old. Not grown up, but the way I do now. That there was so much I did not see or understand, and now it is too late. The air was clean and cold in New Mexico. No one met me.

Even at the time of writing, the narrator is still in that state. Not grown up, nor grown wise. Just confused and full of regrets and on her own. Adulthood. A bleakness to it, a sense of isolation but also, derived from it, some beauty too. In this story, in the sense Lucia Berlin was able to make of her experiences, molding them, through mastery of the form, the revelatory details and emotionally-charged image, into a short story to help us make what little sense we can of the vastness of the world as we arrive, alone, in a new place as the sun sets.