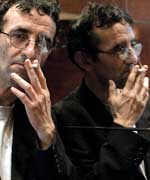 Forget the fictionalized memoir…here’s a novelist who seems to have revised his life story both on and off the page. Was Roberto Bolaño actually in Chile, as he proudly claimed, at the time of Pinochet’s military coup? Did he make up his story of heroin addiction and recovery? (His wife says he did.) Bolaño reportedly “liked to play tricks and create mysteries” and “may just have been trying to lay a trap for his future biographers.” Was he playing at being a posterity-worthy figure (not just writer)? Or was it all just an intellectual game? Manuel Llorente, the editor of […]