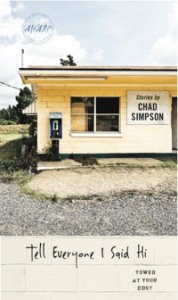 Our most recent feature was Chad Simpson’s debut collection Tell Everyone I Said Hi, and we’re pleased to announce the winners: Melanie Jennings (@mjennings26) Marisa Birns (@marisabirns) Turtleberry (@turtleberry) Congrats! To claim your free copy, please email us at the following address: winners [at] fictionwritersreview.com If you’d like to be eligible for future giveaways, please visit our Twitter Page and “follow” us! Thanks to all of you who are fans. We appreciate your support. Let us know your favorite new books out there! 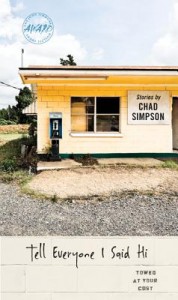 Our current feature is Chad Simpson’s debut collection, Tell Everyone I Said Hi, which was the winner of the 2012 John Simmons Short Fiction Award from The University of Iowa Press. Chad was raised in Monmouth, Illinois, and Logansport, Indiana. His stories and essays have appeared in McSweeney’s, The Sun, Esquire, Barrelhouse, American Short Fiction, and many other print and online publications. He also is the author of a chapbook of short fiction, Phantoms, published by Origami Zoo Press in 2010. A recipient of an Illinois Arts Council fellowship in prose, he teaches at Knox College in Galesburg, Illinois, where […] 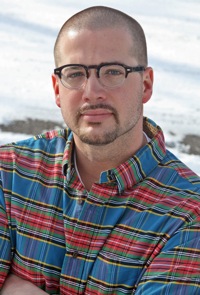 Contradictions and Ambiguities: An Interview with Chad Simpson

Chad Simpson talks with Eugene Cross about writing the Midwest, choosing his debut collection from fifty stories, and all the jobs he worked (security guard, juvenile probation officer, AmeriCorps) on his way to becoming a teacher.

First Looks, September 2012: Tell Everyone I Said Hi and BASS

Hello again, FWR friends. Welcome to the latest installment of our “First Looks” series, which highlights soon-to-be released books that have piqued my interest as a reader-who-writes. We publish “First Looks” here on the FWR blog around the 15th of each month, and as always, I’d love to hear your comments and your recommendations of forthcoming titles. Please drop me a line anytime: erika(at)fictionwritersreview(dot)com, and thanks in advance. I can’t say I wasn’t warned that Chad Simpson’s essay, “An Epilogue to the Unread”—which connects the illness and passing of Simpson’s mother, her love for reading, examples of generosity in our […]