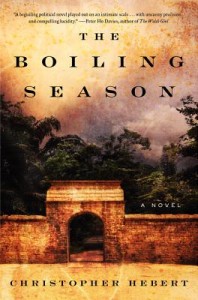 Our most recent feature was The Boiling Season, and we’re pleased to announce the winners: SamanthaBayarr (@SamanthaBayarr ) Carolyn West (@temysmom) Alexis Apfelbaum (@AlexisRachel ) Congrats! To claim your free copy, please email us at the following address: winners [at] fictionwritersreview.com If you’d like to be eligible for future giveaways, please visit our Twitter Page and “follow” us! Thanks to all of you who are fans. We appreciate your support. Let us know your favorite new books out there!

Our new feature is Christopher Hebert‘s debut novel, The Boiling Season (Harper). Hebert graduated from Antioch College, where he also worked at the Antioch Review. He has spent time in Guatemala and taught in Mexico, and he worked as a research assistant to the author Susan Cheever. He earned an MFA in creative writing from the University of Michigan, and was awarded its prestigious Hopwood Award for fiction. He is Jack E. Reese Writer-in-Residence at the University of Tennessee Libraries, and lives in Knoxville with his son and his wife, the novelist Margaret Lazarus Dean. In Michael Shilling’s introduction to […]